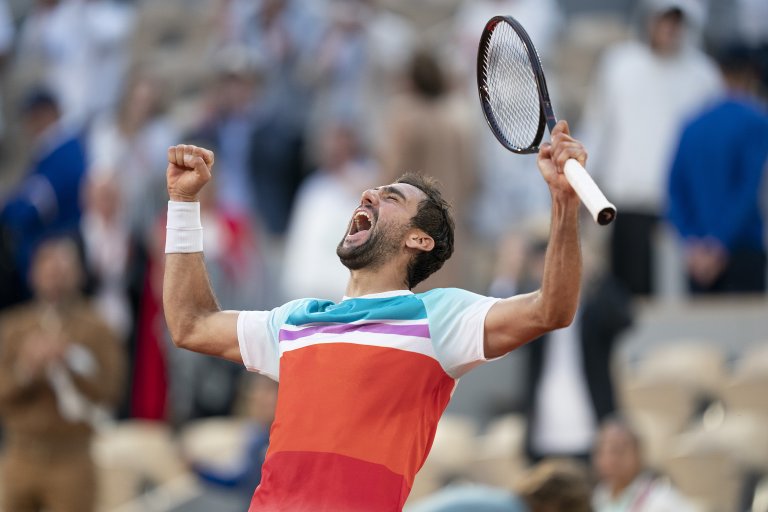 Filip Krajinovic and Marin Čilić will go head-to-head in the semifinals of the Cinch Championships on Saturday
This is the first meeting between these two
Continue below for match odds, preview, and best bet prediction

The second semifinal of the Cinch Championships will be played between unseeded Filip Krajinovic and seventh seed Marin Čilić.

Both players have put on an impressive showing at this year’s tournament, stringing together some impressive wins. This is familiar territory for Čilić, who has had his fair share of success here, whereas it’s a bit newer for Krajinovic.

Odds as of June 17th at DraftKings.

No surprise here, but Čilić is the heavy favorite to move on to the final at -400 odds, compared to Krajinovic’s +300. The Croatian player has been a favorite to win since the beginning.

On a very hot day in London, both players were showing signs of fatigue. But it was Krajinovic who was able to push through it and minimize his unforced errors.

Ultimately, Peniston was just a little less experienced than the Serbian, and there were times that Krajinovic was able to take advantage of that.

He has what should be his toughest match of the tournament ahead of him in Čilić, as he comes into the match as the underdog.

Čilić Continues to Impress in London

With his win earlier today, Čilić earned his spot in the semifinals of the Queen’s Club Championship for the sixth time. He defeated qualifier Emil Ruusuvuori 7-6(2), 6-4 on just under two hours.

Čilić was the more calm and collected player of the two. He took it play-by-play not trying to look too far into the game. He managed 11 aces, compared to Ruusuvuori’s four.

Cilic: 80-31 lifetime on grass.
Into his SIXTH semi at Queen’s, where he is a two-time champion. pic.twitter.com/JvLbQh03fE

At 33-years old, Čilić is finding ways to conserve energy, and allow himself be able to focus on the task at hand. If he continues with his strong serve, and aggressive forehands, he should be able to move onto the finals.

First Meeting Between Krajinovic and Čilić

This will be the first meeting between these two players, as their current head-to-head sits at 0-0.

It’s hard to think about betting against Čilić for this match. Everything seems to be pointing in his direction to win and book a spot into the final.

Aside from just his previous success here in London, he’s put forward a very strong performance this week, and showing that his strongest court surface is grass.

Krajinovic is very deserving of his spot in the semifinals, no doubt. He’s an aggressive player, who likes to attack the ball. But Čilić does hold the edge with baseline play, as the Croatian has shown time and time again his ability to win on baseline rallies.

This should be an exciting match, but expect Čilić to move on.