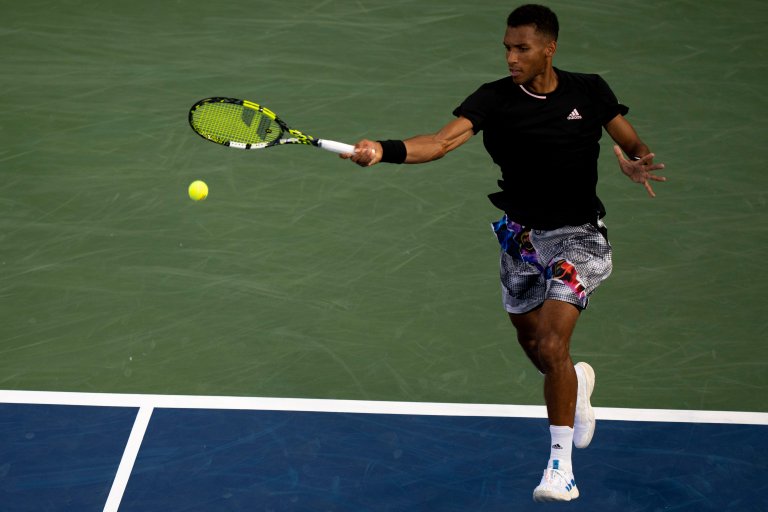 Felix Auger Aliassime returns to Jannik Sinner during the second set of their match in the Western & Southern Open at the Lindner Family Tennis Center in Mason, Ohio, on Thursday, Aug. 18, 2022.

It’s the fourth consecutive ATP Masters 1000 tournament in which he’s finding himself in the quarterfinals. Thus far, world #9 Auger-Aliassime is 0-for-3 in terms of advancing forward to the semifinal stage.

Oddsmakers are setting Auger-Aliassime as the -220 favorite to defeat Coric in their quarterfinal match in this Cincinnati-based tournament.

Coric, rated as high as #12 in the ATP rankings in 2018, underwent right shoulder surgery in May of 2021. Currently ranked #152, Coric will move into the top 100 because of his performance in the Western & Southern Open. He’s already defeated two seeded players at this event.

Odds as of August 19th at Caesars Sportsbook. Get this Caesars promo code to bet on this weekend’s matches

The match is set to get underway at 7:00 pm ET on Friday, August 19. Viewing is available on the Tennis Channel.

In the Western & Southern Open betting trends, #7 seed Auger-Aliassime was set as the +2500 co-eighth betting choice to win in the tournament’s opening betting lines. Coric is unseeded.

In the round of 16 against Jannik Sinner, Auger-Aliassime came within the skin of his teeth of heading home. He was down a set and a break. Then he donned his rally cap, staging a remarkable comeback.

He beats Jannik Sinner 2-6, 7-6, 6-1, to advance to the quarterfinals at #CincyTennis! pic.twitter.com/5OZXuqeLpo

Auger-Aliassime came charging back to take the match 2-6, 7-6(1), 6-1. He broke the 10th-seeded Sinner three times on eight break points in the match that lasted two hours and 28 minutes.

Auger-Aliassime has now reached four consecutive ATP Masters 1000 quarterfinals. Interestingly enough, he’ll be seeking to reach his first semifinal at this level since 2019 in Miami. He did so by beating Coric 7-6(3), 6-2 in the quarterfinals.

Working his way back from shoulder surgery that cost him almost a year, Coric returned to the tennis court in March. He appears to be finding his game in Cincinnati.

Against Bautista Agut, Coric needed just one hour and 22 minutes to get the job done. Coric raced to a 4-0 lead in the first set. He also got out to a 3-1 advantage to launch the second set.

Coric saved all five break-points he faced during the match. At the same time, the Croatian player was able to break Bautista Agut’s service four different times.

Auger-Aliassime and Coric have split two previous on-court meetings, both in ATP Masters 1000 events. However, those previous clashes come with caveats attached.

Coric was able to dominate Bautista Agut with his service game. The Croatian scored 16 aces, compared to one by the Spaniard. He won’t be able to do that to Auger-Aliassime. The Canadian held a 14-4 edge in aces over Sinner.

Both of these players are big hitters and are brimming with confidence. Coric is certainly in with a chance here and won’t go down easily, but when Auger-Aliassime is on top of his game, he’s tough to beat.