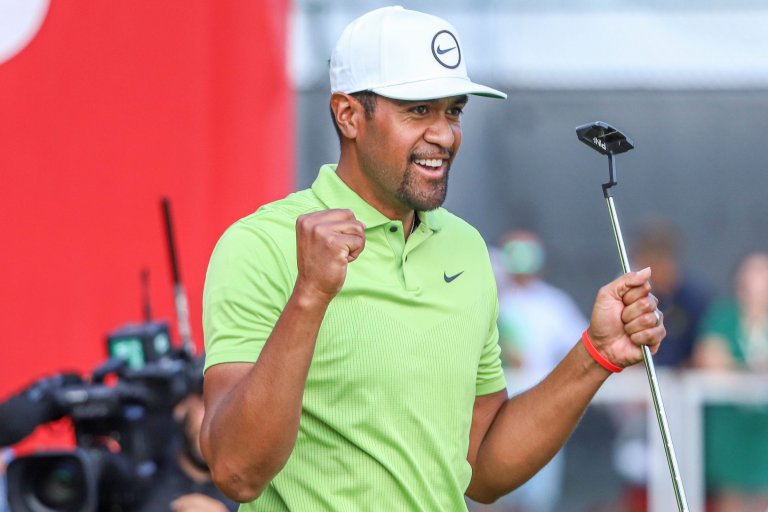 Tony Finau celebrates on the 18th green after winning the Rocket Mortgage Classic at the Detroit Golf Club.

The first part of the three-leg FedEx Cup playoffs begins this week at the FedEx St. Jude Championship in Memphis, TN. Rory McIlroy is the +900 favorite in the FedEx St. Jude Championship odds. With 122 of the top 125 players competing (Daniel Berger, Tommy Fleetwood and Lanto Griffin aren’t teeing it up), there’s plenty of opportunities for sleepers and longshots to make some noise.

Odds as of August 8th at Barstool Sportsbook.

The forecast calls for there to be a chance of a shower in the morning, with it being mainly sunny in the afternoon. Temperatures will be mid 70’s for those teeing it up first, hitting low 90’s for those playing in the afternoon. The wind will be pretty docile for the duration of Thursday, with gusts reaching between eight and twelve miles per hour, with it being a tad stronger for those finishing in the evening.

Tony Finau on a Heater

Tony Finau (8:10am tee time) has been brilliant of late, winning his last two tournaments in back-to-back weeks at the 3M Open and Rocket Mortgage Classic. As such, he’s doubled his overall PGA Tour win total to four.

He’s also no stranger to tasting success in the first leg of the FedEx Cup Playoffs, having won the Northern Trust just last year, albeit at a different course. He’s been stellar lately, and his statistics are eye popping to say the least.

Twelve of his last 16 rounds have resulted in a score of 68 or better. He’s been on an absolute tear of late, and is showing no signs of slowing down.

Playing in the same group as Finau is Cameron Young (8:10am). He’s had a phenomenal rookie campaign, posting seven top-three finishes, with five of them being runner-ups. That includes his last two starts, as he was outright second at the Open Championship, then tied second at the Rocket Mortgage Classic.

He’s also made a habit of getting off to strong starts, as he led after 18 holes at the Open, and is tenth overall in first round scoring average.

In the last 24 rounds on the PGA Tour, Young is tops in strokes gained: off-the-tee, and around-the-green. He’s also second tee-to-green and eighth in total strokes gained.

He’s seventh in birdie average and twelfth in scoring average, making him a prime candidate to jump ahead early.

Taylor Moore (7:26am) isn’t a household name, but he’s been trending in the right direction of late in his effort to become one. In the last four stroke play tournaments, his results have been as follows – T-24th, T-21st, 6th, T-5th.

In his last twelve rounds, his ‘strokes gained’ stats have been very solid.

In his last five Thursday’s, Moore has shot in the 60’s, and 15 of his last 20 overall rounds have resulted in sub-70 efforts. The caveat of course is that he’s done his damage against far weaker fields than the one he’s up against in Memphis. However, at these odds, he makes for a super intriguing sleeper option.