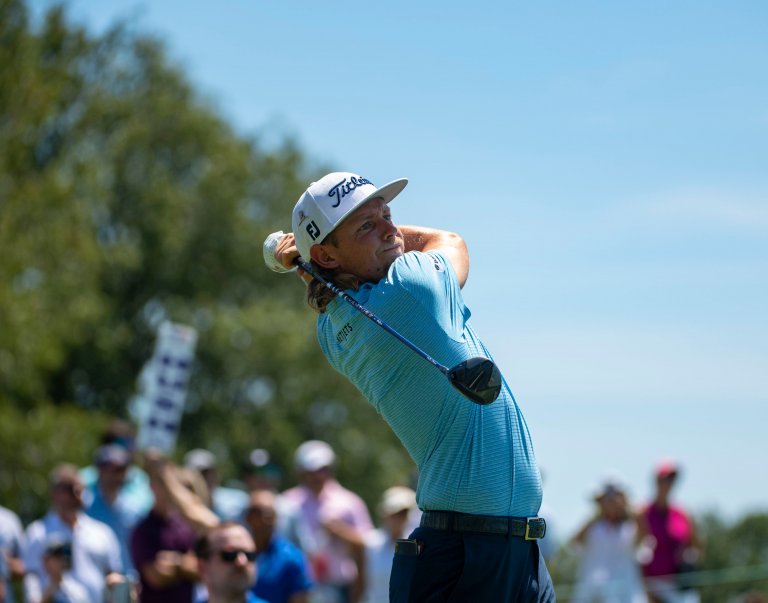 It’s a double edged sword on Saturday night for J.J. Spaun. On one hand, he’ll take a one-stroke lead into Sunday’s Final Round at the FedEx St. Jude Championship. On the other hand, he’ll have to try to get some sleep knowing that some of the game’s greats are lurking right behind him.

Cameron Smith and Will Zalatoris, two of those aforementioned elite players, are co-favorites to win the tournament despite sitting two strokes off the pace.

Odds as of August 13th at DraftKings Sportsbook

Smith is fresh off a victory at the British Open, and also won the Players Championship and Tournament of Champions earlier this year. Zalatoris meanwhile, is still looking for his maiden victory on Tour. He has, however, racked up three runner up results, most recently falling just short of Smith at St. Andrews.

With a win, Smith would move to No. 1 in the world for the first time.

Back to Spaun, he’ll look to convert a 54-hole lead for the second time in his career. He won the Valero Texas Open in April by two strokes, closing with a Final Round 69 and never showing any signs of faltering. The big difference in that tournament was the talent trying to chase him down.

There were no top-20 players anywhere close to the first page of the leaderboard on that day, while six of the top-20 players in the world are within four strokes of his lead heading into Sunday.

Smith and Zalatoris were each among the 10 shortest priced golfers before the tournament teed off. Smith has fired rounds of 67, 65 and 67 to get within striking distance of the lead, while Zalatoris stumbled out of the gate.

After firing an opening round 71, Zalatoris has rebounded with rounds of 63 and 65. He led the field in ball striking on Saturday and finished second in strokes gained tee to green. Zalatoris has made just one bogey over his past 36 holes, but has shown a propensity to falter on Sundays. He ranks 58th this season on Tour in Final Round scoring, while Smith ranks ninth.

Smith’s starts aren’t elite in any one metric this week, but that’s the case most times he tees it up. He’s excellent in all aspects of the game and the numbers this week back that up. He ranks inside the top-17 through three rounds in strokes gained ball striking, approach, around the green and tee to green. His biggest liability so far has been his putter, which is usually the strength of his game.

A man on a mission ?

Cameron Smith drains the eagle putt at 14 and extends his lead to 3 shots at #TheOpen pic.twitter.com/c6EOnUexZI

That signals that there may be some positive regression coming his way on the greens and if that’s the case watch out.

If forced to choose from the top, it’s Smith without question. He is a proven winner on Tour and wouldn’t it just be fitting for him to win this week and move to world number one just days after it was announced he’s bolting for the LIV Tour.

Sungjae Im (+2000): Two other players caught my eye heading into Sunday and each have much more favorable odds than Smith and Zalatoris. Sungjae Im is up first, who’s continued to flash the elite ball striking he displayed at the Wyndham Championship and 3M Open. Im finished runner-up in both of those events gaining 6.3 and 10.7 strokes ball striking respectively. This week, he ranks sixth in the field in ball striking and third in putting. That’s an ideal combination for someone looking to hunt down the leaders from four strokes back.
Collin Morikawa (+4000): Up next is two-time Major winner Collin Morikawa. He fired a pristine 4-under 66 on Saturday, ranking third in ball striking and fourth in strokes gained tee to green. Morikawa was once again let down by his putter, finishing 43rd for the day in that category, but if he starts rolling in a few putts early he can certainly overcome his five stroke starting deficit.