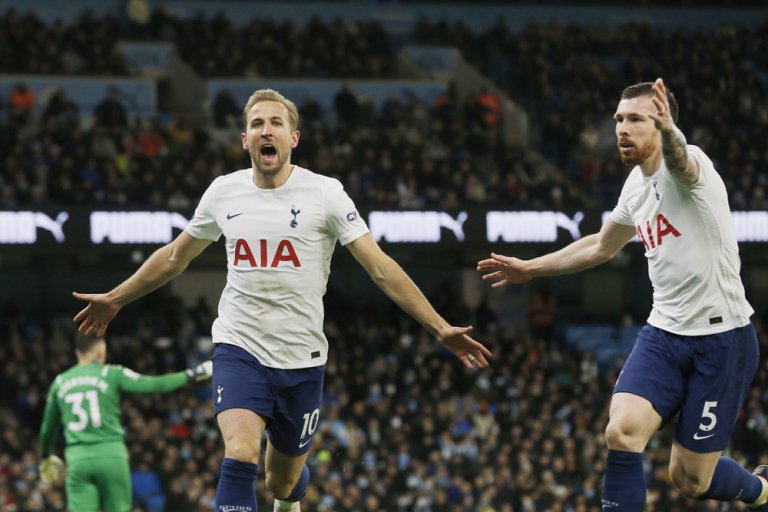 Harry Kane of Tottenham Hotspur celebrates his goal 1-2 with Pierre-Emile Hojbjerg during the English championship Premier League football match between Manchester City and Tottenham Hotspur on February 19, 2022 at Etihad Stadium in Manchester, England. (Photo by Colorsport/DPPI/Icon Sportswire) ****NO AGENTS—NORTH AND SOUTH AMERICA SALES ONLY****

The Premier League season kicks off on Friday, August 5
Man City and Liverpool are title favorites and have the highest point totals of the season
See the odds for every EPL team total and our EPL picks below

The England Premier League season kicks off on Friday with Crystal Palace vs Arsenal getting Matchday 1 started. On top of the EPL futures bets for the title, top 4/6 and relegation, plenty of alternate markets exist for betting too. Including betting on EPL team total odds for every team.

This is one of the ways to bet on soccer and is not much different than betting win totals in other sports. Each team plays 38 league matches, Three points are assigned for a win, and one for a draw. Oddsmakers have assigned a point total for each team (besides Wolves at DraftKings for unknown reasons) and bettors can bet Over or Under on each total.

Read on for the EPL team total odds for each team, plus our three best bets in the EPL futures today.

Odds at DraftKings Sportsbook as of Aug 4

Title favorites Man City and Liverpool have the highest point totals listed in the table above at 89.5 and 85.5 respectively. Meanwhile, oddsmakers have listed newcomers Bournemouth with the lowest total at 30.5.

Spurs’ are the third favorites behind Man City and Liverpool in the EPL odds. Most pundits are predicting Chelsea to take a step back this season and for Tottenham to ascend into that third place behind the two big boys.

Last season it was Chelsea in third with 74 points and Tottenham in fourth with 71.

Tottenham got off to a slow start last season under Nuno Espirito Santo at 5-0-5 with just nine goals scored. An average of 1.5 points per game (PPG) and an average of 0.9 goals per game (GPG).

After Santo’s sacking in November, Antonio Conte took over and coached Spurs to a 0-0 draw in his first match versus Everton. Conte would go undefeated in his first eight games, something no other Spurs’ manager had ever done. Conte’s season record with Tottenham finished 17-5-6, with 60 goals scored. That’s good for an average of 2 PPG and 2.14 GPG.

“I want to win the Champions League and the Premier League” ?

Antonio Conte lays out his objectives for Tottenham this season pic.twitter.com/4cJBAk9j1G

Son Heung-min had his best season ever tying for the Golden Boot with 23 goals alongside Mohamed Salah. Harry Kane finished with 17. Now they’ve added Richarlison up front who had ten goals with Everton last year.

To go over the EPL team total, Spurs will need 74 points. Something they haven’t accomplished since the 2017/18 season when they finished in third with 77 points.

But are they one win better this year than last when they had 71 points? Probably. If Conte maintains that two PPG pace of last year, they would finish with 76 points,

Fulham finished first in the EFL Championship last season with 90 points. But they are one of the favorites in this year’s EPL relegation odds. Fulham’s EPL team total is set at 35.5 points this season in the EPL futures. That is 7.5 more points than they finished with in 2020/21 when they had 28 and suffered relegation. It’s also more than the 26 points they had in 2018/19 when they also went down.

Burnley was the third team relegated last season in 18th place and they had 35 points. Only one team in the past nine seasons has been relegated with more than 35 points and that was Newcastle who finished 18th with 37 points in 2015/16.

“One or two? Fantastic, you are being really positive.”

Fulham manager Marco Silva is already complaining about a lack of resources to try and compete in the EPL this season. His squad lacks depth and senior-level players. They’re also overly reliant on striker Aleksandar Mitrovic who scored 43 of their 106 goals. Only two other players had multiple goals last year.

If you believe Fulham will continue their yo-yo pattern of EPL promotion/relegation and will be back in the Championship next season, history says reaching 36 points will be tough.

Last season Manchester United finished with a disappointing 58 points and a sixth-place finish. They won less than half of their matches at 16-10-12 while both scoring and conceding 57 goals.

They were the only team in the top eight that failed to have a positive goal-differential. Crystal Palace, down in 12th, still finished with a plus-four goal difference. Even 14th place Aston Villa was only minus-two.

And you may say, well sixth is not that far off of the top four? But it is. They were 11 points back of fifth place Arsenal and 13 back of fourth place Spurs.

Going back to their goal output, 18 of their 57 goals were scored by Cristiano Ronaldo. Next in line was Bruno Fernandes with ten, and then third in team scoring was Mason Greenwood with just five.

• Ronaldo left at halftime during the Rayo Vallecano game

Ten Hag: “There were more who did this.”

• And you accepted this?

Ten Hag: “Absolutely not. This is unacceptable. I tell them this, that’s unacceptable. We are a team, we are a squad. You have to stay until the end.” pic.twitter.com/Jj2RxjTOlu

Ronaldo has already missed pre-season time and left games early in his bid to depart Old Trafford this season. With few suitors capable, or willing to take on his massive contract, it leaves new manager Erik ten Hag’s hands tied as to what to do with the situation. He needs to play him. But he also can’t let the Portuguese superstar blatantly ignore team rules.

One way or another, it’s unlikely Ronaldo is with Man U for the duration of the season and that more drama will likely ensue.

Christian Eriksen was brought in at midfield, but he’s not the piece Man U is missing. There’s an argument to be made that Man U may function better without Ronaldo in the lineup and the team not being forced to play through him. But like it or not, Ronaldo produced goals. With this version of Man U, I can’t see how they can be nine points better this year, especially if Ronaldo is sold.