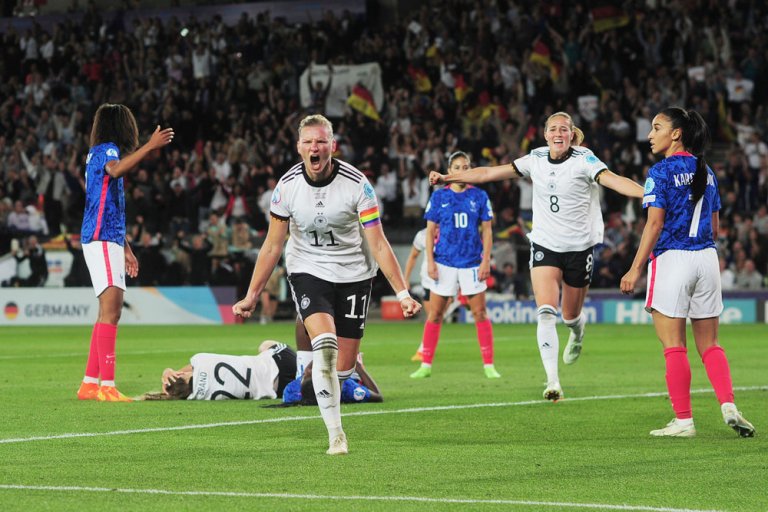 Alexandra Popp of Germany celebrates her goal 2-1 during the UEFA Women’s Euro 2022, semi final football match between Germany and France on July 27, 2022 at Stadium MK in Milton Keynes, England. (Photo by Colorsport/DPPI/Icon Sportswire) ****NO AGENTS—NORTH AND SOUTH AMERICA SALES ONLY****

The Women’s Euro Final kicks off at 12:00 pm EST on Sunday, July 31
England is a +140 favorite over Germany in the final
See the odds and our best bet England vs Germany below

It’s England vs Germany in the Women’s Euro Final on Sunday, July 31 at 12:00 pm EST at Wembley Stadium with the Lionesses listed as short home favorites.

Read on to see the current Women’s Euro Final odds, all the key stats, and trends for both teams, and our England vs Germany picks here.

If you’re new to soccer betting and want to know how to bet on soccer, remember the moneyline odds in the table above, as well as the total and spread markets are for the result at the end of 90 minutes and injury time only.

It’s the final that most fans were hoping for with the home team England hosting the record-champions Germany on Sunday. It will be a rematch of the 2009 final in Finland that saw Germany smash England by a 6-2 scoreline.

That is the only other time England has reached the final outside of the very first Women’s Euro in 1984 which saw them lose in penalties against Sweden.

That’s a stark contrast to the Germans who have won 8/12 Women’s Euros. In 2017 the Netherlands broke a streak of six-straight German wins in the tournament. In fact, Germany has only ever lost three times across their 45 all-time Women’s Euro matches.

This Euro has the potential to change things in Germany – for the first time, women’s football is on the cover of Kicker, the most important football magazine here. Shows once again that even 8 titles don’t necessarily equal much coverage or attention. This time, it’s different https://t.co/3RDh1b0biR

England Dominant on Way to Final

The host nation has stormed their way into the Women’s Euro Final with a convincing 4-0 thrashing of the World’s second-ranked Sweden side. They’re into their third final and will be looking to lift the trophy for the first time.

Sweden were expected to put up a stiffer competition and did start strong in creating some early chances. However, England weathered that storm and against the run of play, it was Beth Mead who opening the scoring for England in the 34′ minute, her sixth goal of the competition.

That 1-0 halftime lead was quickly extended to 2-0 in the 48′ minute by Lucy Bronze. Substitute Alessia Russo extended that lead in the 68′ minute to three with an audacious backheel nutmeg of Swedish keeper Hedvig Lindahl. Fran Kirby added a fourth for England in the 76′.

England has snapped a streak of semifinal disappointments in recent major competitions. They had previously lost in the semis of the 2015 World Cup, 2017 Euros and 2019 World Cup.

The odds in the Women’s Euro Semifinals were an even -112 for either Germany or France to advance to the final. But when Germany reaches a semifinal, there are fewer sure bets out there. With a 2-1 win over France on Wednesday, Germany has now advanced to the finals 9/10 times they’ve played in a semifinal.

The Germans entered the semis as the only team yet to concede a goal in the tournament. And while France came out strong with some early chances, it was Germany who struck first. Alexandra Popp continued her dominance in the tournament by getting on the end of a Svenja Huth cross into the box and scoring her fifth goal of the tournament in the 40′ minute. It made her the first player to score in five Women’s Euro matches.

But Germany would finally concede in the tournament just moments later in the 44′. Right as the half was about to end, France pulled level when Kadidiatou Diani’s shot from just outside the penalty area rattled off the post and deflected off the back of German keeper Merle Frohms who was unfortunately credited with the own goal.

Now into the later stages of the second half, with extra-time beginning to look like a possibility, it was Popp again, scoring her sixth of the tournament, this time a headed goal in the box from another Huth cross that gave Germany the 2-1 lead and eventual win.

Both teams have a player at the top of the Golden Boot race as Mead and Popp have each recorded six goals.

For Popp, her six, have accounted for 46-percent of Germany’s goal output. She is the first player to score in each of the opening five games of a Euro. Her anytime goalscorer odds are +215. Germany has seven goalscorers this tournament, but only Popp and Lina Magull (2) have scored multiple times. Four of Popp’s six goals have come from a header. If your sportbook offers a prop for method of goal, a header could be worth a flyer.

For the first time in Women’s European Championship history, two players have scored 5+ goals at the same tournament:

They both want that Golden Boot. #WEURO2022 pic.twitter.com/4CuUWgk3iv

For the Lionesses, Mead, also with six doesn’t quite account for as much as England’s offense, accounting for 30-percent of their 20 goals scored. However, she has played a part in 11 of those 20 England goals by also assisting on five. England have eight different goalscorers with each of Mead, Russo, Georgia Stanway, Fran Kirby and Ellen White having scored multiple goals.

Russo, despite only playing substitute minutes, is England’s second-leading scorer with four. Odds for Mead or Russo to score anytime in regulation are +250 and +260 respectively. White also has +215 odds to score anytime. She has two goals during the tournament.

Sarina Wiegman has fielded the exact same starting XI for England in each game this tournament. The projected lineups for each team can be seen below.

Both England and Germany had two extra days of rest over their semifinal opponents. In the final, it will be England which will be fresher having played on Tuesday, compared to Germany who played Wednesday.

That means hosting nations are 4-1 when they reach the final.

However, we talked of sure bets with Germany being 9-1 in the semifinals. But there are surer bets and that is Germany in the finals where they are a perfect 8-0. Germany has also owned England historically. England has won just two of the past 12 matches against Germany. Though they beat them earlier this year, it came in a friendly tournament where much of this current German squad did not participate in.

There will be so much quality on the pitch on Sunday and two in-form strikers that I see a goal from each side. England do have the home advantage and have a few more options for goals to come by that I give them the edge to lift the trophy. Meanwhile, with goals in every game so far, a bet on Popp to score seems like a requirement.