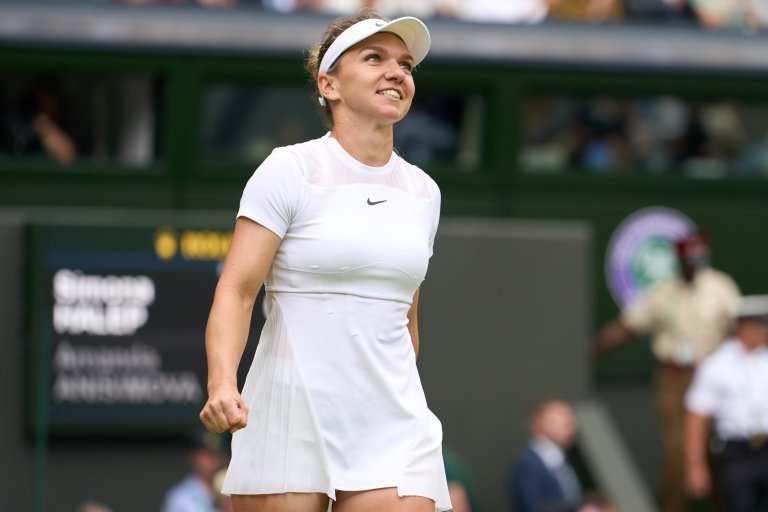 The semifinals of Wimbledon women’s singles will take place on Thursday, July 7th
Elena Rybakina and Simona Halep will go head-to-head
Continue below for odds, preview and best bet prediction

The final four players are set for women’s singles play at Wimbledon. 17th seed Rybakina and 16th seed Halep will go head-to-head for the fourth side on Thursday.

Rybakina is coming off a come from behind win against Aussie Ajla Tomljanovic, and Halep enters this semifinal match after a straight set win over American Amanda Anisimova.

Halep is the favorite heading into this match, and as a former champion, this should come as a surprise. The Romanian’s Wimbledon odds have been slowly shortening since the beginning of the tournament.  But neither player were listed on the top 15 odds to win the tournament.

The 23-year old has had herself quite a couple of weeks here in Wimbledon. Rybakina didn’t lose a set through her first four matches, and found herself comeback and win against her quarterfinal opponent after losing the first set.

Things weren’t looking good after she lost her first set against Tomljanovic. But Ryabkina came out strong in the second set, going up 2-0. For the rest of the match, it was a lot of back and forth between the players, but it was Rybakina that managed to capitalize on her opponents mistakes, while minimizing her own.

On form and into a first ever Grand Slam semi-final – Elena Rybakina ✨#Wimbledon pic.twitter.com/EQOEz6bWwE

She’ll now compete in not only her first Wimbledon semifinal, but her first Grand Slam semifinal.

Halep Continues to Dominate at Wimbledon

Halep returned to Wimbledon for the first time in three years. Last time she was here she went on to win the whole thing. This is the first time she’s able to go out and attempt to defend her title here. In 2020, the tournament was canceled, and last year, she struggled with injury for most of the year.

The 30-year old extended her win streak at the All England Club to 12 matches when she beat Anisimova 6-2, 6-4 on Wednesday.

The belief is BACK ?

This is now Halep’s third semifinal appearance at Wimbledon. As the only Grand Slam champion left, can she live up to the status?

These two players are fairly familiar with each other, having played one another three times before. Their first meeting dates back to 2019, with their most recent happening in the round of 23 of the 2021 US Open.

Halep holds the 2-1 edge, with her one loss against Rybakina happening due to her retiring from the match in the first set.

This is going to be an exciting match to watch. Ryabkina has been fairly strong all tournament, and we’re seeing Halep in her old form. Her form that won her the tournament back in 2019.

Halep will be coming into this match with a bit more of an edge. The former champion knows what it takes to win here, and has had a bit more success than her opponent on grass. She had a stronger semifinal match, and has spent less time on the court the past two weeks than Rybakina.