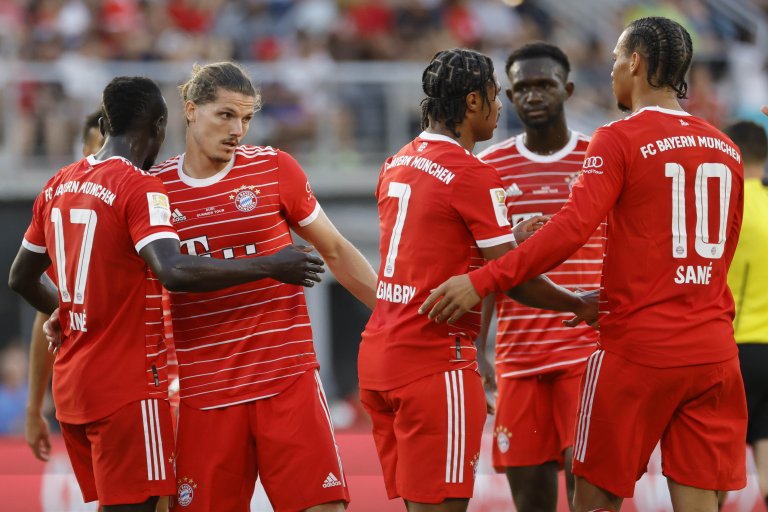 It’s Eintracht Frankfurt vs Bayern Munich in the opening game of the new German season on Friday, August 5 at the Deutsche Bank Park. It all kicks off at 2:30 pm ET.

Bayern starts the season as massive favorites in the Bundesliga odds to win their 11th-straight title, while Frankfurt’s aiming for top four.

We preview Eintracht Frankfurt vs Bayern Munich and offer below some analysis, team news, and picks for this huge Bundesliga clash.

Odds as of August 5 at Barstool Sportsbook.

Munich are also unsurprisingly listed favorites to win the Bundesliga at -500, while Eintracht, even at sixth in the listings, are huge outsiders at +10000 to win the German title.

Barstool have listed over 3.5 goals at -114 and we have to go to over 4.5 goals before we find a plus money bet. The bookies clearly believe Bayern will thrash Eintracht, but this early in the campaign it’s worth considering under 2.5 goals at a tempting +235.

In his first season as Frankfurt head coach, Oliver Glasner brought European glory to the club for only the second time in its history. A thrilling run to the Europa League final, which saw them beat Barcelona and West Ham en route, concluded with a dramatic penalty shoot-out win over Rangers in the final.

Tactics, key duels and everything else you need to know ahead of the @Bundesliga_EN home clash with @FCBayernEN ?⤵️#SGE #SGEFCB

Unsurprisingly, Die Adler’s focus was on their European journey and domestically they suffered. An 11th-place finish in the Bundesliga was not a true reflection of their overall improvement under Glasner. This season they will definitely be aiming for better than mid-table, while also partaking in the Champions League campaign – their prize for winning the Europa League.

Prior to arriving at Deutsche Bank Park, Glasner was with Wolfsburg where he took them to a sensational fourth-place finish in the 2020-21 Bundesliga – something he will hope to emulate at Frankfurt.

Their pre-season has been good – unbeaten in all five games including a 4-0 win over 1. FC Magdeburg – and in addition to retaining last season’s squad they have added Mario Gotze and Lucas Alario. While this is the toughest opener possible, they will come into this game with confidence and will be roared on by an expectant crowd.

For some teams, the departure of one of the world’s leading goalscorers would cast doubt on their season, but not the mighty Bayern. They have brought in Liverpool star Sadio Mane to fill the boots of Barcelona-bound Robert Lewandowski and he started well with a goal in their 5-3 win over RB Leipzig in the German Super Cup.

Julian Nagelsmann, while recognizing that Mane played as a left-sided striker with Liverpool, has signaled his intention to play the Senegalese captain in a more central role.

Plenty of New Faces at the Allianz Arena

Mane isn’t the lone new face at the Allianz Arena though. Other new arrivals include Matthijs de Ligt from Juventus, Mathys Tel from Stade Rennais, and Ryan Gravenberch and Noussair Mazraoui from Ajax.

It may take a few weeks for the new faces to properly settle and to adjust to there being no Lewandowski, but the Bavarians will still be the team to beat. Even before a ball has been kicked, their eleventh consecutive title looks well within their grasp.

Der FCB, typically, starts this game as massive favorites, but that doesn’t do justice to the progress Frankfurt has made under Glasner.

Frankfurt will be pushing for top four this season and in front of a noisy home crowd and with the Bavarians still bedding in some new players, this will be closer than the odds suggest.

For me, there is good value in betting on the draw, especially at a juicy +390.