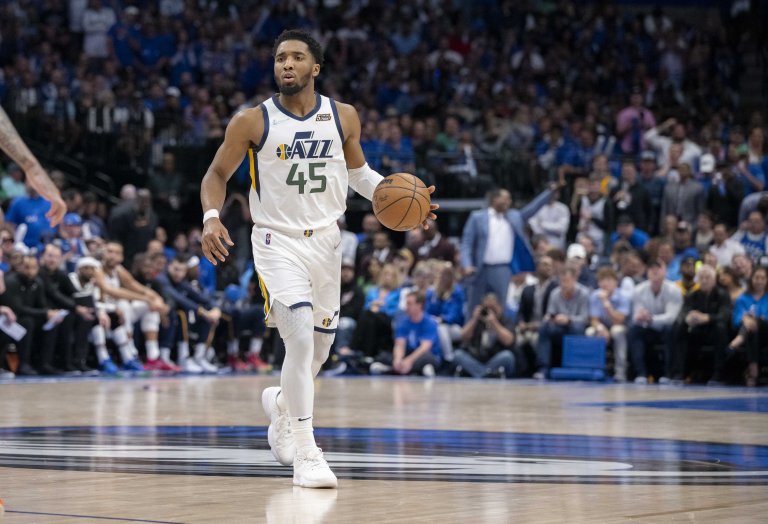 Apr 25, 2022; Dallas, Texas, USA; Utah Jazz guard Donovan Mitchell (45) in action during the game between the Dallas Mavericks and the Utah Jazz in game five of the first round for the 2022 NBA playoffs at American Airlines Center. Mandatory Credit: Jerome Miron-USA TODAY Sports

The current stalemate of NBA inactivity may hit overdrive shortly.

After DeAndre Ayton signed a massive offer sheet from the Indiana Pacers, which is reportedly being matched by the Phoenix Suns, might the puzzle pieces start shaping rosters?

The one we’re discussing today is the suddenly-available Donovan Mitchell. After the Utah Jazz got a king’s ransom for Rudy Gobert, Utah now appears intent on building it up from the studs.

That means the once untouchable 25-year-old is set to net Danny Ainge and company some major assets.

So far, the odds have the  three-time NBA all-star accelerating the developments in Gotham,

Odds as of July 14 at DraftKings Sportsbook. Get this DraftKings promo code before betting on the NBA

Their NBA Championship odds would likely make a dramatic jump adding Mitchell, who’d be under team control for three more years, as part of a 5-year, $163 million pact he signed before the start of last season.

Assuming they can keep young stud RJ Barrett, an RJ-Brunson-Mitchell trio is business, even in the ultra-competitive Eastern Conference.

Mitchell is definitely not Kevin Durant — he’s yet to even be a consideration in the NBA MVP odds — but he does bring top-flight offense and an ability to perform in the playoffs without totally cratering (more on that below).

“I would expect this to be a dance that plays out over the next… 2 weeks – 3 weeks, or the remainder of the offseason”

He’s averaged at least 20 points per game in each of his five seasons, and enjoyed arguably his best all-around campaign yet, putting up  25.9 points on 45% shooting, adding 5.3 assists and 4.2 rebounds in 67 games last season.

Scoring hasn’t been a problem for Spida, but defending has.

In fact, Brunson lit him on fire as the Mavs knocked the Jazz out in five games in Round 1 of this year’s playoffs. Mitchell Robinson and Julius Randle combined aren’t close to Gobert’s level defensively, and even he couldn’t hide Mitchell’s soft D.

Nets, Raptors in The Mix

New York has both the young players and draft picks to land Mitchell, but there’s not much betting value for you here at -200.

A flyer on the Nets at +1000 is intriguing, but there’s literally a chain reaction of moves needed to trigger this action. In a nutshell, both he and Ben Simmons (acquired last season) can’t play on their non-original teams on designated rookie extensions.

Donovan Mitchell would make sense for the Nets if Ben Simmons didn’t have to be dealt. I’m just not sure there is a realistic Kevin Durant trade.

Basically, Brooklyn would need to deal Durant for a monster haul, then move Kyrie Irving, and also flip Simmons, and then use all those remaining assets to trade for Mitchell.  Possible, yes, but a lot of gymnastics involved.

Then there’s the Toronto Raptors, who have been a consistent “insert NBA star here and win chips” squad since the year they won it all with Kawhi Leonard in 2019.

Toronto could absorb the loss of some of that depth and still be title contenders. They’re probably down at +3000 because it’s likely Masai Ujiri is going big-game fishing (Durant), and because he’s not willing to part with reigning Rookie of the Year Scottie Barnes.

Take A Chance on Toronto

I think Mitchell lands in the Big Apple, and there’s no shame in betting the favorite. There’s just better value down the board.

Mitchell does fit better into the Raptors’ timeline, with Siakam and FVV the oldest stars on the team at age 28. And though he’s undersized at 6-foot-1, the Raptors also possess a strong assembly of long, athletic wings that could better protect him on defense.

While Durant is the big fish, he is 34 and 15+ years into a career that has seen him deal with a ruptured Achilles and knee ailments the last few seasons.

Another team worth considering is the Dallas Mavericks. They’ve lost Brunson, but they’ve got enough draft capital and contracts centered around Tim Hardaway Jr or Spencer Dinwiddie to surround Luka Doncic with another dynamic scorer. At +3000, it’s a possibility.