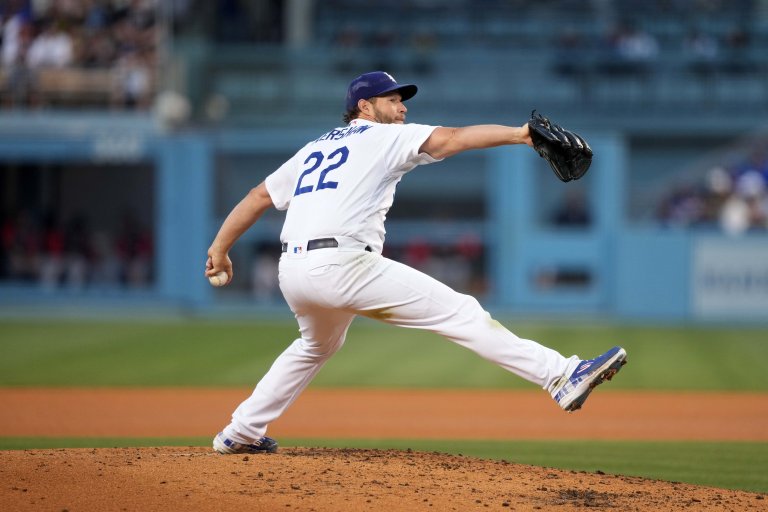 The Los Angeles Dodgers face the Cincinnati Reds on at 12:35 pm ET on Thursday afternoon
This is the series finale of a three-game set
The Dodgers vs Reds odds, preview, and picks can be found below

The Los Angeles Dodgers continue their lengthy road trip on Thursday afternoon as they wrap up a three-game set with the Cincinnati Reds. The first pitch is set to be thrown at 12:35 pm ET at The Great American Ball Park.

The Dodgers will have Clayton Kershaw on the hill here as he battles it out against young Cincinnati righty and former first-overall pick Hunter Greene.

The Dodgers are a heavy -215 favorite for the series finale and have gone 21-13 on the road this season prior to Wednesday’s contest.

Kershaw has made two starts since returning from the IL and he’s looked relatively decent in both. In his most recent outing, the left-hander tossed five innings against the Indians, scattering just five hits and allowing one run while notching four K’s. On the year, Kershaw is impressing as per usual, going 4-1 with a 2.08 ERA in seven appearances. He’s also walked a mere six hitters in 39 innings of work. Kershaw is at a long +5000 in NL CY Young odds thanks to his terrific ERA.

Clayton Kershaw is an athlete pic.twitter.com/eWd30PNwLQ

The Reds are a team that Kershaw is very familiar with. In his career, he’s made 13 starts vs. Cincinnati, posting a stout 2.30 ERA. This is the first time he’s facing them in 2022, though.

Greene isn’t exactly having the best first season in the big leagues. The 22-year-old is 3-7 with a 5.27 ERA in 13 starts. Despite regularly hitting triple digits with his fastball, he’s getting hit around pretty hard and isn’t helping his case by walking 28 batters in 65 frames. Green was chased after just five innings in his last outing, surrendering four earned runs to the Brewers, and also allowing two home runs.

This is going to be the second time in 2022 that Greene faces the Dodgers. He went 5.1 innings in April against LA and gave up two earned runs. His ERA is a tad better at home too, sitting at 4.91.

Dodgers in a Rut

Los Angeles still remains in first place in the NL West with a 41-25 record, but they’ve been struggling as of late. The Dodgers are 5-5 in their last 10 games and dropped two of three to the Guardians at home before heading to Cincinnati.

In fact, LA is hitting only .247 in the month of June with a mere 19 homers. The moral of the story is there’s a lack of run support for the pitching staff right now, who continue to throw the ball well. But, the offense did score eight runs on Tuesday and managed to do some damage again on Wednesday. It’s a step in the right direction.

Reds in the Gutter

There really isn’t much to be happy about if you’re a Reds fan. Cincinnati is in the gutter of the NL Central at 23-44 and just about nothing is going right for them. Heading into Wednesday’s matchup, the Reds lost five in a row and it won’t get any easier as they visit the Giants next.

Their pitching staff owns the worst ERA in the Majors at 5.27 while the bats have lacked consistency all year long. They’ll have another tall task ahead on Thursday against Kershaw.

This is a pretty obvious pick here. Kershaw is pitching very well right now and he always puts his best foot forward versus Cincinnati. Also, as you can see, the Dodgers are killing the Reds across the last two seasons and essentially none of these games are close. Take LA to cover.