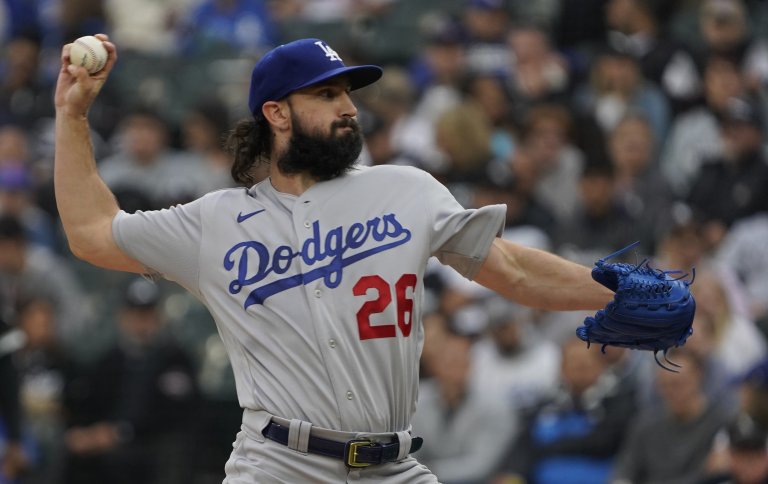 The Dodgers are -195 road favorites over the Reds on Tuesday night
Tony Gonsolin (8-0, 1.42) will start for the Dodgers against Tyler Mahle (2-5, 4.46)
A look at the Dodgers vs Reds odds and matchup can be found below with a pick

The Cincinnati Reds will attempt to end a losing streak when they host the Los Angeles Dodgers at 6:40 p.m. ET Tuesday in the opener of a three-game series at Great American Ball Park.

The gametime is expected to be 92 degrees in Cincinnati with a low of 69, clear skies and wind from west at 5-7 mph.

Gonsolin is having a breakout season, including winning his last four starts while allowing just three runs in 24.1 innings for a 1.11 ERA.

Last Tuesday against the Los Angeles Angels at Dodger Stadium, Gonsolin pitched six scoreless innings and surrendered only one hit. He had six strikeouts and two walks.

The bearded righty is also clairvoyant.

Gonsolin, whose NL Cy Young Award odds are +3500, is 0-0 with a 4.26 ERA against the Reds in two career games (one start). He has pitched once at Great American Ball Park, getting touched for three runs in 2.1 innings last season in a relief appearance.

Mahle is 0-1 in his last six starts despite a 3.08 ERA and coming off a brilliant performance last Tuesday versus the Diamondbacks in Arizona. He worked nine shutout innings, allowing three hits and no walks while striking out 12, though he did not factor in the decision.

Mahle is 2-2 with a 4.21 ERA against the Dodgers in five career starts.

Freddie Freeman belted a home run and Trea Turner extended his hitting streak to 12 games on Sunday, but it couldn’t keep the Dodgers from losing to the Guardians. Closer Craig Kimbrel blew a 3-2 lead in the ninth inning.

Star right fielder Mookie Betts was placed on the injured list by the Dodgers with a fractured right rib. Betts is co-favorite in the NL MVP odds with San Diego Padres third baseman Manny Machado as a +350 choice.

They missed him Sunday.

The Mookie Betts replacement era is off to a shining start. pic.twitter.com/nVrNWkmtDn

Brandon Drury had two hits Sunday in the Reds’ loss to the Brewers.

The Reds put rookie reliever Alexis Diaz on the IL on Sunday with right biceps tendinitis. He has been used in high-leverage situations and recorded two saves in 27 appearances.

The Dodgers swept a four-game series from the Reds in April at Dodger Stadium in the teams’ first meeting of the season. Turner led the way by going 7 for 17 (.412) with a triple and a home run while Will Smith was 4 for 11 (.364) with a double and a homer.

Los Angeles has also won 34 of its last 50 games against Cincinnati since the start of the 2014 season.

Gonsolin and Mahle are both pitching well. However, Mahle’s struggles at GABP make fading him the play in this matchup, even at a high price.