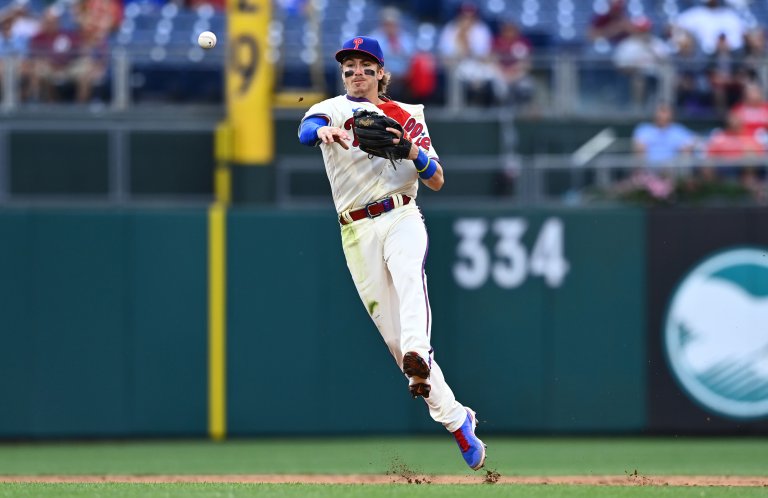 The Phillies are -230 home favorites over the Diamondbacks on Sunday
In a matchup of lefties, Kyle Nelson (1-0, 2.04) will start for Arizona against Ranger Suarez (4-3, 4.42)
A look at the Diamondbacks vs Phillies odds and matchups can be found below with a pick

The red-hot Philadelphia Phillies will look to complete a three-game series sweep of the visiting Arizona Diamondbacks at 1:35 pm ET Sunday at Citizens Bank Park.

The Diamondbacks (28-33/14-17 road) were shut out 4-0 by the Phillies on Saturday for their second loss in a row and sixth in the last eight games. The Phillies (30-29/17-15 home) have a nine-game winning streak since firing manager Joe Girardi and replacing him with bench coach Rob Thomson.

We preview Diamondbacks vs Phillies and offer below some analysis and picks.

Odds as of June 11th at FanDuel

Philadelphia has an implied win probability of 69.7% as a -230 favorite. The Phillies have World Series odds of +5000 and the Diamondbacks are +90000 long shots.

It could be a rainy day in Philadelphia as the weather forecast calls for a 70% chance of precipitation, including a possible thunderstorm. The high temperature is expected to 78 degrees with mostly cloudy skies, wind from the south at 5-10 mph with potential gusts in thunderstorms.

Diamondbacks left-hander Kyle Nelson (1-0, 2.04) will make his first major league start in what will be a bullpen game for Arizona and faces Phillies lefty Ranger Suarez (4-3, 4.42). Suarez will be pitching on four days of rest.

Nelson has made 30 relief appearances in the big leagues during his three-year career. He started only once in 123 minor league games.

Nelson made a brief appearance against the Phillies on Friday night. He retired the only batter he faced on two pitches. It was the first time he had ever pitched against Philadelphia.

He can field his position.

Suarez is 0-2 with a 5.79 ERA in his last four game but pitched well Tuesday in a no-decision against the Brewers in Milwaukee. He gave up two runs on six hits in seven innings with five strikeouts and no walks.

Suarez is 1-2 with a 6.46 ERA against the Diamondbacks in five career games (two starts).

This will be Suarez’s first start in the day this season after taking 11 rotation turns at night, reminiscent of the ‘80s hair band Night Ranger. At home, he has a 1-2 record and 5.26 ERA in six starts.

The Diamondbacks’ Ketel Marte is 4 for 7 against Suarez.

Zack Wheeler struck out eight in six innings as the Phillies blanked the Diamondbacks on Saturday and matched their longest winning streak since 2011.

Rookie Bryson Stott provided the offensive highlight with a two-run home run. Nick Castellanos drove in the Phillies’ other two runs and had two hits along with Rhys Hoskins and Bryce Harper, who has +1100 National League MVP odds.

Phillies closer Corey Knebel felt tightness in his right shoulder while warming up to pitch the ninth inning. He did not enter the game and will be reevaluated Sunday.

Rookie Alek Thomas had two of the Diamondbacks’ six hits.

Diamondbacks catcher Carson Kelly (strained left oblique) was activated from the injured list Saturday after being out since May 5. He hit some balls hard during his rehab assignment at Triple-A Reno.

A ? from Carson Kelly helps us go up 3️⃣ pic.twitter.com/A7bLwWlWWo

While the Phillies have won the first two games this season and five straight dating to last year, the Diamondbacks lead the series 22-13 since 2016.

It’s nearly impossible to bet against the Phillies at the moment, especially facing a struggling team that is planning a bullpen game.