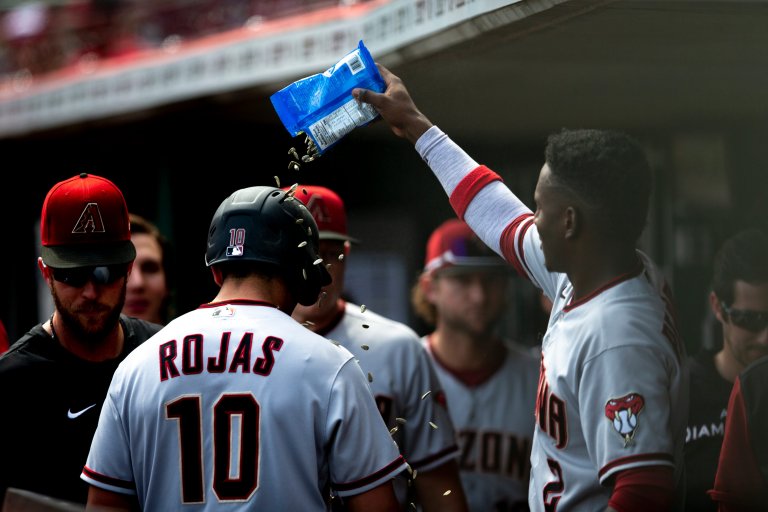 The Philadelphia Phillies are -130 home favorites over the Arizona Diamondbacks in a National League game slated for Friday, June 10
Philadelphia is 7-0 straight up over the past seven games
All of the Diamondbacks vs Phillies odds and best bets are assessed in the following story

The Arizona Diamondbacks (28-31, 13-15 away) are dropping in for a visit with the Philadelphia Phillies (28-29, 15-15 home) at the most inopportune time. It’s not even mid-June, yet the Phils are currently hotter than blacktop in July.

Not only have the Phillies won seven games in a row, they are winning those games in rather impressive fashion. They’re 5-2 against the runline over that stretch. Philadelphia has posted a pair of 10-0 victories during their winning streak.

First pitch for this Friday, June 10 game at Citizens Bank Park is set for 7:05 pm ET. The weather forecast is predicting clouds, 9 mph wind and a temperature of 78 degrees.

Meanwhile, the Diamondbacks are 3-4 SU over the past seven games as they conclude a 10-game road trip with a three-game weekend series at Philly.

It’s the Phillies that are getting the love from oddsmakers. Philadelphia is set as -130 home favorites. Arizona is 18-7 against the runline over the club’s past 25 road games.

It’s Philadelphia carrying the hot hand but in MLB betting trends, it’s the Diamondbacks who are drawing the action. Public betting in both the moneyline and spread splits is backing Arizona at 60%. The public is also supporting the under at a 60% rate. This even though the total has gone over in seven of Philly’s last eight games.

In the NL Division odds are concerned, Philadelphia is +1000 third betting choice to win the NL East. There’s a betting line of +60000 available on Arizona winning the NL West. The World Series odds show the Phillies at +4000 and the Diamondbacks at +80000.

Philly right-hander Kyle Gibson has gone five starts without a win since beating the New York Mets 3-2 on May 8. He’s showing an 0-1 record and 6.46 ERA over that span.

Gibson lasted just 3.1 innings in his last start against the Los Angeles Angels, allowing five earned runs. However, he’s 3-1 with a 3.48 ERA in six home starts this season.

Kyle Gibson’s opponents have hit .188 the first time through the order this season and .356 the second time through.

Diamondbacks right-hander Zac Gallen is coming off his first loss of the season. He was a perfect 4-0 in six May starts with a 3.05 ERA. He’s allowed two earned runs or fewer in all but one of his 10 starts this season.

Gallen is 2-1 with a 2.11 ERA in four road starts. He’s 2-0 in two starts against the Phillies and hasn’t allowed an earned run in 10 innings of work. Gallen has checked the Phils on an 0.90 WHIP, .121 batting average and .540 OPS. That includes a win in his only previous start at Citizens Bank Park.

Phillies batters have enjoyed limited luck against Gallen. Bryce Harper is 1-for-4 (.250). He’s the only Philadelphia batter with a hit off of Gallen.

All good things must come to an end and circumstances appear to be conspiring to bring a halt to the Philadelphia success story of late. Arizona’s Gallen grades out as one of the best pitchers in the NL. He’s also had the Phillies’ number in past meetings.

By contrast, Gibson hasn’t even been able to contribute during Philadelphia’s seven-game win streak. You could play it safe and take Arizona in the runline at +1.5 for -175. By why not go for the gusto and play a straight up Diamondbacks victory?