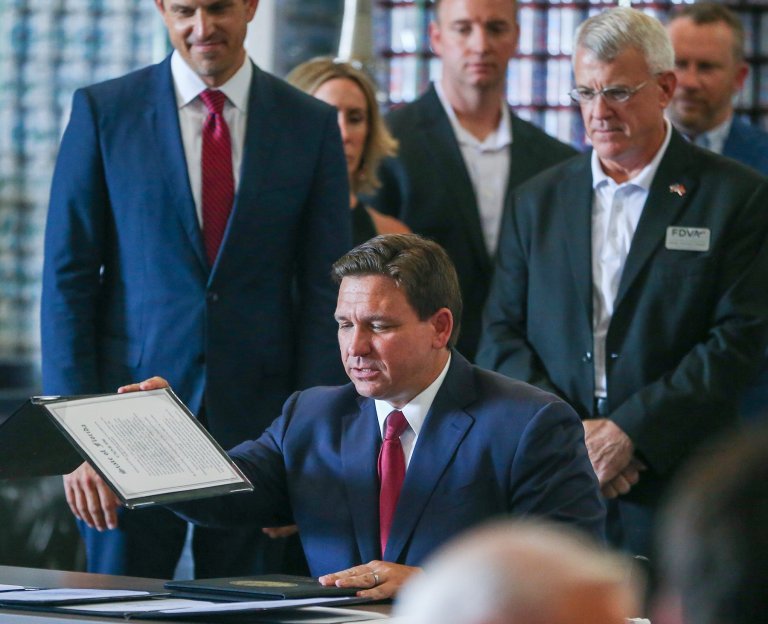 Florida Governor Ron DeSantis picks up one of six bills to be signed during a stop at Props Brewery and Taproom in Fort Walton Beach. Most of the bills were to benefit veterans and their families with help for education and jobs.

Incumbent Republican Ron DeSantis is an overwhelming -1200 favorite to retain his seat as Governor of Florida
Among eight challengers, Democrat Charlie Crist (+800) is the only one with odds shorter than +4000
DeSantis is also currently showing as the favorite to win the 2024 US Presidential election

Four years ago, Ron DeSantis barely eked out a victory in the race to be Governor of Florida. This time around, oddsmakers are anticipating that he’ll be getting to the finish line like Secretariat in the 1973 Belmont.

The Republican incumbent is heavily favored to win a second term in the governor’s chair. DeSantis is the overwhelming -1200 chalk to carry the day when Floridians go to the polls on Nov. 8.

DeSantis is facing eight challengers for the position. However, it doesn’t appear that eight is enough to put a stop to his reign over the state.

Odds from William Hill as of July 8th.

Note that the odds quoted above are from William Hill, a UK and European sportsbook which is permitted to offer political futures. This market is not open to US bettors.

At a betting line of -1200, DeSantis is being given an implied probability of victory that works out to 92.31%. A $10 wager on him would return a payout of just $10.80 should he win the 2022 Florida Gubernatorial election.

It’s entirely possible that DeSantis might not be finishing out his term as Governor of Florida. Online betting sites also have established him as the +300 favorite in the 2024 US Presidential election odds.

DeSantis Well Ahead in Polling

In 2018, DeSantis won a close race with Democrat Andrew Gillum in what political pundits were viewing at the time as an upset. He garnered 49.59% of the votes, compared to 49.19 who cast their ballots for Gillum.

Among more than 8.2 million votes cast, the final margin of victory for DeSantis was fewer that 33,000 votes, or a margin of 0.4%.

This time around, it’s unlikely to be close race to the wire, unless there’s a significant swing in the approval rating of DeSantis. A compilation of polls done recently by Real Clear Politics is showing DeSantis averaging out with a 8.8 percentage point advantage. He’s showing a 50.4-41.6% edge over Democrat Charlie Crist.

Should Nikki Fried win the nomination when Democrats hold their primary on Aug.22, then things look even better for DeSantis. He’s leading her by 128.8 percentage points on a 52.0-39.2% advantage.

If a Republican who doesn’t support Donald Trump is classified as a RINO (Republican in Name Only), then what do they call someone who leaves the Republican party to become a Democrat?

In Florida, they call that Charlie Crist. From 2007-11, Crist was serving as the Republican Governor of Florida. He’s part of five straight Gubernatorial election wins for the Republicans that began with Jeb Bush in 1999.

The day after I’m elected governor, we’ll start gathering signatures for a constitutional amendment to eliminate any doubt that abortions will stay legal in Florida.

We did it with medical marijuana and the minimum wage and we’ll do it again to protect your reproductive freedom.

Since changing teams, Crist is drawing endorsement of several top Democrats. That list includes one of the most powerful Democrats across the country – Speaker of the House Nancy Pelosi. He’s expected to win the nomination from Fried, Crist’s closest challenger, during the Aug. 22 Democratic primary.

Despite his standing as the one to beat in the race for US President, amazingly it’s still uncertain as to whether DeSantis will beat Trump for the 2024 Republican nod. He’s ahead of Trump on the election betting line. However, DeSantis is still trailing the Donald +128 to +183 in the Republican nominee odds.

Clearly, it’s DeSantis who is taking on the sheen as the new star of the conservative movement. Some of the bills he’s passing into law in Florida are viewed as Draconian by liberals. However, they’re currying favor for DeSantis within the extreme right wing of the Republican party.

As of July 1st, it is officially law. pic.twitter.com/nHRcs59OVm

Looking ahead to a potential run for the White House, DeSantis is putting distance between himself and Trump. Checking other state Gubernatorial races, that appears to be sound strategy. Those who’ve opted to board the Trump train are seeing their political hopes and dreams quickly derailed.

Will it be a case of today Florida, tomorrow the Union for DeSantis? The former looks to be a pretty safe call. However, there’s still work to be done before the latter will also be his to own.