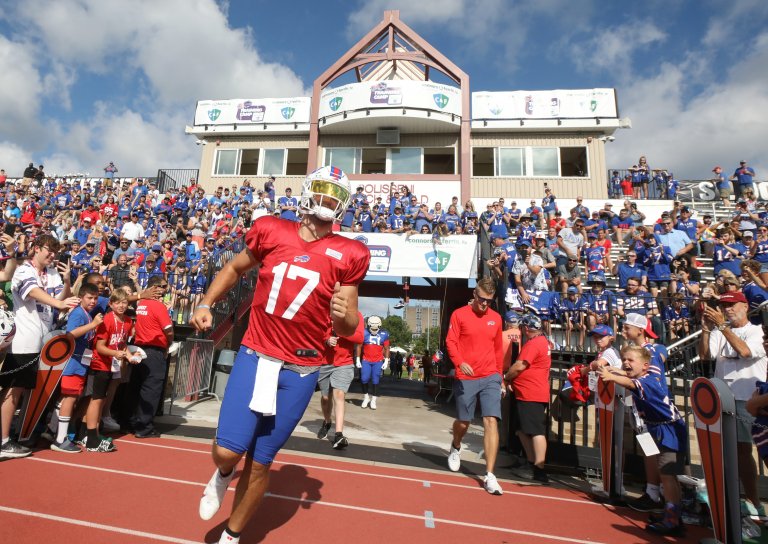 With a packed stands screaming his name, Bills quarterback Josh Allen runs onto the field on the last day of the Buffalo Bills training camp at St John Fisher University in Rochester Thursday, Aug. 11, 2022.

The Denver Broncos will travel to Highmark Stadium in Buffalo for this NFL Preseason Week 2 match-up
Quarterback Russell Wilson’s playing time is still in question, but Josh Allen is expected to play
See the Denver Broncos vs Buffalo Bills odds, who’s in and out, and our betting prediction

Times are changing in Broncos country, as a new front office and coaching staff take over for the 2022 season.

In Buffalo, things remain more or less the same, as the Bills begin another Super Bowl or bust season.

The two teams are set to battle on the gridiron this Saturday, August 20th. The kickoff is set for 1:00 pm in Buffalo, with the game airing on NFL Network.

On Saturday, Eastern New York is expected to experience ideal football weather thanks to an overcast 88-degree day. It’s also the start of the first full season of New York sports betting for Bills bettors.

Odds as of August 18 at BetMGM. Claim this BetMGM promo code to bet on the NFL this weekend

Buffalo is quietly a preseason beast. Heading into Saturday’s game where Buffalo is a 6-point favorite, the Buffalo Bills are a perfect 9-0 against the spread in their last nine preseason games.

Furthermore, the Bills are riding a wave after beating the Indianapolis Colts with a walk-off field goal last week. Finally, a last-second field goal goes in Buffalo’s favor.

On top of that, Denver enters this contest with a rookie coach. New head coach Nathaniel Hackett will bring over a variation of former employer Matt LaFleurs’ West Coast-West wide zone scheme.  He will no doubt be eager to see how the Broncos players react to his unfamiliar systems.

Will the Broncos and Bills Starters Play?

Those hoping to catch a glimpse of star quarterback Russell Wilson may be disappointed.

Indeed, the Broncos will most likely be led by veteran backup Josh Johnson in this contest. Most well known for being the NFL’s quintessential journeyman, Johnson is now taking snaps for his 14th NFL team. The most in NFL history. What’s more, he’s taken snaps in four different leagues (NFL, UFL, XFL, AAF) in his 15-year career and memorably is Marshawn Lynch’s cousin.

Great catch and concentration by the rookie 🔥#Broncos | #DALvsDEN pic.twitter.com/kxni83k2kn

On the other hand, Johnson is no Russell Wilson. The Bills have their own competent back-ups in Case Keenum and USC alum Matt Barkley.

Reports say Bills quarterback Josh Allen will play during Saturday’s game. Head Coach Sean McDermott has stated that “most” of the Bills starters will play. Expect to see the superstar pivot and a few of his main weapons for a series or two.

Injured star cornerback Tre’Davious White remains on IR after suffering an ACL tear on Thanksgiving Day last season. The Bills are hopeful he can suit up for week 1. Star safety Jordan Poyer and wide receiver Marquez Stevenson left practice early on Tuesday and will sit this one out.

On the other side, second-year receiver K.J. Hamler, star free agent signing Randy Gregory,  and cornerback Ronald Darby remain questionable for this contest.

Sean McDermott says “most” starters will play “a healthy amount” in their second preseason game. Josh Allen will play in this game.

Did the Line Move?

With the news dropping on Thursday morning that Bills quarterback Josh Allen is expected to play, the line in this one has shifted drastically. This news, alongside the Bills pre-season winning streak, makes it awfully tough to argue with oddsmakers. Once just two-and-a-half-point favorites, Buffalo now sits as a six-point front runner.

Over and above that, many Broncos starters have picked up small knocks in practice over the past few weeks. A drastic roster turnover will certainly lead to Hackett and company eager to get an extended look at Denver’s depth pieces heading into the season.

Denver deserves praise for beating Dallas last week, however, the Cowboys have historically been one of the league’s worst pre-season teams. Evidently, Mike McCarthy and Kellen Moore are just fine with keeping their offense as vanilla as possible in August.

Incredibly, Denver preseason games have gone under in nine of their past ten games played. While the over is 7-2 in the last nine Bills games.

Something’s gotta give in this one.

In the first week of the NFL preseason, overs dominated. Look for sportsbooks to adjust after their big losses last week and account for the discrepancy of totals across the board.

Ultimately, bettors must ride the hot hand. Buffalo’s offense looked explosive at times last week. With most of their starters set to suit up, look for that to continue.