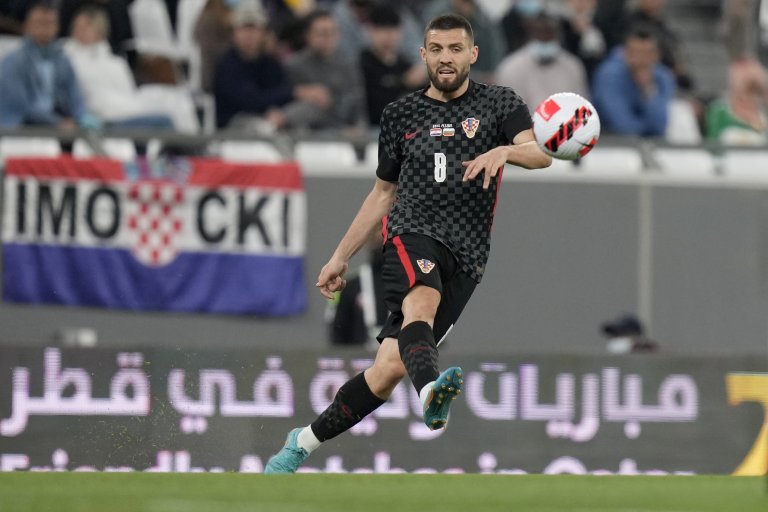 Croatia’s Mateo Kovacic is in action during the international friendly soccer match between Croatia and Bulgaria, at the Education City stadium in Doha, Qatar, Tuesday, March 29, 2022. (AP Photo/Darko Bandic)

Denmark looks to stay undefeated in UEFA Nations League play when they host Croatia on Friday afternoon
The Danes have opened the group stage with consecutive wins, while Croatia looks to flip the script on historical Nations League futility
Read on for all the odds and trends ahead of Friday afternoon’s matchup at Parken Stadium in Copenhagen

Denmark will be aiming to extend their lead atop the UEFA Nations League Group A1 table with a third straight victory in tournament play when they play host to Croatia on Friday afternoon as -115 home favorites. Things have not gone so well for Croatia, who are winless in two tournament clashes to date, and travel to Denmark lagging as +320 underdogs.

Read on for all the odds and trends ahead of Friday afternoon’s Matchday 3 matchup at Parken Stadium.

If you’re new to betting on this sport, then take a look at our How to Bet on Soccer page before betting the odds above which make Denmark the favorites. When it comes to the total on this match, goals are expected to be at a premium. The total is set at 2.5, with the Under listed at -138 odds. Over 2.5 offers a +110 return. Croatia with a +0.5 Asian Handicap has odds of +100.

Winners in nine of their past 11 contests across all competitions, Denmark has been particularly steady on home turf of late. The Red and Whites have outscored opponents by a wide 14-1 margin during a five-match win streak on home turf, capped by a relatively easy 3-0 win in friendly clash with Serbia back in late March.

Imagine showing someone this group back in 2018 while France and Croatia were in a World Cup final, Denmark had gotten knocked out in the Round of 16 and Austria hadn’t even qualified pic.twitter.com/YqD3Q94aDk

The Danes have continued to impress in the early stages of this tournament. The club opened with their first victory in France, a 2-1 win over Les Bleus at Stade de France, and held on for a 2-1 victory over a pesky Austrian squad earlier this week.

Andreas Cornelius emerged as the hero in Paris, potting both markers in the Danes’ victory over France, and has now found the back of the net on five occasions over his past nine overall appearances in both league and international play. The club also received a timely contribution from veteran defender Jens Stryger-Larsen, who sealed the win over Austria with his first goal with the national team in 17 appearances since early last year.

?? Just the 4 goals in qualifying for Joakim Mæhle ??

However, Denmark’s top two goalscorers during World Cup qualifying have yet to make their mark in UEFA Nations League action. Joakim Maehle and Andreas Skov-Olsen combined to score 10 total goals for the Red and Whites during qualifying, but the duo have combined to produce just three total shot attempts so for in the tournament.

Croatia turned in a steady performance at World Cup qualifying, going undefeated in their final nine contests while keeping clean sheets on seven occasions. Those results have helped buoy the Blazers in the 2022 World Cup odds, where they immediately trail Denmark as a +3500 bet.

Austria net 3️⃣ past Croatia and take the W in their UEFA Nations League opener! ?? pic.twitter.com/RfAkqmFRTY

However, Croatia has struggled to carry over that success into this season’s Nations League. Indeed, the Croatians have historically struggled to produce results in this tournament. In the wake of their 0-1-1 start in this season’s group stage action, Croatia now sports a dismal 2-2-8 all-time record in Nations League action, with their last victory in tournament play coming at home against Sweden in October 2020.

Further complicating matters for Croatia is their lack of consistent success against top flight opponents. Currently pegged at No. 16 in the FIFA world rankings, the most notable opponents that Croatia have topped in recent action have been 36th-ranked Russia and 45th-ranked Slovakia, both of whom they narrowly defeated with late goals in qualifying action.

The club has otherwise turned in middling results against elite opponents, escaping with a 1-1 draw against France earlier this week, extending their current run of futility in non-friendly action against opponents currently ranked higher than the since stunning Spain with a 3-2 win in Nations League action almost four years ago.

?️ “We have no choice, we have to do our best. It’s hard for all of us because it’s the end of the season, it’s not easy when they put four games in ten days, they don’t ask us + pic.twitter.com/PJeAdUgNCM

A lack of offensive production has not helped matters. The Red and Whites have scored just one total goal so far in tournament play, and multiple goals just once in their past five outings. Star midfielder Luka Modric has been particularly quiet, failing to score in his past 14 overall league and tournament outings, and has failed to find the back of the net 10 career Nations League appearances.