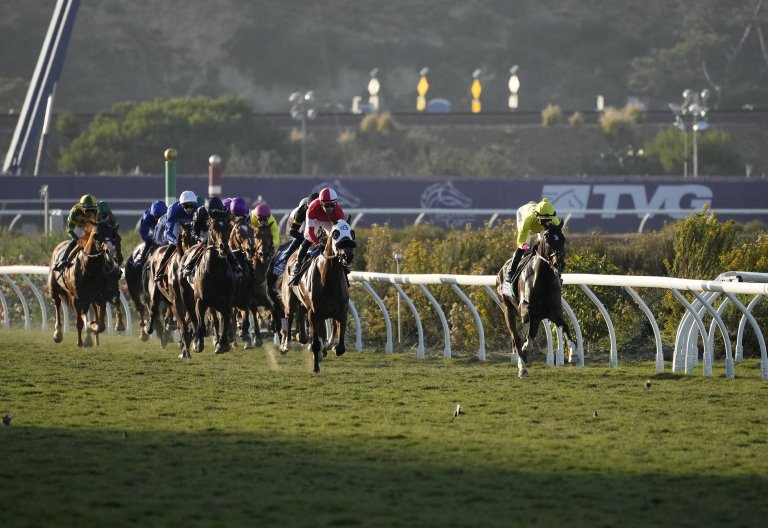 The $300,000 Grade 1 Del Mar Oaks attracted a field of 14 for Saturday’s feature event
Eight of the horses running including favored Spendarella have run in Europe
Where can we find betting value Where the Surf Meets the Turf on Saturday?

For 65 years the Del Mar Oaks has attracted top three-year-old fillies to try their luck on the turf near San Diego. Not only is this year’s field strong, it is deep.

A 14-horse field is terrific for bettors. Money will be spread out and if you strongly prefer one horse, value should be present. Even if Spendarella is your choice, the favorite is bettable at +160.

Let’s look at the field closely, and consider who might be worthy of a wager.

Odds as of August 18

The mile-and-an-eighth Del Mar Oaks won’t get going until 8:30 pm ET Saturday. Temperatures in the mid-70s with very little chance of rain are forecast. TVG will provide television coverage.

Horses who have run longer races on the Del Mar sod, and those who are on the inside may hold an advantage because of the track’s turf shoot. The field breaks from just inside the backstretch as they near the second turn, and take a sharp angle towards the finish line, making a left onto the final straightaway prior to the finish line. Then they do a lap on the normal turf course. All 24 races run at this configuration in 2022 have been won by horses in post positions eight or closer to the rail. Those in the nine post out are a combined 0/36.

Let’s discuss some of the top contenders and consider where we may find betting value.

Spendarella Needs to Be Better to Win Del Mar Oaks

In her first race back in the US after running second against top flght competition at Royal Ascot, Spendarella will break from post 11. She is unbeaten in this country.

Aside from the post position, there are no knocks on Spendarella. She has run four times, won three of them, and against the best Europe has to offer finished second last time out. Sometimes horses coming back to the US after a long trip don’t fire their best races right away.

Half the field ran in last month’s San Clemente Stakes. Bellabel was the favorite, and an easy winner at Del Mar.

Run at one mile, that race did not use the turf shoot. Regardless, Bellabel made a huge late move. She has never run more than a mile, and wasn’t doing amazingly well until coming to the US. Her two starts here have been impressive victories. She’ll break from post number two.

Cairo Memories will fire out from the fifth stall following a fifth place performance at Belmont Park in July. She faced ultra-tough competition that day. She beat several of her rivals today in May at Santa Anita.

Cairo Memories has run just once at Del Mar, going a mile and finishing ninth in the Breeders Cup. Her recent form makes her a factor, near or on the lead in the Oaks.

Gracelund Gray is stepping up in level of competition. In fact, her first six races give no indication she can compete with this group. That said, last time out she ran fast, against several horses she faces again today and did so on the Del Mar turf.

That was the first time in this country we saw Gracelund Gray use early speed, which is a good idea out of the turf shoot. She is second off a layoff and breaks from post eight.

This is a pretty wide-open race. Of the other horses with decent post positions, Island of Love is reasonable. She lost to Bellabel last time, and Cairo Memories two back, but consistently is solid and may get a nice trip just behind the leaders.

If you want to temp fate with horses drawn further outside. Txope is making her North American debut. She won in Germany last time out and has faced some good horses.

Ballet Dancing had a crummy post facing Gracelund Gray last time out and is again marooned in the 12-hole here. She was third to Cairo Memories in May.

Lady T didn’t have the cleanest trip finishing fourth to Bellabel in her turf debut. Post position 13 is tough to overcome, but perhaps not impossible.

Spendarella has the best form, and if you just think she is a lot better, so be it. Because of her post, she’ll need to be. Gracelund Gray is very intriguing, but we’d like to see her prove herself at least once more before being confident. She is a terrific value at +1500 and should be considered however you opt to play the race. Cairo Memories is consistent. She fits against this caliber of competition nicely, and has a big chance breaking from a reasonable portion of the gate.