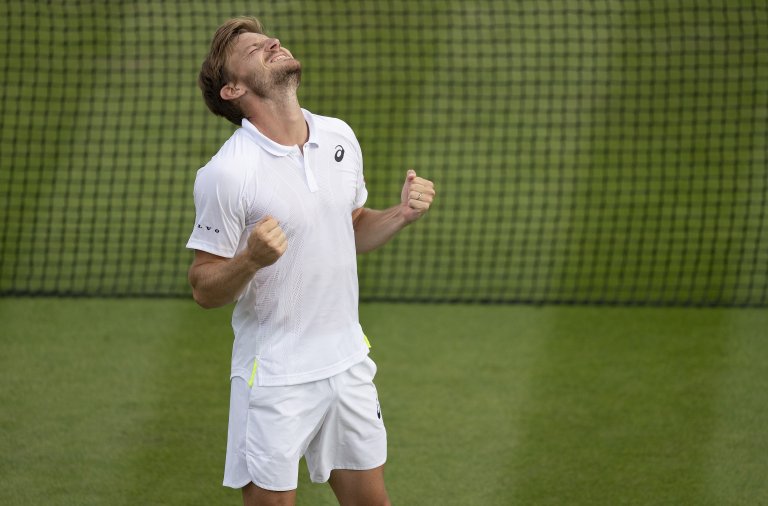 Cameron Norrie and David Goffin are the survivors of the second quarter of the Wimbledon men’s draw
It’s a great opportunity for both to get to their first career major semifinal
Norrie is the slight favorite and will have the home crowd; we break down the Goffin vs Norrie matchup below

The second quarter of the Wimbledon men’s singles draw was always going to be the land of opportunity for someone.

And as the quarterfinals begin July 5, it is No. 9 seed (and home-country favorite) Cameron Norrie and unseeded David Goffin who made the most of it.

Odds as of July 4 at Barstool Sportsbook. Check out the best tennis betting apps and use this Barstool promo code for Wimbledon betting

Casper Ruud has earned his ranking. But to have him as the No. 3 seed in a Grand Slam tournament on grass was always going to be an iffy prospect. And while he got through his first round, he was well beaten in the second by Ugo Humbert of France, far more accomplished on the surface.

As for No. 7 Hubert Hurkacz, he played a shocker of a first-round against Alejandro Davidovich Fokina of Spain.

Hurkacz was the favorite to get through the quarter; Norrie was tied with Ruud, right behind him. Goffin was down the list at +1400.

Still, Norrie and Goffin are still way down the list of Wimbledon odds, in terms of winning the entire tournament.

Even though he’ll be 27 next month, this is only Norrie’s 19th Grand Slam main draw.

And it’s already the first time he’s ever made it to the second week – let alone the quarterfinals, or even beyond.

Goffin, 31, has played exactly twice as many Slams; this is his 38th.

He has made three previous quarterfinals; the most recent was Wimbledon in 2019. Which was the last time he played it. And it is the 11th time he has made the second week of a major.

But he has had to work ever so much harder to get here.

Five-Setter for Goffin vs Tiafoe

Goffin’s four-set win over Humbert in the third round took a fair bit out of him. He was playing a clever grass-courter with silkier skills.

He won because he was far more successful at the net (13-for-16, vs. 15-for-33 for Humbert) and because he kept his unforced errors far lower than Humbert’s 54.

But then he had to play No. 23 seed Frances Tiafoe. And that was a battle even though he came in leading their head-to-head 4-1.

It took him four hours, 36 minutes to get through Tiafoe. He out-aced a big server, kept his first-serve percentage higher and his unforced errors lower than those of his opponent.

In contrast, Norrie had a five-setter early on against Jaume Munar. But he cruised through his last two rounds and will be fresh coming in.

Norrie, a late bloomer who was always eclipsed by players like Andy Murray, Kyle Edmund and Dan Evans, has come into his own and has been the No. 1 Brit on the men’s side for a while.

The No. 1 Court crowd has warmed to him – notably when he displayed rare emotion after that win over Munar.

Very happy for @cam_norrie and in my long time shooting him I’ve never seen such emotion from him, it was worth the wait! @Wimbledon @babolat @ShutterstockNow @CanonUKandIE @iloveellesse #tennisphotography #sportsphotography #norrie pic.twitter.com/ibJGsAcbbd

That he’ll have nearly the entire crowd with him on Tuesday afternoon is a given. And it will help him.

The previous history between the two is too limited to draw much of a conclusion.

Goffin has a good career record versus lefties. But he’s only 5-5 against them over the last year. It is going to come down to energy and fitness and the younger Norrie is quickly becoming known for being absolutely tireless out there.

When you’re a little worn down, and you know this coming in, it will play with your head a little bit.