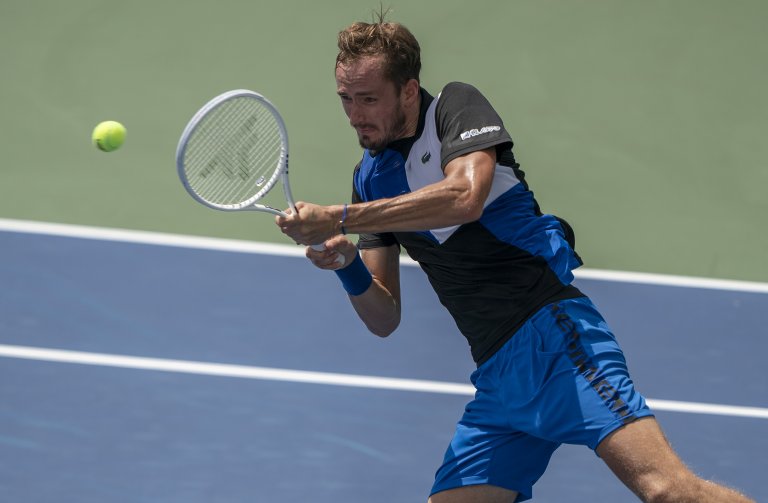 Aug 18, 2022; Cincinnati, OH, USA; Daniil Medvedev (RUS) returns a shot during his match against Denis Shapovalov (CAN) at the Western & Southern Open at the at the Lindner Family Tennis Center. Mandatory Credit: Susan Mullane-USA TODAY Sports

No. 1 Daniil Medvedev takes on No. 13 Taylor Fritz for a spot in the Western & Southern Open semifinals
The match, scheduled for Friday, Aug 19 at 1pm ET, is the first meeting between the two
Medvedev is the favorite; we break down the matchup and make a prediction

So far during this North American summer hard-court swing, the higher-ranked players have been falling with some regularity.

But so far in Cincinnati, there has been some semblance of form. And No. 1 seed Daniil Medvedev is into the final eight, favoured to defeat No. 11 seed Taylor Fritz.

In the round of 16 on Thursday, Medvedev faced unseeded Canadian Denis Shapovalov, who has all the skills in the world but has been struggling mightily over the last many months.

Shapovalov, who pulled off a comeback win against the in-form Tommy Paul the previous day, stayed right with the world No. 1 – until the business end of both sets.

Medvedev ended up winning 7-5, 7-5. But he probably doesn’t feel particularly gratified or energized by that win, which was a struggle.

Fritz’s won-loss record on the season is nearly identical to that of Medvedev. And after reaching his career high just a few weeks ago, he continues with his solid play.

Only the versatile Dan Evans, who beat him on a retirement in Washington, D.C. and in the third round in Montreal, has had his number.

He took care of Nick Kyrgios in short order. And then he dismissed No. 6 seed Andrey Rublev, in not very short order Thursday.

“A lot of things are clicking”: Taylor Fritz moves swiftly past Nick Kyrgios in Cincinnati https://t.co/e2gRQepnsw

The only rally category in which Rublev had the upper hand against Fritz was the one with rallies lasting at least 10 shots. And even then, just barely.

That is not going to be the case against Medvedev on Friday.

As an example, in Medvedev’s opening win over Botic Van de Zandschulp, just over half the points lasted fewer than five shots.

The two, somewhat surprisingly, have never met before.

But Medvedev is a long way from taking Fritz for granted, because he knows how dangerous he can be.

“He’s a Masters champion – he’s an amazing player.” @DaniilMedwed looks ahead to facing @Taylor_Fritz97 in a mouthwatering quarter-final at #CincyTennis pic.twitter.com/BGPYU9gLYD

Will Fritz attempt to gain territorial advantage over Medvedev’s deep return position by trying some serve and volley?

He’s probably seen the scouting. But he’s not overly adept at that.

Fritz needs to control as many points as he can, if he hopes to win. because Medvedev is a much better mover. And if he gets Fritz on the run, he’ll have the edge every time.

At the same time, Fritz has been winning a lot this year. And even against players who are better on paper than he is.

Notably, though, while Fritz sits at No. 19 in return rating on the ATP Tour the last 52 weeks against top 20 players (versus No. 39 overall against all opponents), he’s not even in the top 65 when facing top 10 players.

He’s 12-26 overall vs top-10 players in his career. That said, he’s 6-5 over the last 52 weeks, with wins over Berrettini, Zverev, Rublev (three times), and Nadal, in the Indian Wells final.

Fritz will find a Medvedev who is starting to round into form after the enforced layoff during Wimbledon.

And they’ll be playing in heat and 50% humidity, which ended badly for Fritz in D.C., where he was forced to retire.

Medvedev is likely to outlast him, somehow. But Fritz’s form indicates a battle.