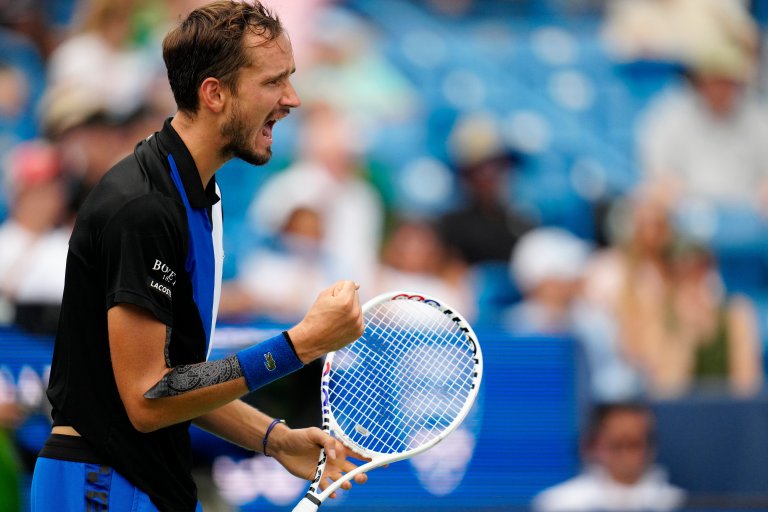 Daniil Medvedev celebrates match point in the second set of the quarterfinal match between Taylor Fritz (USA) and Daniil Medvedev at the Western & Southern Open at the Lindner Family Tennis Center in Mason, Ohio, on Friday, Aug. 19, 2022. Medvedev won the match 7-6, 6-3.

The semifinals of the Western & Southern Open will be played on Saturday, August 20th
Daniil Medvedev and Stefanos Tsitsipas will face each other for the 10th time
Continue below for match odds, head-to-head analysis, and best bet predictions

The stage is set for the first semifinal match for men’s singles play at the Western & Southern Open. First seed and World No. 1 Medvedev will take on familiar opponent, Tsitsipas.

Both players are coming off strong wins over their quarterfinal opponents. Medvedev defeated American Taylor Fitz in straight sets, while it took Tsitsipas three sets to put away John Isner.

Odds as of August 19th at Draftkings Sportsbook. Use this DraftKings Sportsbook promo code to bet on the Western & Southern Open.

This might be the match of the day, as these two will put on an exciting show.

Medvedev on the Hunt for Fifth ATP Masters 1000 Title

The 26-year old had no trouble against Fitz earlier Friday, where he easily defeated the American 7-6(1), 6-3, to earn his spot in the quarterfinals. Medvedev managed 32 winners, and saved three set points in the first set alone.

Fitz was playing in front of a home crowd, and came out strong, but Medvedev was no match for the American when he managed to save a set point at 4-5, and then two again at 5-6.

The Greek star was tested earlier Friday when he went up against American Isner. But Tsitsipas was able to end Isner’s run on his homecourt in just under two and half hours. Tsitsipas won 7-6(5), 5-7, 6-3.

With his quarterfinal win, Tsitsipas improves to 45-15 on the season, leading the tour.

These two came up in tennis at the same time, making them very familiar with one another. Ever since 2018, the two have played each other more than once a year. Their first meeting came back in 2018, where Medvedev won in three, and their most recent encounter happened at the Australian Open, where Medvedev also collected the win.

The Russian holds a 7-2 head-to-head record over the Greek. The last time Tsitsipas won a match against Medvedev was the quarterfinals of the 2021 French Open.

This will be the match of the day. We’re lucky to be getting a final caliber of match in the semifinals. These two men will come out aggressive. They know each other’s style of play, almost as well as they know their own. Neither play will be able to surprise the other, but it’ll ultimately come down to who can minimize the amount of mistakes they make.

Medvedev seems to have Tsitsipas’ number, as he’s managed to win seven of their nine previous matches. But Tsitsipas has managed to sneak a set in a lot of those Medvedev wins. Given how the Greek is playing this week, it seems like it could be another instance where he steals a set. It just doesn’t look like he could take the whole match from Medvedev.