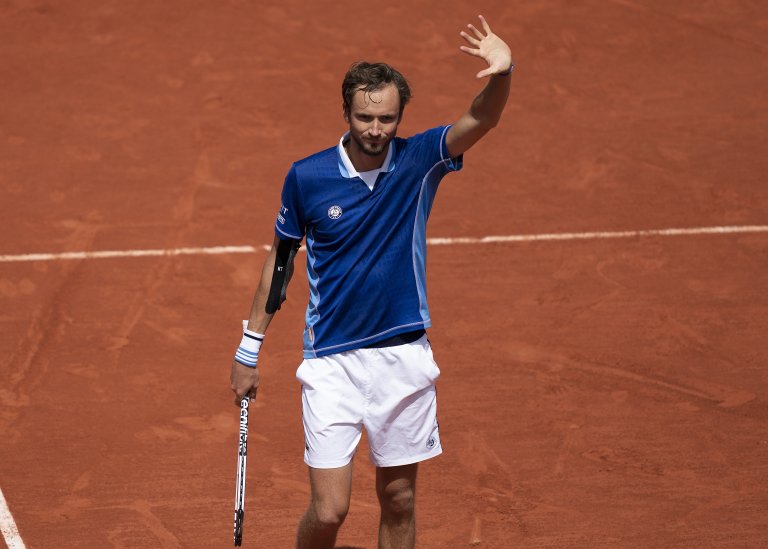 World #1 Daniil Medvedev is an overwhelming -667 favorite to defeat Oscar Otte in their ATP Halle Open semifinal match on Saturday, June 18
Otte upset #8 seed Karen Khachanov in the quarterfinals
All of the Medvedev vs Otte odds, picks, best bets and predictions are analyzed in the story that follows

This is old hat for Daniil Medvedev but it’s another chance to post a career-altering victory for Oscar Otte.

World #1 and top seed Medvedev is through to the semifinals of the ATP Halle Open, where he’ll face the unseeded Otte. Medvedev will be seeking his 25th appearance in an ATP final. On the other hand, Otte still hasn’t advanced beyond the semifinal stage.

It’s Medvedev that oddsmakers are backing heavily to win this match and move to the final. The Russian player is an overwhelming -667 favorite in the tennis betting lines.

Odds as of June 17th at BetMGM Sportsbook. Get this BetMGM promo code to bet on this weekend’s matches

The match is set to get underway at 8:30 am ET on Saturday, June 17. Viewing is available on the Tennis Channel.

In the Halle Open betting trends, Medvedev was set as the +250 favorite to win in the tournament’s opening betting lines. Otte opened at +3300 to be the winner in the Halle Open.

Medvedev Is a Grass Master

Supposedly, grass is supposed to be a weaker part of Medvedev’s game. However, the world’s #1 player’s stats and performance on the surface beg to differ.

Whoever wins Wimbledon will have to accept the fact that their biggest competition wasn’t allowed to play.

Daniil Medvedev continues to show why he would have been a top contender for the title, rolling past Roberto Bautista Agut, 6-2, 6-4 to reach the semifinals in Halle. pic.twitter.com/XU1HHBLKhD

In the Halle Open, Medvedev hasn’t dropped a set through three rounds. He’s only lost 20 games. Medvedev overcame #7 seed Roberto Bautista Agut of Spain 6-2, 6-4 in his quarterfinal match. It took just one hour and 27 minutes to complete the victory.

He saved all nine break points forced by Bautista Agut. Through the tournament, Medvedev has staved off all 17 service breaks he’s encountered.

Will it be third-time lucky for Otte? The German player has taken full advantage of the benefits that home courts offer. He’s through to the semifinals of of his third straight tournament in Germany.

Otte reached the semifinals on the clay at Munich and the grass courts of Stuttgart but he didn’t advance to the final on either occasion. He’s never played in an ATP Tour tournament final since turning pro in 2011. This will be Otte’s first appearance in the semifinals of an ATP 500 event.

Unseeded in the Halle Open and #51 in the ATP world rankings, Otte dispatched #8 seed Karen Khachanov in the quarterfinals, though he required three sets to do so.

This match will be the first meeting between these two players. Medvedev managed to win just seven of 21 second-service points against Bautista Agut. Could this be an area in Medvedev’s games that the German player can exploit?

The highest player in ATP rankings who hasn’t won a title yet in 2022 is world no. 1 Daniil Medvedev. pic.twitter.com/6bRlt8Wuwv

Medvedev most certainly will look to take advantage of Otte’s relatively ordinary service game. He’s only delivered 162 aces this year, compared to 277 for Medvedev. And the Russian player is among the best return players in the game today.

That factor, combined with the absolute consistency of Medvedev’s game, will make on court like difficult for Otte. The Russian will utilize his deeper shotmaking ability to keep the German on the back foot and control the flow of play.

He’s #36 in the ATP Live Ranking, so he almost certainly will be seeded at Wimbledon! pic.twitter.com/7k6zSNlbcw

It only took Medvedev 18 games to send Bautista Agut, the world’s #20-ranked player, packing. That being the case, it’s difficult to imagine any result other than a straight-set Medvedev victory. And it’s hard to imagine it will take as many games as he needed to overcome Bautista Agut.