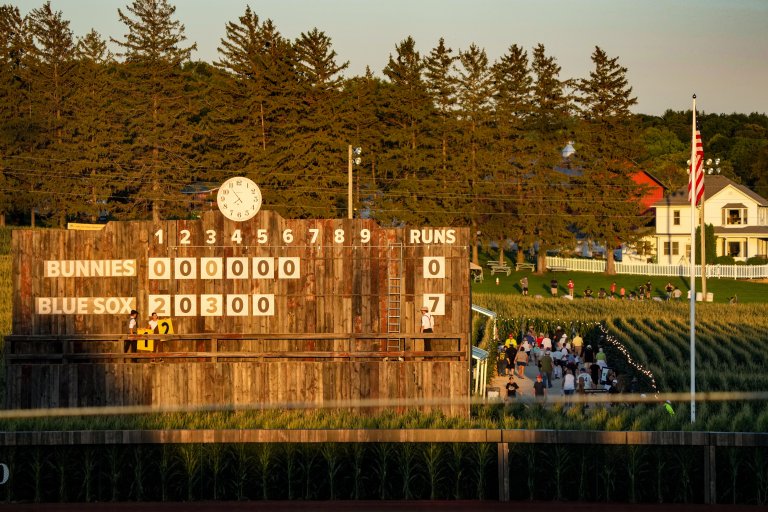 Scoreboard operators watch as the Cedar Rapids Kernels take on the Quad Cities River Bandits during a minor league game at the Field of Dreams in Dyersville, Tuesday, Aug. 9, 2022.

The Cubs and Reds are both -108 on the moneyline for the Field of Dreams Game on Thursday night in Dyersville, Iowa.
Drew Smyly (4-6, 3.97) will start for Chicago against fellow lefty Nick Lodolo (3-3, 4.40)
A look at the Cubs vs Reds odds can be found below with a pick

Build it, Ray, and two of the worse teams in baseball will come to eastern Iowa as the Chicago Cubs and Cincinnati Reds meet at 7:15 p.m. ET Thursday in the Field of Dreams Game in rural Dyersville.

The Cubs (45-65) beat the visiting Washington Nationals 4-1 on Wednesday for their fourth win in the last six games. The Reds (44-66) come in on a three-game losing streak after getting drubbed by the Mets 10-2 in New York.

This is the opener of a three-game series that will resume Saturday in Cincinnati.

Odds as of August 10th at FanDuel Sportsbook.

With both teams at -108 on the moneyline, they have 51.92% implied win probabilities. This is as close to a Fall Classic atmosphere as either team will get with both teams listed at +200000 in the World Series odds.

It should be a pleasant evening in Dyersville with partly cloudy skies forecast along with a gametime temperature of 78 degrees, a low of 57 and east wind at 5 mph.

Smyly has gone 2-1 with a 3.24 ERA in his last three starts and pitched 6.2 scoreless innings to beat the Miami Marlins last Saturday at home. The Marlins got five hits off Smyly, who had four strikeouts and one walk.

In six career games (five starts) against the Reds, Smyly is unbeaten with a 4-0 record and 3.41 ERA.

Last Saturday, Lodolo had a no-decision against the Brewers in Milwaukee. He went 4.2 innings and allowed four hits, three runs and four walks while striking out four.

Lodolo, whose National League Rookie of the Year odds are +13000, will be facing the Cubs for the first time in his nascent career.

Neither starter has ever pitched in a cornfield.

Nico Hoerner homered during a four-run seventh inning as the Cubs overcame a 2-0 deficit to beat the Nationals on Wednesday. He and Nick Madrigal each had two hits for the Cubs.

Votto was a bright spot for the Reds as they were routed by the Mets. He had two hits, including an RBI double, and scored on Jake Fraley’s sacrifice fly.

Farmer also had two hits for the Reds and would seemingly the perfect player to shine in a cornfield.

The Cubs lead the season series 4-3 as Willson Contreras has gone 8 for 16 (.500) with three doubles and two homers. Farmer is also 8 for 16 with two longballs.

Last year’s inaugural Field of Dreams Game was a classic with Tim Anderson hitting a two-run home run in the bottom of the ninth inning to give the Chicago White Sox a 9-8 victory over the New York Yankees.

The White Sox and Yankees both wound up in the playoffs. This matchup isn’t nearly as attractive.

The Reds make a rare appearance on a national stage and get to show off one of the key pieces of their rebuild in Lodolo. The lefty continues to show marked improvement and looks like a good value play in this spot.