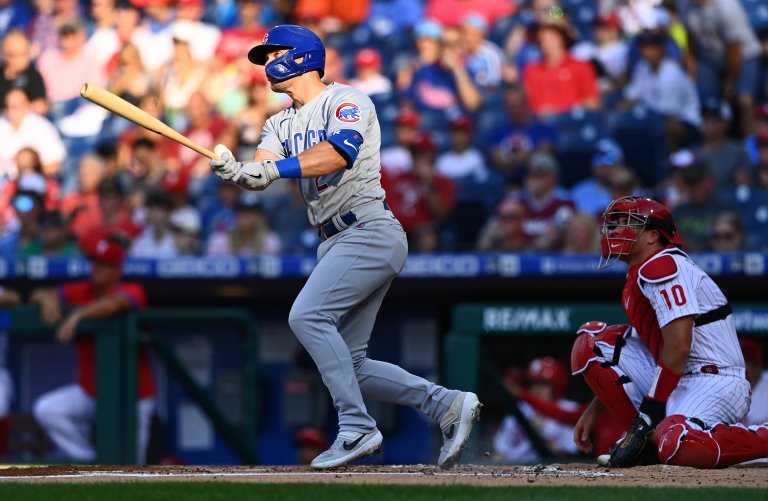 The Philadelphia Phillies are -140 home favorites over the Chicago Cubs in an National League afternoon game set for Sunday, July 24
Chicago is 2-5 straight up in the last seven games at Philadelphia
See the Cubs vs Phillies odds ahead of Sunday’s series finale

A 6-2 victory by the Cubs defied the usual Chicago-Philadelphia motif, which is runs, runs and more runs. The Cubs beat the Phillies 15-2 on Friday. In their final meeting of the 2021 National League season, Philadelphia outscored Chicago 17-8.

The total for this game is set at 10. In eight of the past 11 games between these two teams, they’ve exceeded that number.

Oddsmakers are setting the Phillies as -140 home favorites in the money line. Philadelphia is 21-19 straight up as a home favorite this season.

First pitch at Citizens Bank Park is set for 12:05pm ET on Sunday, July 24. Cloudy skies are in the forecast, with 11 mph wind and a temperature of 98 degrees.

At odds of -140, the Phillies are offering an implied probability of victory of 58.33% in the MLB betting line. A successful $10 wager on Philadelphia would deliver a payout of $17.10.

Public wagering is showing to be in line with the oddsmakers on this game, backing Philadelphia. The Phillies are pulling 57% of the moneyline and runline action. There’s also 57% of bets supporting the over.

The MLB betting trends show that in the NL Division odds, Philadelphia is +1000 to win the NL East, with Chicago a longshot in the Central. The MLB pennant odds show the Phillies at +1800 to win the NL flag, while they’re at +3500 to win it all in the World Series odds. You’ll get a betting line of +200000 on the Cubs winning the Fall Classic.

It’s been a rough go for Cubs left-hander Drew Smyly since he returned from the IL (oblique strain) on July 10. He was scuffed up for five hits and four earned runs in two innings pitched by the Los Angeles Dodgers on his return to the mound. Smyly was somewhat better on July 16 when facing the New York Mets.  He was touched for five hits and two runs, one earned, over 4.1 innings of work.

The southpaw rates among the top 4% among MLB hurlers in exit velocity (85.4). Smyly has made it through the fifth inning in just four of his 11 starts this season. He’s surrendered three or more earned runs in six of his last nine starts.

Smyly has never recorded a decision in four appearances facing the Phillies, including three starts. He shows a 4.40 ERA in those games.

Phillies left-hander Bailey Falter is living up – or would that be down – to his name. He’ll be making his sixth start of the season and is still seeking that elusive first victory. Falter has gone five innings once in six starts. He’s showing a 5.36 ERA over his past five starts.

Bailey Falter will be promoted back to start for #Phillies on Sunday. The club will throw Suarez, Nola, Gibson in that order vs ATL next week. pic.twitter.com/UhzbLGt0nC

Chicago’s Patrick Wisdom and Ian Happ are both 1-for-1 (1.000) against Falter. Happ has driven in a run.

You dance with who you brung and you stick with what works. The over was a winning play between these two teams on Friday.

Considering the numbers being posted by these two starting pitchers, even at a total of 10, the over looks to be a bargain.