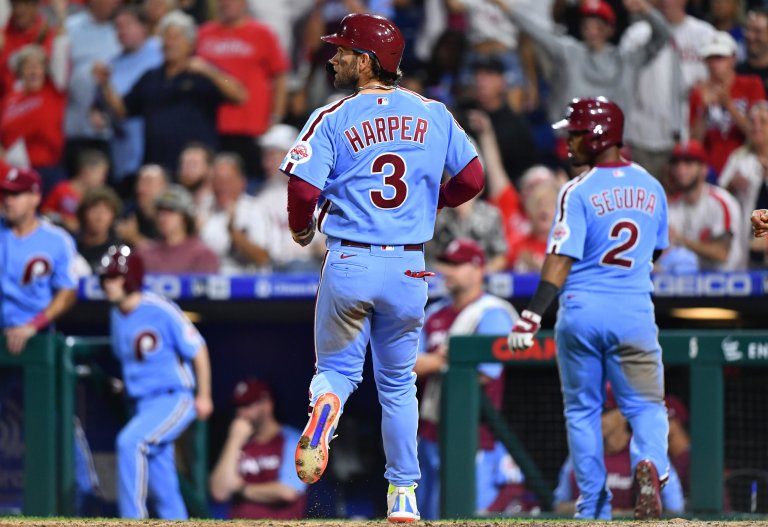 The Philadelphia Phillies are -130 home favorites over the Chicago Cubs in a National League game set for Friday, July 22
Philadelphia is 5-1 straight up and against the runline in the past six home games against Chicago
Overall, the Phillies are 9-2 SU in the past 11 meetings with the Cubs

Longtime division rivals when the National League was a two-division outfit, the Philadelphia Phillies (49-43, 24-21 home) play host to the Chicago Cubs (35-57, 17-25 away) in the first regular-season meeting of 2022 between these two ball clubs that have been clashing annually since 1901.

Oddsmakers aren’t anticipating any changes in this MLB betting trend. It’s the Phillies who are set as -130 home favorites as this rivalry is renewed on Friday. Philadelphia is 21-18 SU as a home favorite this season.

First pitch at Citizens Bank Park is set for 7:05pm ET on Friday, July 22. Clear skies are in the forecast, with 10 mph wind and a temperature of 94 degrees.

At odds of -130, the Phillies are offering an implied probability of victory of 56.52% in the MLB betting line. A successful $10 wager on Philadelphia would deliver a payout of $17.70.

Public wagering is showing to be in line with the oddsmakers on this game, slightly leaning toward Philadelphia. The Phillies are drawing 56% of the moneyline and runline action. There’s also 56% of bets backing the over.

Cubs left-hander Justin Steele is winless in July (0-1) after going unbeaten (2-0) in June. Since the beginning of June, Steele has held the opposition to one earned run in four of his past seven starts. He’s worked at least five innings in eight consecutive starts.

Justin Steele is one of the best contact managers among all starting pitchers in MLB (min. 80 IP).

However, Steele’s struggles on the road are continuing. He’s 0-2 in six starts away from Wrigley Field with a 5.86 ERA. His road WHIP is 1.52.

This will be the first time in his career that Steele is facing the Phillies.

A career .500 pitcher (84-86), Phillies right-hander Kyle Gibson is 9-9 since coming to Philadelphia last season from the Texas Rangers. His current strikeouts/walks ratio of 3.08 would be a career high if Gibson maintains that pace through the end of the season.

Kyle Gibson and the #Phillies take on the Cubs tomorrow. Here is the current Cubs roster against Kyle.

He’s faced the Cubs twice and is 0-2 with a 5.40 ERA. However, Gibson’s strikeouts/walks ratio of 4.33 against Chicago is his best number against any MLB team.

Phillies outfielder Nick Castellanos is 4-for-8 (.500) with a solo homer when facing Steele.

Perhaps the best bet to play on this game is to take the over on the total.  The Cubs and Phillies have combined to go over nine runs in seven of their last nine meetings.

The over is 4-0-1 against the total of nine in the past five Cubs-Phillies games played at Philadelphia.