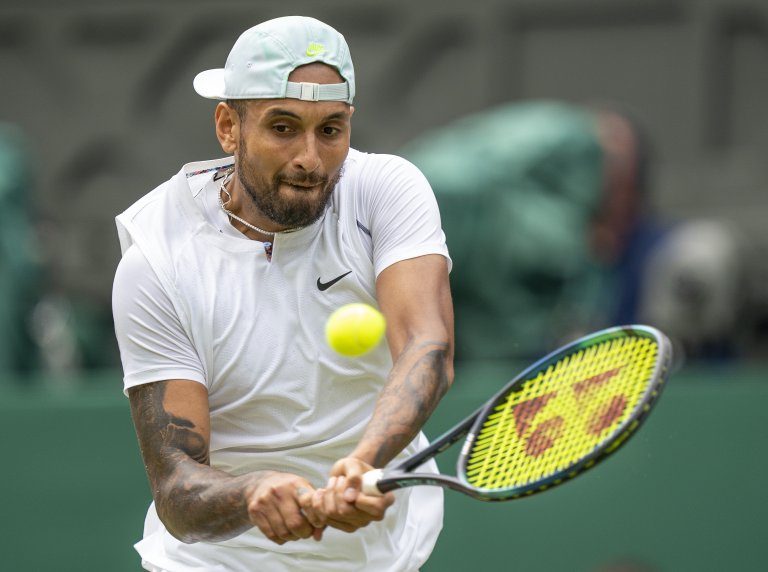 With Cristian Garin and Nick Kyrgios both unseeded, there will be an upstart in the Wimbledon semis
It’s the first meeting between the two, and a huge occasion for both
Read on as we outline all of Kyrgios’s challenges, and make a prediction for Cristian Garin vs Nick Kyrgios

Nothing about Nick Kyrgios is ever simple. But this Wimbledon, as well as he’s playing and fighting, has been particularly complex for the 27-year-old Aussie. In sharp contrast is the 26-year-old Chilean, Garin, who wasn’t expected to do much on grass against good players. Let alone have a shot at the final four, which is exactly what is on the table in this Cristian Garin vs Nick Kyrgios matchup.

Odds as of July 5 at Barstool Sportsbook. Get this Barstool promo code before betting on Wimbledon

While Kyrgios was at least a long shot before the tournament began, Garin wasn’t even on the radar.

But the Aussie is flying up the charts; at this point, only Novak Djokovic and Rafael Nadal are bigger favorites in the Wimbledon odds to win the title.

And this Wimbledon has been no exception.

But the latest bombshell to hit Team K came Tuesday, the day before this quarterfinal match.

Word from his hometown of Canberra, Australia is that his former girlfriend, Chiara Passari, has deposited a complaint for assault dating back to last December.

Despite the headlines, he hasn’t been charged with anything yet. But he (or a representative) is due in court back home on August 2 where the decision will be made whether he’ll be charged.

That’s when Kyrgios is supposed to be playing an ATP 500 event in Washington, DC.

Quietest Run to the Quarters Ever for Garin

Garin, best known for his results on clay, has had his own internal battles.

After the South American clay swing last February, he skipped Indian Wells and questioned whether he would quit the game. His mental health was not in a good place, at all.

But he doesn’t have any issues with Kyrgios, whom he said is great for the game.

Garin is almost as low-key as Brandon Nakashima was in Kyrgios’s round of 16 match. Which meant the Aussie had to create all the drama himself, with nothing to fuel him.

Nick Kyrgios – the motivation: “I never forget things that people say, whether it was three, four years ago. I have a massive chip on my shoulder. I sit here in the quarter-finals at Wimbledon again, and just know there’s so many people that are so upset” #Wimbledon #Kyrgios

Kyrgios appeared to be struggling with a shoulder injury at times during the five-set win over Nakashima.

So that’s just another question about him, going into Wednesday’s match.

This will be his fifth match in the tournament. Two have gone five sets. And the one that went four sets against Stefanos Tsitsipas was probably even more exhausting physically and mentally.

Kyrgios’s body is not built for deep runs and long matches. It’s amazing it’s held up this long, to be honest.

First Meeting for Garin and Kyrgios

Garin caught a massive break right from the start of the tournament when, instead of facing 2021 finalist Matteo Berrettini in the first round, he got lucky loser Elias Ymer instead after Berrettini came down with COVID.

Winning that one was fair game. But Garin’s comeback from being two sets to none down Monday against Alex de Minaur might have been the most impressive match of his career.

Until Djokovic came back from an 0-2 sets deficit to beat Jannik Sinner Tuesday, Garin was the only other player to do it in the entire tournament.

Garin made the third round a year ago. But he beat two qualifiers and fellow clay-courter Pedro Martinez.

What that said is that he has enough skills to beat lesser players. But the win over De Minaur, in particular, showed that he’s capable of more.

These two have never met in the pros. They played once in the juniors, in the major tuneup for the 2013 Australian Open. Kyrgios, a year older, won in straight sets. Kyrgios won that tournament – and then the big event in Melbourne the following week.

This match is all on Kyrgios’s racquet, though – and his shoulders. Or his right shoulder, more specifically. After his epic win, Garin wouldn’t exactly be all that fresh himself.

If Kyrgios loses, it will be because he has beaten himself. But assuming his shoulder recovery was effective, you wouldn’t expect him to have a black hole in this one that lasts more than a set at most.

But a caveat: this is a really tricky one to call.

Get this BetRivers bonus for Wimbledon at one of the best tennis betting apps. Bet $25 on any match and get a $10 live free bet!