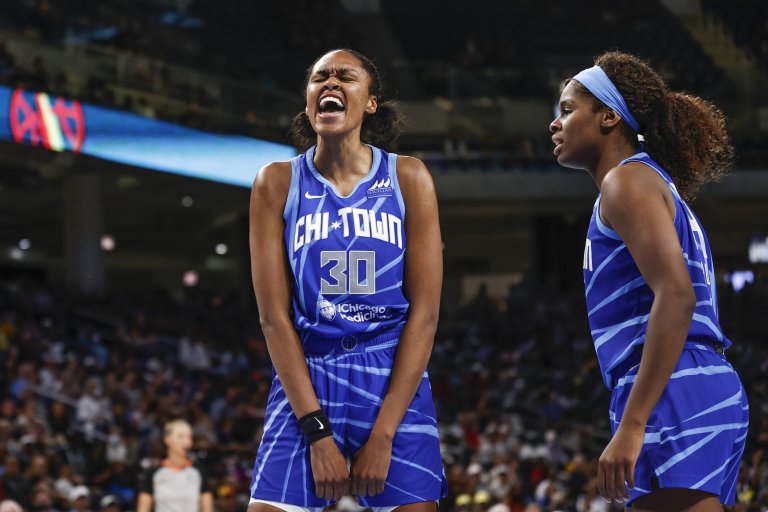 The Chicago Sky are 2.5-point home favorites over the Connecticut Sun in a WNBA game scheduled for Sunday, August 7
Chicago is 3-0 against Connecticut this season; the Sun are 10-4 straight up in their last 14
See the Sun vs Sky odds ahead of Sunday’s tilt

Chicago is 3-3 over the past six games. However, one of those three wins was a 95-92 overtime decision at Connecticut. The Sky are 3-0 straight up against the Sun this season. In fact, against the second-place Sun and third-place Washington Mystics, Eastern Conference-leading Chicago is a combined 6-1 straight up.

Odds as of August 6 at FanDuel

The Sky will be looking to complete a perfect slate against the Sun on Sunday and Illinois Sportsbooks are liking their chances. Chicago is a 2.5-point home favorite over Connecticut. The Sun are 10-4 over the past 14 games but two of those four setbacks were handed them by the Sky.

Tip-off for this game is set for 1:00 pm ET on Sunday, August 7 at Wintrust Arena. The game is available for viewing on ESPN in the USA and Sportsnet in Canada.

At a moneyline of  -154, the Sky are given an implied probability of victory of 60.63%. Bet $10 on Chicago to cover the spread and if the Sky does indeed come through with the victory by more than five points, that will provide a payout of $16.50.

In future book betting, Chicago is the chalk in the WNBA championship odds. The Sky, reigning WNBA title holders, are given odds of +190  to repeat as champions. The Sun are the third choice in this betting market at +500.

A victory by Chicago on Sunday will be creating franchise history. Friday’s 93-83 home-court verdict over the Mystics was Chicago’s 24th of the season. That ties the club mark for wins in a single-season, previously achieved by the 2013 squad.

Chicago is maintaining a two-game lead over the Las Vegas Aces for the top seed in the WNBA playoffs. The Sky and the Aces are scheduled to clash on Thursday.

These plays were all consecutive. The Mystics, a 20-12 team, couldn’t get a shot off for over two minutes against the Sky. They even called two timeouts during this stretch! pic.twitter.com/w2utnVbnkx

Kayleah Copper continues to pace the Chicago attack. She poured in a team-high 19 points in Friday’s triumph. That’s the third successive game in which she was top scorer for the Sky. Copper scored 27 points in the recent win over Connecticut.

The win over the Mystics, though, was all about balance in offense. Allie Quigley added 18 points, Rebekah Gardner and Azura Stevens added 11 points apiece, Emma Meesseman and Courtney Vandersloot each scored 10 points, and Candace Parker contributed nine points. Stevens also pulled down six rebounds and made five blocks.

Sun Heats Up Against Mercury

Since the loss to Chicago, Connecticut handed out consecutive home-court hidings to the Phoenix Mercury. There was a 87-63 win on Tuesday, followed by a 77-64 victory on Thursday.

Natisha Hiedeman led the way in Tuesday’s win with 16 points. In the Thursday triumph, San Jose couldn’t keep up with the Joneses. Jonquel Jones paced the Suns with 14 points and 10 rebounds, while Brionna Jones netted 13 points and grabbed nine boards. Alyssa Thomas recorded a triple-double, scoring 10 points, grabbing 10 rebounds and dishing out 12 assists.

In the OT loss to Chicago on July 31, Courtney Williams missed a potential game-winning jump shot with 3.7 seconds left in regulation time. The Sun scored 26 points off of the Sky’s 20 turnovers and outscored the Sky 21-4 in second-chance points.

Connecticut is 6-1 straight up over the past seven games. The only loss was to Chicago.  The Sun have won four straight road games since suffering successive losses to the Sky and the Dallas Wings.

Connecticut still has a realistic shot at a top-2 seeding. There are games against Chicago and Las Vegas both still left on the slate for the Sun over the remaining four game of regular-season play.

Chicago is getting a test of mettle over the final five games of the regular-season. They’ve already beaten the #5 Mystics. The Sky still play the #3 Sun, #4 Seattle Storm, and #2 Aces.

So far this season. Chicago is 8-3 straight up against those four squads.