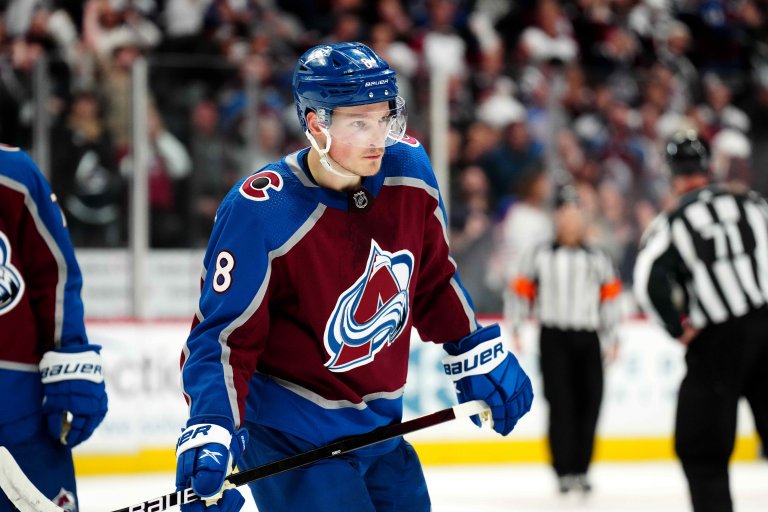 May 31, 2022; Denver, Colorado, USA; Colorado Avalanche defenseman Cale Makar (8) following his goal in the first period against the Edmonton Oilers in game one of the Western Conference Final of the 2022 Stanley Cup Playoffs at Ball Arena. Mandatory Credit: Ron Chenoy-USA TODAY Sports

The Conn Smythe odds heavily favor Colorado players as the Avs get set to face Tampa Bay in the finals
Makar leads all remaining players in both points-per-game and time-on-ice
Below, see the updated Conn Smythe odds and betting analysis

The Stanley Cup finals get underway tonight with Game 1 between the Tampa Bay Lightning and Colorado Avalanche. With Colorado favored in both the Lightning vs Avalanche series odds and the Tampa Bay vs Colorado Game 1 odds. it comes as no surprise that the Conn Smythe odds also heavily favor Avs players.

The Conn Smythe-Winner Will Come from the Winning Team

The Conn Smythe has been handed out 53 times since 1965. Only five times in the history of the award has it been won by a player on the losing team. Since 1987, that’s only happened one time (Anaheim’s JS Giguere in 2003).

No player has a statistical edge great enough to warrant winning the Conn Smythe if his team loses the finals. That means the first step to handicapping this prop is handicapping the series. The average Stanley Cup odds have Colorado at -175 and Tampa at +150. Taking out the vig, the implied probability of the finals odds give the Avalanche a 61.4% chance to win, leaving 38.6% for Tampa Bay.

Makar has been nothing short of phenomenal throughout Colorado’s run to the finals, picking up where he left off in the regular season. Now, not only is he a big favorite in the Norris Trophy odds, he’s also the Conn Smythe favorite for playoff MVP.

It’s important for bettors to remember that the Conn Smythe takes into account a player’s body of work throughout the playoffs, unlike the NBA Finals MVP. So what has transpired in the first three rounds of the postseason is very relevant. And as the table below shows, among the players who are still alive, Makar has been the best of the bunch, statistically.

That said, the table above only compares skaters. The X-factor here is the man who won the award just last season: Tampa Bay goalie Andrei Vasilevskiy.

The Russian has taken a small step back compared to last year’s playoffs, but has still been excellent between the pipes.

In reality, I think that drastically undervalues his the Russian’s chances of winning if he backstops the Bolts to a third straight Cup.

It’s highly likely that the Avalanche are going to control the majority of play throughout the series and generate significantly more shots on goal. If Tampa wins, the box score is going to make it look like Vasilevskiy stole some games. And that’s the kind of narrative that voters love.

Sascha was a hockey player in his youth, a lawyer in his capricious mid-20s, and has now been an assigning editor, writer, and lead oddsmaker for SBD for over seven years. He covers everything you can possibly put odds on, but specializes in football, baseball, hockey, and basketball.

Sascha was a hockey player in his youth, a lawyer in his capricious mid-20s, and has now been an assigning editor, writer, and lead oddsmaker for SBD for over seven years. He covers everything you can possibly put odds on, but specializes in football, baseball, hockey, and basketball.