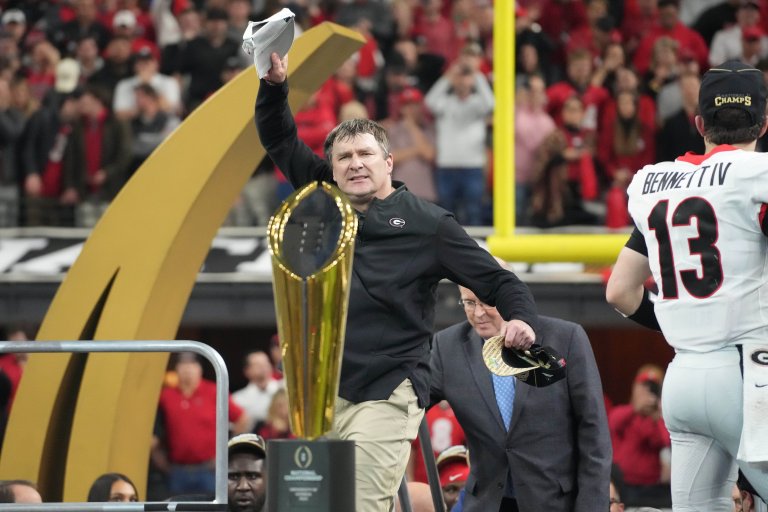 The 2022 college football season begins with a smattering of games on Aug. 27
Win totals can move quickly after oddsmakers get an on-field look at a team’s roster
Read below for college football win totals odds, and the best bets to make before kickoff

The 2022 college football season kicks off with 11 games on Aug. 27, although most FBS programs start the following week.  The CFP championship game will be played Jan. 9 at SoFi Stadium in Los Angeles, the site of the 2022 Super Bowl.

College football win totals can change dramatically early in the season after oddsmakers get an initial look at the impact of not only coaching and scheme changes but also of high-profile newcomers, especially those from the transfer portal.

Which programs are overvalued entering 2022? Which are undervalued? Here are my four best CFB win totals plays and analysis.

All odds from Barstool Sportsbook on Aug. 15. Win totals are regular season only.

Why not begin with the defending national champion? Georgia’s run to its first NCAA title in 41 seasons included dominating victories over Michigan and Alabama in the CFP final four, with the championship game win over Alabama avenging its only loss to the Crimson Tide in the SEC title game.

Oh my Stetson Bennett delivered an absolute DIME through the mail pic.twitter.com/UBx8yU4T5y

This may be a very good team, but it is not the same team. A record 15 Bulldogs were selected in the 2022 NFL draft, including eight starters from defensive a unit that held opponents to 10.2 points and 268.9 yards per game, first and second in the FBS, respectively. That’s in a conference in which nine teams averaged at least 29.1 points per game.

The dominance they demonstrated in 2021 is historically unsustainable, although you could not prove it based on the early national championship odds.

Luke Fickell has done one of the best coaching jobs in the FBS in the last half-dozen years, building Cincinnati from a solid program into a national contender in his six seasons.  He has some retooling to do this season, the Bearcats’ last in the AAC before joining the Big 12, although they remain the league favorite in the preseason college football conference title odds.

How the Bearcats replace efficient (and underrated) four-year quarterback starter Desmond Ridder, the best cornerback tandem in the FBS in No. 4 overall NFL draftee Sauce Gardner and Jim Thorpe Award winner Coby Bryant, and a Group of Five-record nine NFL draftees will tell the tale.

KEEP IT ROLLING [email protected] checks in at #23 in the preseason @AP_Top25 poll. The 45th consecutive appearance for the Bearcats is the fourth-longest streak in America.

Evan Prater and Ben Bennett are the candidates to take the first snap of the season at explosive Arkansas, a game that will give an early indication as to the Bearcats’ defensive recovery. Cincinnati misses AAC title contender Houston, but has road games at SMU and UCF.

Minnesota had a nine-win season a year ago, including a bowl game victory over West Virginia despite losing top running back Mo Ibrahim in the season opener against Ohio State and being forced to go deep in the depth chart at that spot.

Loved seeing Mo Ibrahim back today after season-ending injury in last year’s opener. Enters the season on a school record streak of 9 straight 100 yard rush gms. Gophers had 5 diff players rush for 100 yards in a game last year – just the second B1G team to do that this century pic.twitter.com/N6EctpQA7y

Fifth-year quarterback Tanner Morgan has not come close to duplicating his 30-touchdown 2019 season, but Fleck summoned old friend Rick Ciarrocca to take over the offense in 2022 after a year with West Virginia. Morgan should not feel like the lone ranger — Ohio State quarterback C.J. Stroud is the only Big Ten quarterback listed in the Heisman Trophy odds.

The Golden Gophers were third in the FBS in total defense (278.8 yards per game) and sixth in the FBS in scoring defense (17.3 points), although sharps understand that because Minnesota struggled offensively (99th in the FBS), opponents could play it closer to the vest. Minnesota has a favorable schedule, missing both Big Ten West 1-2 contenders Ohio State and Michigan and playing Purdue and Iowa at home.

Arizona has nowhere to go but up after breaking a 20-game losing streak against COVID-depleted California last season, the Wildcats’ only win in coach Jedd Fisch’s first year.

Barstool Sportsbook is listing Arizona at only 2.5 in the college football win totals, which is just too low for this improved Pac-12 school.