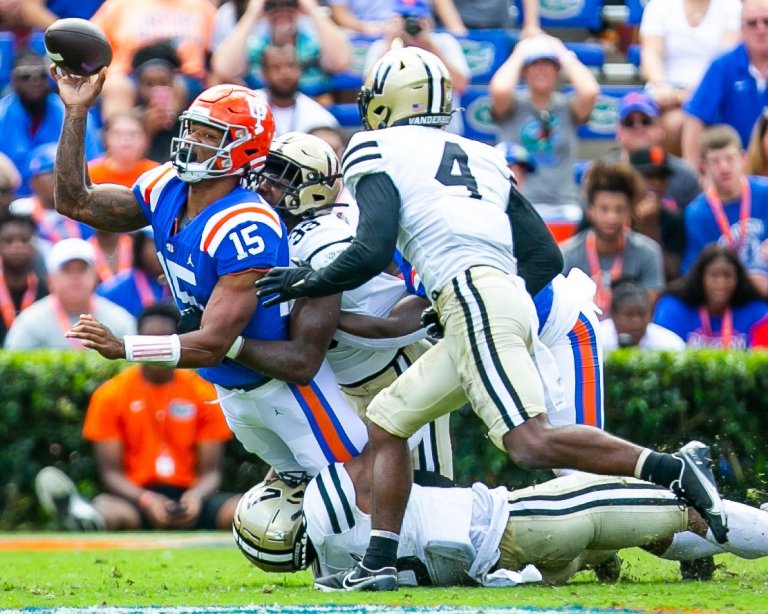 Florida Gators quarterback Anthony Richardson (15) makes a pass as he is tackled in the first half. The Florida Gators lead 21-0 at the half over the Vanderbilt Commodores Saturday afternoon, October 9, 2021 at Ben Hill Griffin Stadium in Gainesville, FL. [Doug Engle/Gainesville Sun]2021

Here are some key betting trends to take under consideration when planning those Week 0 wagers:

Western Kentucky is playing Austin Peay for the first time in a decade. That’s good news for backers of the Hilltoppers.

When wagering on Week 0 college football in the state of Nevada, go all-in on the Nevada Wolfpack. However, run as fast as you can to get money down on the Idaho State Bengals, who are playing the UNLV Runnin’ Rebels.

One of the most bizarre college football betting trends of them all involves Vanderbilt and season openers. Throughout the past decade, the Commodores are 2-8 straight up in the first game of the season.

The oddity in this trend is that both Vanderbilt season-opening victories have come at the expense of Middle Tennessee State. The Commodores beat the Blue Raiders 35-7 in 2020 and 28-6 in 2019. Against any other school, Vanderbilt is 0-8 in openers since 2012.

The 2022 meeting between Vanderbilt and Hawaii will be the Commodores’ first football game out of the continental United States.
Look at this y’all this is a pretty awesome fact about Vanderbilt football y’all pic.twitter.com/6XknOrBbny

Vanderbilt is set as 8-point favorites on the road against the Rainbow Warriors on Saturday, August 27 (10:30pm ET, CBSSN). It doesn’t matter.

Last year, the Commodores were the 21-point chalk at home to East Tennessee State. They lost 23-3. Saturday’s contest is marking the first time Vanderbilt has been a favorite in the past nine games.

Remember when Nevada was the only place in the USA where you could bet on sports? It wasn’t all that long ago, when you think about it. Remember the last time the UNLV Runnin’ Rebels posted a winning college football season? Okay, that was a long time ago.

Generally, they don’t get off to good starts. UNLV is 2-10 SU in the club’s last 12 season openers. In Week 0, UNLV is facing Idaho State. The Bengals are 5-2 SU over their past seven season openers.

Saturday night, under the lights, and on national TV!

On the other hand, there’s the Nevada Wolf Pack. They’re 4-0 both straight up and against the spread in the last four season bows. Last year, Nevada won outright 22-17 at Cal as 3-point road underdogs. In 2018, the Wolf Pack covered as the 28-point chalk against Portland State, winning 72-19.

The Western Kentucky Hilltoppers and Austin Peay Governors will officially kick off Week 0 of the college football season. They tee it up at 12:00pm ET on Saturday, August 27 (CBSSN). That’s a half hour before the Northwestern-Nebraska game gets underway in Dublin, Ireland.

It’s also the renewal of a long-held rivalry. This will be the 43rd meeting between the two schools but the first since 2012. Western Kentucky is holding a significant 35-6-1 SU edge in the series. That includes a 49-10 rout in 2012.

As well, the Hilltoppers shared the college football lead in going over last season, topping the total in 10 of 13 games.