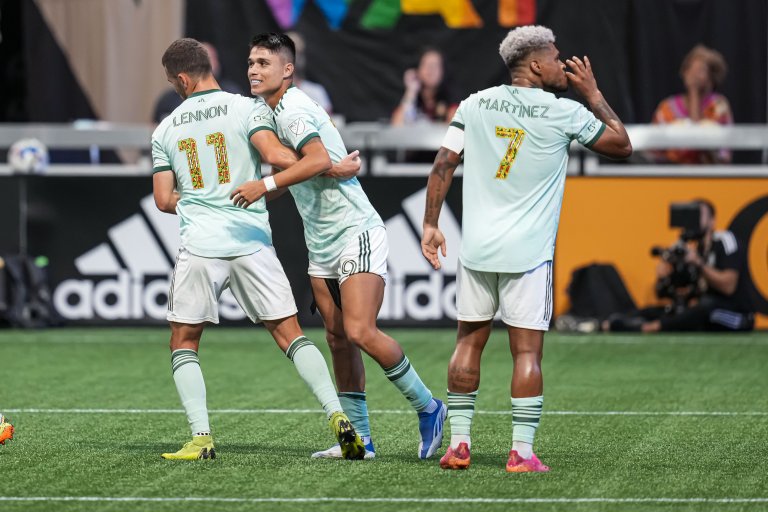 MLS Week 16 features a 13-game card this weekend, with one game Friday night, nine on Saturday and three on Sunday.

One game has been removed from the card. For anyone hoping to bet on the California Clasico between San Jose and the LA Galaxy, it’s been rescheduled to September 24 due to a power outage.

A few teams were in action earlier this week in the US Open Cup Quarterfinals. The LA Galaxy lost 2-1 to USL Championship side the Sacramento Republic. Sporting Kansas City blew away USL League One team Union Omaha 6-0. Meanwhile, the Hudson River Derby saw the New York Red Bulls top NYCFC 3-0.

Read on for the odds for every MLS Week 16 game, as well as our best MLS betting predictions.

There are many ways to bet on soccer from the odds above which lists Seattle, RSL, and Montreal as the biggest favorites this weekend. And while the Crew may be big dogs in Salt Lake, they made a huge club-record signing for striker Cucho Hernandez from Watford this week.

There’s only one team favored to win on the road in MLS Week 16 and that is Atlanta United (+112) over Toronto FC. A true indictment of just how poor TFC has been this season.

Seattle has been taking money this week, shortening from -125 to -141, giving them an implied probability of 71 percent to win. But, it should be noted they’ll again be without injured striker Raul Ruidiaz. Against a Charlotte team still winless on the road, Montreal at home could look like a strong play. But they’ll also be without Djordje Mihailovic and have looked lost offensively without the American.

MLS Week 16 gets rolling with a standalone match Friday night at 7:30 pm EST with FC Cincinnati vs Orlando City SC.

Orlando sits inside the playoff spots, fourth with 25 points. Cincinnati are five points in eighth, just outside the playoffs, but are tied with 20 points alongside seventh-place Charlotte.

FCC may be slumping of late with no wins in their past three, but they’re still having their most productive season in their short history. Their 20 points equal their points total from all of 2021 already. Despite being 0-1-2 in their past three, they’ve still scored six goals in those three games. They’ve scored in each of their past eight (club-record) and in each of their past five at home in TQL Stadium. Brandon Vazquez is up near the top of the Golden Boot race with eight goals himself. But, of their six overall home games, they’ve conceded in five as well.

The Lions of Orlando defeated Houston at home 2-1 in their last outing. It was their first win in four, while all four have seen both teams scoring. In fact, both teams have scored in six of Orlando’s past seven.

Oscar Pareja’s Orlando City is one of the league’s top road teams this season at 3-4-1. They’ve actually kept four road clean sheets and have scored in every road game, save for their first on the road in Chicago.

It’s not the most appealing price, but I think backing both teams to score is still a good bet here. If you want to push it a bit further with both scoring and over 2.5 you could consider that soccer prop at -104 odds. That bet would’ve cashed in their earlier meeting this season, a 2-1 FCC win in Orlando.

It’s the early stages of this Texas Derby. The teams have played only three times so far, all last season, and all Dallas wins. Those came by 2-0, 5-3, and 2-1 scores. That 5-3 win was the only game that was played in Austin at Q2 Stadium, the location for this match in MLS Week 16.

These teams match up near the top of the standings right now, with Austin third with 27 points, and Dallas fourth with 25.

Austin is a highly rated Over team at 10-5. But they escaped with a 1-0 win in Montreal last week. It was an impressive win considering they went down to 10 men in the 44th minute. Rather than conceding, a Max Urruti goal in the 67th minute proved to be the winner. Austin has now scored in six of seven at home.

A match as wild as Rainey street tonight. pic.twitter.com/8PSwZFuM6l

FC Dallas is coming off a disappointing 2-0 home defeat to Vancouver last week and they’ve now lost three of four where they’ve conceded twice in each of those losses. Dallas’ xGA may rank third overall in all of MLS, but they have still conceded at least a goal in 11/15.

Dallas has owned Austin so far, but Austin is a stronger team in 2022. This game will feature both Jesus Ferreira (DAL, 9 goals, 1st) and  Sebastian Driussi (AUS, 8 goals, 2nd) ranking at the top of the Golden Boot race.

If you’re looking for a goalscorer prop Ferreira scored four goals, and at least once in all three games versus Austin last season. His anytime scorer odds are +250.

As mentioned earlier this is the lone game where the road team is favored in MLS Week 16. And it makes sense. Toronto has just 15 points in 15 games and sits 12th in the East. Atlanta has taken money during the week as well. I saw them as long as +137 earlier in the week, and now as short as +112.

TFC has won just one of their past eight and after Week 15’s 2-0 loss to the Red Bulls, they’ve now allowed a goal in 23 straight league games. For a while, TFC was at least contributing some offense, but failing to win. However, they’ve been held off the scoresheet in three of their past six. They did win 3-2 over Chicago and drew 2-2 with DC prior to the New York loss. TFC has scored in six of seven at home at BMO Field in Ontario.

Atlanta is no doubt the stronger team here. With Josef Martinez back from a knee injury (goal and assist in his first start last week), along with the likes of Ronaldo Cisneros, Thiago Almada, Luiz Araujo, and Dom Dwyer, they have plenty of firepower to score goals.

The plus-money on the Atlanta win does look tempting. Though away from Mercedes-Benz Stadium the Five Stripes are just 1-1-4, scoring five and conceding ten. They’ve kept just a single clean sheet in six road games, allowing multiple goals in four, which gives me some pause for a win.

It was a much needed win and clean sheet for Atlanta United. @ATLPilgrim has a short recap and everything said by Rob Valentino, Josef Martinez, Luiz Araujo, Caleb Wiley, and Rocco “the ‘stache” Rios Novo after this 2-0 win over Miami. https://t.co/L0jzmezP9t

Toronto seems to be saving their best performances for the Canadian Championship. If you look at their overall results, they’ve actually won four of their past five, however, three of those wins came in the tournament. The most recent was a four-goal explosion at home to CF Montreal on Wednesday in a 4-0 win sending them into the finals.

That was no doubt their most important match of the week as a win in the final would send them to the CONCACAF Champions League, something they look to have no chance of accomplishing through league play this year.

Considering Toronto has failed to keep a clean sheet in 23 straight MLS games, you have to assume they’ll concede here, but I’ll bet Atlanta finds the back of the net at least twice.

LAFC sits first in the West and also overall in all of MLS heading into MLS Week 16. Los Angeles has had a week off after last week’s 1-1 draw in Seattle. Scoring that one goal, means they’ve now scored in all but one game this season. At home, LAFC hasn’t failed to score a goal in 33 games, dating back to August 22, 2022.

The Red Bulls are second in the East and keep things tight. They’ve allowed just 17 goals on the season. They’re also strong on the road at 5-1-2, the best road record in the league.

New York has lost just twice in their past nine, but are coming off midweek play against rivals NYCFC in the US Open Cup. They’ve also allowed a goal in seven of their past eight games

LAFC is rightfully favored at home, but I’ll just throw LAFC to score as a parlay piece into this next selection below.

Both of these teams have been improving after slow starts. Vancouver managed just one win in their opening eight matches. But in their past eight, they are 5-1-2 and have scored in seven of those matches. At home at BC Place in Canada, they’ve scored in each of their past six. Lucas Cavallini has goals in each of his past four, including one in last week’s 2-0 road in Dallas.

Vancouver is now eighth in the West with 20 points, just behind Seattle for the final playoff spot heading into MLS Week 16.

They’re starting to score goals, but are still giving up plenty of chances. They’ve given up 1.1 xGA or higher in each of their past eight. On the season the Whitecaps rank 27th in xGA at 24.8.

New England hasn’t lost to Vancouver since 2015. However, the Caps have lost just 2/16 at BC Place of late.

The Revs are sixth in the East with 23 points. They were 2-1 home winners over Minnesota United last weekend, extending their undefeated streak (4-4-0) to eight games. Outside of a four-game slide ealier this season, the Revs have only lost once in their past ten. Even with the departure of Adam Buksa, the Revs are still finding offense, so long as Carles Gil and Gustavo Bou are in the lineup. However, defensively they’ve been leaking oil. New England has conceded in 14/16 on the season and both teams have scored in each of their past seven.

This looks like another match where that streak could continue.