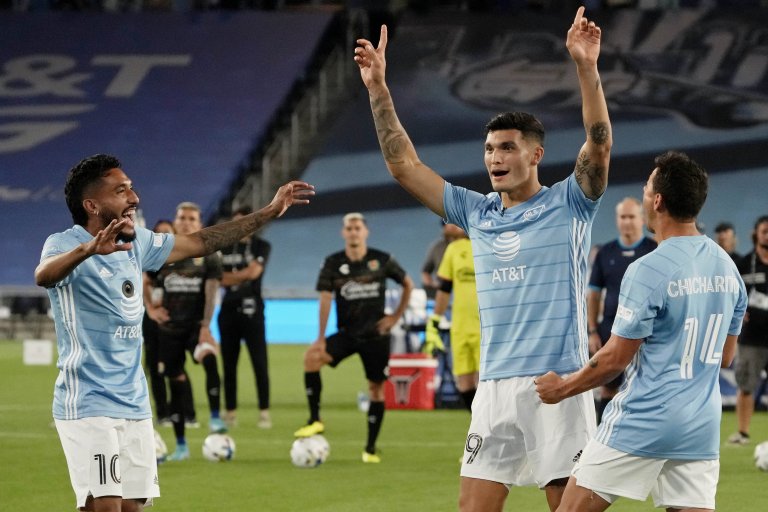 MLS All-Star week is in the books after the MLS All-Stars defeated the Liga MX All-Stars 2-1 on Wednesday night. League play picks back up this weekend in MLS Week 25 with 14 matches over Saturday and Sunday and we have our best MLS picks for today below.

Last week was a historic week in Major League Soccer with 60 goals scored across the 14 matches. Only three of 28 teams failed to score a goal, good for an average of 4.29 goals per game in the round. Wow. Look away and you definitely missed something. Let’s hope it continues into this weekend post-All-Star too.

Who looks primed to score this week? Well the biggest favorites on the board above at Barstool, have LAFC, Austin and New England as the heaviest favorites this weekend.

The last time these teams met they drew 0-0 back in April in Atlanta. That was the last time, and only time all season that FC Cincinnati played to a scoreless draw.

Atlanta didn’t play to another 0-0 draw for another 15 games until they drew 0-0 in Chicago on July 30. Last week they won 2-1 at home to Seattle. At home is where the Five Stripes have seen much of their success. They’re 1-3-7 on the road and haven’t won away from Mercedes-Benz Stadium since a 1-0 win in DC on April 2. They’re 0-3-6 since on their travels. They had at least scored in six-straight road matches until being shut out in LA against the Galaxy and then again versus the Fire recently.

Nwobodo is so good at this — driving the play toward one flank, and waiting for the whole opposing defense to start to shift, then playing across his body at the *exact* right moment to give Cincy dynamic superiority.

And also Brandon Vazquez is the best 9 in the league. pic.twitter.com/fMmhXeSHpv

Against Cincinnati, it could be a more wide-open game. FCC hasn’t kept a clean sheet since June 24, allowing a goal in each of their past eight. But that hasn’t stopped Cincy from only suffering one defeat in their past ten and that’s because their offense is firing on all cylinders right now. They just defeated the league’s co-second best team in Philadelphia, 3-1 last weekend. After a 4-4 draw the match prior with Miami, they’ve scored seven goals in their past two matches. But draws have been the most likely outcome of late for Pat Noonan’s side as they’re 2-7-1 in their past ten.

Cincinnati has scored in 16/17 recent matches and in every single home match outside of Week 2, their first home game of the season. Brandon Vazquez leads the team in scoring with 14 goals and has four in his past three games. Meanwhile, Brenner has come alive as the team’s second-leading scorer with eight, scoring three in his past two games. We could see plenty of goals in this one, perhaps from both sides. But Atlanta’s poor road form is concerning so I’ll just back the Cincy team total.

They’re also a completely different team since they were transformed at the end of July with mid-season additions. Just look at the two matches prior to the debuts of Lorenzo Insigne and Federico Bernardeschi. They lost 2-0 and 1-0 and only put up 0.3 xG in each game. Those numbers have taken off since the Italian additions joined the Reds. TFC won 4-0 at home to Charlotte, drew 0-0 in New England and won 4-3 in Nashville last week. Their xG in those games was 1.5, 2.1 and 1.9 respectively. TFC is fun again and somehow they may still find their way into the playoffs this season, despite owning very long MLS Cup odds.

To do so, they’ll need to improve their defense though. Only DC, SKC and San Jose have allowed more goals than Toronto. In some ways, it has improved. Clean sheets versus Charlotte and New England snapped a run of 29-straight conceding a goal. But then they gave up three last week. Their xGA in those past three was still 0.8, 0.8 and 2.9. Giving up just 0.8 xGA is actually their lowest of the season but just the third time they’ve done so. If they were playing a weaker team, I may like their chances of posting another clean sheet given their recent play.

But Portland is rolling right now. They may not be technically the hottest team over the past ten rounds (hello LAFC), but they are the only undefeated one at 4-6-0. Portland took the lead late in the 96′ minute last week through a penalty against FC Dallas, only to concede an own goal in the 100′ to end level 1-1. They also drew 1-1 at home to Nashville the match prior. Their last road match was a wild 4-4 shootout in Minnesota. Their run of ten undefeated matches has seen both teams scoring in 8/10.

It’s been 11 games since the Timbers failed to score a goal. In each of those games, they’ve registered an xG of at least 0.9. But they’ve also allowed an xGA of 1.0 or higher in each as well.

When looking at the ways to bet on soccer for this match, it looks like goals all around.

Here’s a two-teamer from the Saturday card for our MLS picks.

LAFC vs Charlotte FC: The league’s best team, LAFC, faces newcomers Charlotte FC as heavy home favorites in MLS Week 25. It’s really hard to find value on LAFC unless you bet them on a large spread or Asian Handicap. LAFC just smashed RSL on the road 4-1 last week, Gareth Bale got his second goal in MLS and LAFC have now won five straight, with a 9-1-1 record in their past 11. Charlotte is a league-worst 1-2-9 on the road and has allowed a combined seven goals in their past two games away from home. They have though, only lost by multiple goals away from home three times all season. Charlotte allows the tenth-most opponent attacking third touches, while LAFC creates the third-most attacking third touches themselves. Anything other than a comfortable LA win would be surprising. Bet them on the spread or just to score at least twice and pair it with a Dallas goal in this parlay.
FC Dallas San Jose Earthquakes: Speaking of bad road teams, may I introduce you to the Earthquakes. Sure, they drew 3-3 in Austin last week, but they are 1-4-7 on their travels this season and have conceded 27 goals in those 12 road matches. The Earthquakes rank 27th in xGA and 28th in goals allowed. FC Dallas may not be in top form right now, but they are 6-3-3 at home and have scored in 10 of those 12. Jesus Ferreira and co. should be able to at least score once against this San Jose backline.

Raul Ruidiaz makes it 2-0 MLS from the penalty spot after Carles Gil drew the penalty.

And here’s another parlay from the two games on Sunday for MLS Week 25.

Nashville SC vs Minnesota United: Last week I said this about Minnesota in that they were, “…7-4 to the Over on the road. However, all seven of those road Overs have come in their past seven. Simply put, the Loons on the road equals goals. They’ve conceded in 10/11. Not only has a bet on both teams scoring cashed in seven straight Minnesota road matches, but so too has the both to score and the Over 2.5.” That was before their road game in Colorado. That game was 3-2 for the Rapids at the half and 4-3 for the Rapids at full-time. So add another over and goal to all those stats just mentioned. The Loons have now conceded in 15/16 but have also scored in each of their past ten. Their opponents this week, Nashville are winless in five after losing at home 4-3 to Toronto last week. Both teams have scored in all five of those games, while Nashville has scored in each of their past ten. The Yotes once had a streak of 24 undefeated matches at home. But that has come crashing down as they are just 1-4-3 in their past eight at GEODIS Park.
Seattle Sounders vs Real Salt Lake: RSL may be ahead of Seattle by two points in the table, but they are falling fast. RSL defeated Seattle at home 1-0 back in March, but they’ve now won just once in their past eight matches after losing 4-1 at home to LAFC last week. Salt Lake is 2-4-6 on the road, has allowed a road goal in six straight and a total of 12 goals in those six. The Sounders have 20 goals in 12 home games and they’ve scored in nine of those 12. Raul Ruidiaz is back from injury and just scored the winner in the All-Star Game. He should give Seattle the punch they need upfront to get on the scoresheet.

Pick: Nashville vs Minnesota both teams to score & Seattle to score (-105); 1 unit