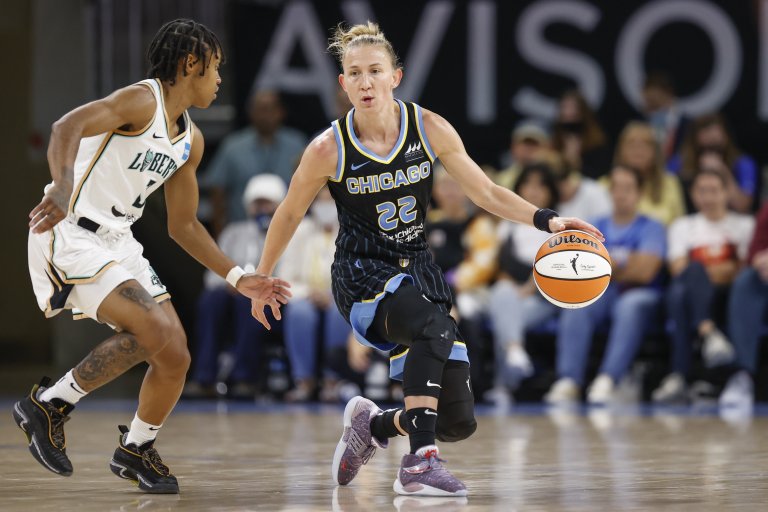 The second-seed Chicago Sky visit the seventh-seed New York Liberty in Game 3 of the WNBA Playoffs at 9:00 pm ET on Tuesday, August 23rd
Chicago and New York are tied 1-1 in the best-of-three series, with the winner advancing to the semifinal round
See below for the latest Sky vs Liberty picks, odds analysis and best bet

The opening round of the WNBA Playoffs continue Tuesday, August 23rd when the second-seed Chicago Sky faces the seventh-seed New York Liberty in a winner-take-all Game 3 at Barclays Center in Brooklyn. The game will be aired nationally on ESPN.

The Sky and Liberty are fighting for a trip to the semifinals in Tuesday’s game, with the series knotted up at 1-1 after two games in the series held in Chicago last week and over the weekend. The winner will advance in the postseason, while the loser will have their season come to an end.

Entering the game, the Sky are listed as 6.5-point favorites over the Liberty.

The series between Chicago and New York has been a tail of two completely different games in the first round of the playoffs. The first game saw the Liberty taking it to the defending champions to steal a game on the road, with the Sky bouncing back to dominate the second game while evening the series.

Chicago, who currently hold the third-best odds in the 2022 WNBA Championship odds at +500, has been impressive throughout the series even with splitting the two games. The Sky have averaged 95.5 points per game, also dominated the rebounding, assists and turnover margins over New York and showcasing why they have been viewed most of the season as a strong favorite to return to the WNBA Finals again in 2022.

New York, which ended the regular season as one of the hottest teams in the league while winning seven of its final 10 contests, carried that hot streak into the postseason. Even with taking a step back in a blowout loss in Game 2, the Liberty have shown the ability to pull off an upset over a superior team as long as their offense is clicking.

In the first game last Wednesday, New York put on a strong offensive performance to steal a game on the road to take an early 1-0 lead. The Liberty finished the game with 11 threes while seeing four of their five starters finish in double-figures. New York took Chicago out of the game early and held the it off late, forcing the Sky into a must-win game in Game 2.

In Game 2 on Saturday, Chicago answered the call in having to rebound after a disappointing Game 1. The Sky dominated the Liberty, putting on an offensive showing that resulted in a 38-point blowout victory which at the time was the largest margin of victory in WNBA postseason history. In that game, Chicago displayed why they are such a dangerous team, now needing to replicate that on the road in Game 3 to take the series.

What to Watch for in Game 3

One of the biggest things of note entering Tuesday’s game is that both teams are going to be mainly healthy. With the exception of Chicago’s Li Yueru (not with team) listed as out, no other injuries are currently listed on either teams injury reports.

For the keys in the game itself, it will be worth watching how New York opens the game at home. If it is able to replicate what took place in Chicago in Game 1, the Liberty could be in a prime spot to defend home court and advance to the semifinals. The Sky, on the other hand, will also attempt to start the game off strong like in Game 2 and take the Liberty crowd out of things right away, which could set the scene for a similar dominating performance for a second straight night.

The biggest key will be which team will be able to put their foot down defensively to keep the other offense in check. Whatever team has been able to do that to this point in the series has come away with the victory.

Coming into the matchup, Chicago is heavy road favorites with a 6.5-point edge in the spread. That means oddsmakers believe the Sky, who were 12-6 on the road this season, won’t be fazed by playing away from home in Game 3. When it comes to who will ultimately come out on top, Chicago should be able to once again flex its muscles like in Game 2 to fend off any attempt of an upset by New York in the opening round.

For the best bet of the night, look at the over/under total of 165.5 points listed ahead of Game 3. The two teams have averaged to combine for an average total of 175.5 points in the two games, meaning they should hit the over in Game 3.