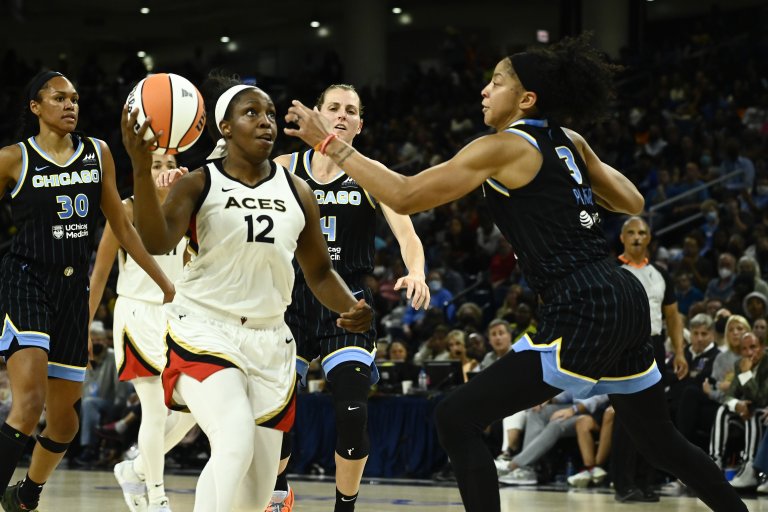 The Chicago Sky visit the Las Vegas Aces at 10:00 pm ET on Thursday, August 11th
Chicago enters the game at 25-9 overall, while Las Vegas comes in at 24-10 on the year
See below for the latest Sky vs Aces picks, odds analysis and best bet

The top two teams in the WNBA face off on Thursday, August 11th when the Chicago Sky visit the Las Vegas Aces at 10:00 pm ET at Michelob ULTRA Arena in Las Vegas. The game will be aired nationally on NBA TV.

The Sky come into the game as the top team in the league with a record of 25-9 overall, having gone 7-3 over their last 10 games. Chicago most recently fell to the Seattle Storm 111-100 on Tuesday in Chicago.

Odds as of August 11th from FanDuel

The Aces enter at 24-10 on the year to sit as the second team in the WNBA standings, having gone 7-3 over their last 10 contests. Las Vegas is coming off a 97-90 win over the Atlanta Dream on Tuesday in Las Vegas.

Chicago and Las Vegas both know they will be top-three teams in the WNBA Playoffs, which begin August 17th, but exactly which seed both teams will hold is still yet to be finalized in the final week of the regular season.

The Sky will be one of the top two seeds, currently in the top spot in the standings while leading the Aces by one game. The lowest Chicago could drop is the second seed, but it would likely take losing the final two regular season games for that to happen.

The Aces have an interesting opportunity in front of them with two games remaining. Las Vegas holds a strong grasp on the second seed, but could still shift up or down in the standings before the playoffs begin. If the Aces win Thursday, they could make a run at the top seed along with Chicago. If Las Vegas losses Thursday, it could end up dropping to as much as the third or fourth seeds.

What’s the highest/lowest each team can finish in the standings?
* playoff bid (Via @ESPNStatsInfo)

Some might think there isn’t much to play for in Thursday’s game in Las Vegas as both the Sky and Aces focus on the upcoming playoff stretch, but there is still a season tiebreaker on the line and postseason positioning up for grabs in this marquee matchup.

Not only is Thursday’s game a battle between the top two teams record-wise and in the league standings, but these two teams have been viewed as two of the favorites to meet in the WNBA Finals for a majority of the regular season.

The Sky and Aces each enter the postseason as two of the top betting favorites in the 2022 WNBA Championship odds, and the odds at DraftKings Sportsbook confirm that as the regular season concludes. Chicago has the top odds of +180, while Las Vegas is right behind the Sky in second with the second-best odds of +190.

#SkyTown are the new favorites to win the #WNBA Title 👀

Sportsbooks view these two teams basically as a toss up and neck-and-neck when it comes to being favorites to bring home the league crown, and Thursday’s game could cause some shifting in those odds depending on the end result of the third and final regular season battle between the two squads.

Key to the Game

The biggest key in this game is which team will flex its muscles more and likely which team will simply outscore the opposition. Entering Thursday, Las Vegas and Chicago have the top two offenses in the WNBA, setting up for a high-scoring affair between the top-tier squads.

The Aces are averaging a league-best 89.9 points per game, while giving up an average of 83.8 points (ranks ninth in the WNBA) to opposing teams. The Sky come in ranked second in the league with 86.6 points per contest, giving up 81.4 points (tied for fourth-lowest) on the other end. Things have come down to the wire in the two meetings between these teams as well, with Chicago holding a one-point advantage (90-89) on average in the previous two games.

Like the first two meetings, Thursday’s game will likely come down to the final minutes in order to decide who will come out on top in the marquee matchup. In the end, the Sky will end up taking down the Aces to get back into the win column and take a hold onto the top seed in the standings behind an impressive road victory.

For the best bet of the night, go with Chicago and the 1.5 points listed for the spread. If the Sky are able to come out on top, they will likely cover by more than 1.5 points