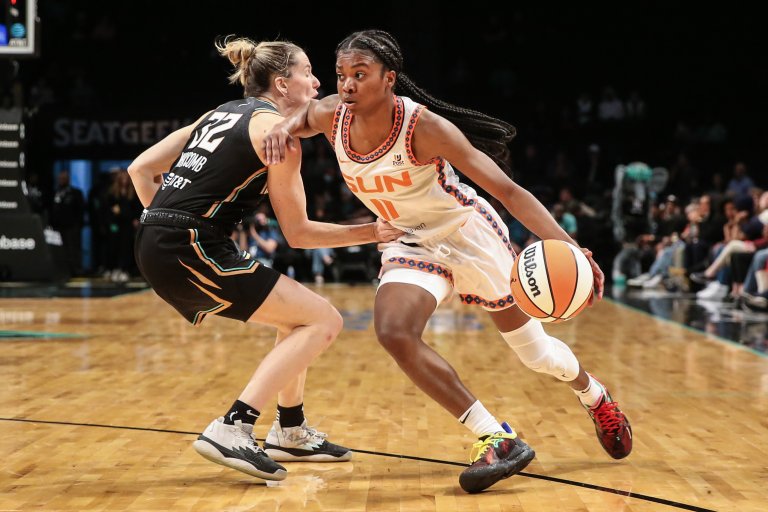 Connecticut Sun are 5-point home favorites over the Chicago Sky in a WNBA afternoon game on Sunday, July 31
Chicago ended a two-game skid with an 89-81 victory over the New York Liberty in their last contest
Connecticut has gone 4-0 straight up over the past four games

Over the course of the WNBA season, the Chicago Sky (22-7) have proven to be the league’s best team. However, at the moment, it’s the Connecticut Sun (20-9) who are the WNBA’s hottest team.

Connecticut is riding the league’s longest active win streak at four games. In the meanwhile, Chicago is 1-2 over the past three games. That’s enabled the Sun to move to within two games of the Eastern Conference-leading Sky.

It’s Connecticut that oddsmakers are setting as the 5-point home favorites in this game, even though the Sky are 2-0 straight up against the Sun this season. These two teams will be completing their four-game regular-season slate against each other on Aug. 7 at Chicago.

Tipoff for this game is set for 1pm ET on Sunday, July 31 at Mohegan Sun Arena. The game is available for viewing on NBA TV and on TSN in Canada.

At a moneyline of -110 on their -5 spread, the Sun are given an implied probability of victory of 53.38%. Bet $10 on Connecticut to cover the spread and if the Sun does indeed come through with the victory by more than five points, that will provide a payout of $19.10.

In future book betting, Chicago is the second betting choice in the WNBA championship odds. The Sky, defending WNBA champions, are given odds of +220  to win the title. The Sun are the fourth choice in this betting market at +500.

An 89-81 triumph over the New York Liberty in their last game ended Chicago’s two-game slate. Missing all-star forward Candace Parker (non-COVID illness), it was guard Courtney Vandersloot, only recently back herself from a concussion, who was pacing Chicago’s return to the win column.

Vandersloot finished with finished with 23 points on 6-for-10 from the field, six rebounds and nine assists. Amazing, in 31 minutes on the floor, she didn’t commit a single turnover. It was only the sixth time in WNBA history that a player has put up at a minimum of 20 points, six rebounds and nine assists without committing a turnover. However, it was the second time Vandersloot has done it.

It was the Liberty who started Chicago’s brief skid with an 83-80 verdict on July 23. Then Chicago dropped the Commissioner’s Cup final to the West-leading Las Vegas Aces by a 93-83 count. Falling behind 33-14 in the first quarter of that game proved too large of a burden for the Sky to overcome.

However, it should be noted during that streak that other than an 88-83 victory over the Seattle Storm (19-11) in the last game, Connecticut posted two wins over the Minnesota Lynx (11-19) and one over the Liberty (10-18). So they haven’t exactly been whipping the WNBA elite.

With their win against the Storm, the @ConnecticutSun have clinched a spot in the 2022 WNBA playoffs! pic.twitter.com/WgLCXNB9VH

Balance was the name of the Sun’s game against Seattle. Forward Alyssa Thomas  (19 points) was among five players who hit for double digits. Brionna Jones scored 13. DeWonna Bronner went for a double-double with 12 points and 10 boards. Courtney Williams also scored 12 and Dijonai Carrington contributed 11 in just 16 minutes on the floor.

It’s been a rough patch of late for Chicago. The setbacks to the Liberty and Aces were the first back-to-back losses of the season for the Sky.

The @chicagosky pick up their 22nd win & hold onto the best record in the W ? pic.twitter.com/16WV8OQUit

However, they’ve saved their best basketball for the beasts of the East. Chicago is 2-0 agains the Sun. That includes an 83-79 victory at Connecticut on June 10. The Sky are also 2-1 against the 18-12 Washington Mystics.