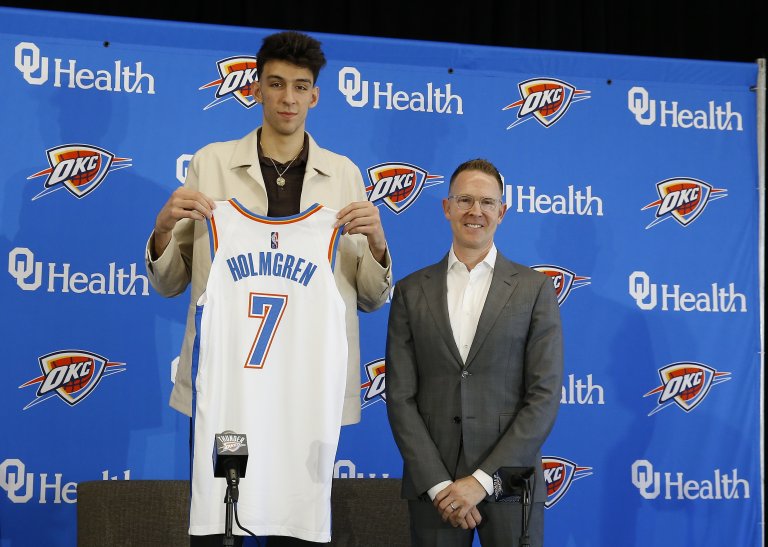 Summer League play is always bound to have an impact on NBA Rookie of the Year odds. It took just one appearance from Chet Holmgren to reshape the top of the betting market, with the second overall pick moving up to the favorite ahead of Orlando’s Paolo Banchero and Houston’s Jabari Smith Jr.

Jaden Ivey and Keegan Murray, the fifth and fourth overall picks respectively, are the only other rookies priced at below +1500. Indiana’s Bennedict Mathurin is in a group on his own at +1500 ahead of New Orleans’ Dyson Daniels and Portland’s Shaedon Sharpe at +2100.

NBA Rookie of the Year Odds

Odds as of Jul 06 at FanDuel

Banchero was the betting favorite on draft night at +300, ahead of Smith (+350) and Holmgren (+475). It hasn’t taken long for a considerable change, with Holmgren leapfrogging the first overall pick and third overall selection to become favorite at FanDuel.

There has been a wave of support for Holmgren in the wake of a box office Summer League debut. It’s often a mistake to get too swept up in Summer League performances, but Holmgren was particularly special, scoring 23, grabbing seven boards, and blocking six shots. He made four threes and exhibited the shooting touch which is part of what made him such a sought-after prospect. He even drew comparisons to Dirk Nowitzki with his mid-range fadeaway game.

Holmgren is an intriguing prospect — the upside is abundantly obvious, but his skinny frame is fuel for his detractors. The first taste of him in an NBA game, though, was everything Holmgren’s biggest fans expected. He was grabbing and going from the defensive glass, picking out teammates and showed the sort of defensive ability which made him such an impactful player on that end with Gonzaga.

I see u cookin 7. First day on the job was a success, love the kicks @ChetHolmgren https://t.co/sQrgDpPCU0

With better spacing on an NBA court, the potential of Holmgren is tantalizing as a scorer, defender and playmaker. He will be allowed to play through mistakes on the rebuilding Thunder, and it’s no surprise he’s getting a lot of money for Rookie of the Year after his Summer League debut.

Other Rookie of the Year Candidates

Despite such a stellar performance on Tuesday, it’s still fair to have doubts about Holmgren as a Rookie of the Year candidate. He’s not expected to put up big scoring numbers in his first season alongside Shai Gilgeous-Alexander, which is often a considerable factor in Rookie of the Year voting. We are, of course, yet to see how his frame holds up against proper NBA competition.

This has the makings of an open race for the award. Attention is naturally drawn to Banchero, who will immediately be the number one option on offense for a Magic team in dire need of a scorer of his caliber. The opportunity and shot volume is there for the ultra-skilled Banchero to score 17+ plus per game with a healthy rebounding return, too.

While Smith is a great fit on Houston, he’s unlikely to post the same numbers as Banchero with Jalen Green and Kevin Porter Jr getting up a lot of shots. They combined for 27.4 field goal attempts per game last season. Outside of the top three, Jaden Ivey has the skillset and fit to put up hefty scoring numbers, and Keegan Murray has impressed in a big way in his opening Summer League appearances.

Of the two, Murray is the better value at +900 given his off-ball movement and shooting ability. He’s going to get a lot of good looks next to De’Aaron Fox and Domantas Sabonis. Efficiency could be an issue for Ivey early in his professional career.

Zero idea what it means but the movement and movement shooting from Keegan Murray intrigues me. pic.twitter.com/DTcO6p7e1s

Nikola Jovic is another name to keep an eye on at +8000. The Serbian isn’t set for a major role with the Miami Heat, but that could change if they swing a big trade for Kevin Durant or Donovan Mitchell. He dropped 25 points on Tuesday and has a well-rounded offensive game to be immediately effective in the NBA next to Jimmy Butler.

This Rookie of the Year race is going to meander plenty before the season even starts. Banchero should still be the favorite given the role he will have in Orlando — this is a good time to back the former Duke forward at +440.