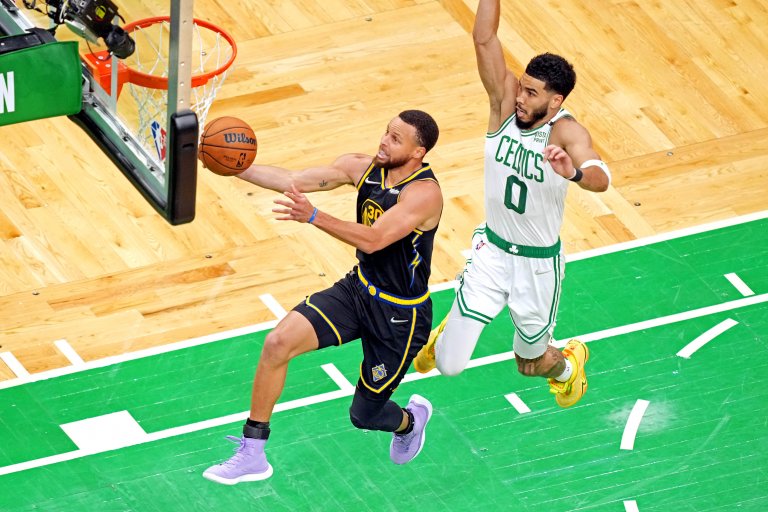 The Golden State Warriors open as 3.5-point home favorites over the Boston Celtics for Game 5 of the NBA Finals on Monday, June 13
The series is tied 2-2 following Golden State’s 107-97 Game 4 win at Boston
How will the odds be moving on this game? That is all assessed in the following story

As the Boston Celtics – and the rest of the basketball world – found out Friday, rumors of the demise of both Steph Curry and the Golden State Warriors prove to be greatly overstated.

A 107-97 victory by the Warriors over the Celtics at TD Garden leaves the best-of-seven NBA Finals deadlocked at 2-2 as they head back to the Bay Area for Game 5. Curry, who left Game 3 with a leg injury and was an uncertain starter, poured in a game- and series-high 43 points.

Oddsmakers have taken notice and done a 180. It’s the Warriors will carry the favorite’s tag now for both Game 5 and the NBA Finals. Golden State is a 3.5-point pick to win Game 5. Boston was a 4-point choice in Game 4.

Overall, the Warriors are the -120 chalk to win the 2022 NBA Finals odds. Boston’s championship odds have lengthened to +120.

Game 5 is slated for a 9 pm ET start at the Chase Center on Monday, June 13. ABC is airing the broadcast, with TSN carrying the game in Canada.

Two of the final three games of this set will be played at the Chase Center. Bettors can access an NBA betting line of +155 on Golden State winning the series 4-3.

In terms of NBA betting trends, there’s a definite pattern in play here. Golden State opened as the 4-point choice for each of the first two games at the Chase Center. Boston was the 3.5-point betting choice for both games at TD Garden, so this will be the third successive game with a 3.5-point spread.

Curry’s explosive performance only served to add to his NBA legacy. He’s averaging 34.3 points per game in the Finals.

Against the No. 1 defense and the DPOY.

A game that featured 11 lead changes turned Golden State’s way for good via a 10-0 Warriors run in the fourth quarter. Curry hit two of the baskets during that run. Meanwhile, the Celtics were 0-for-6 from the field in that span.

It’s the 26th successive playoff series in which Golden State has won a road game.

Fill In The Blank

Did arrogance get the better of the Celtics? Prior to the game, every seat in TD Garden was draped in a T-shirt featuring Boston’s 17 NBA championship banners, along with a blank spot to insert #18.

Golden State went with a bigger lineup in Game 4 and it caused problems for Boston. Boston’s bigs are fading as the series progresses. Al Horford is looking every bit of his 36 years.

Time Lord has two swats at the half.

Hobbled by a knee injury, Robert Williams III looked to have tweaked that injury late in the game. The Celtics need the length of Williams. Boston was +6 in the game with him on the floor.

They Are The Warriors

Curry is clearly the MVP of this series. He’s carrying the Warriors on his back, bad leg and all. No other Golden State player scored more than 18 points in Game 4.

How Steph carrying the Warriors pic.twitter.com/9f6v8WUZeX

The public loves a romantic story. Knicks fans still wax poetic about how an injured Willis Reed willed New York to an NBA title. Everyone will want to get on the Steph bandwagon. Look for that action to move the number on Golden State.