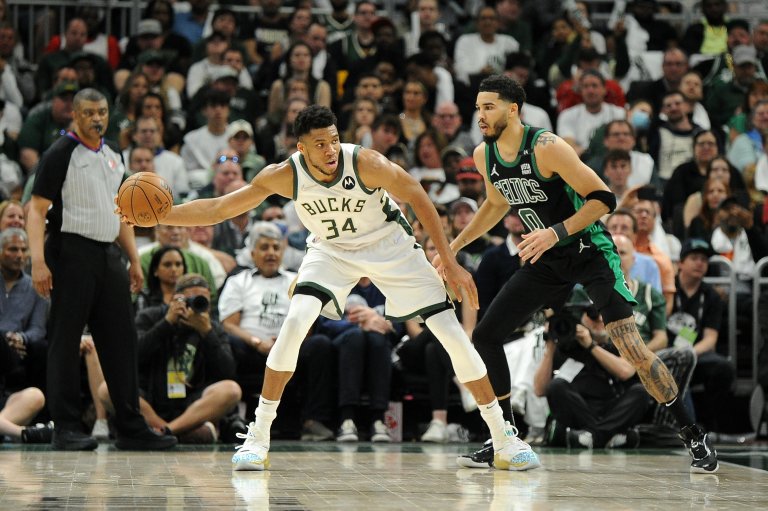 May 9, 2022; Milwaukee, Wisconsin, USA; Milwaukee Bucks forward Giannis Antetokounmpo (34) is guarded by Boston Celtics forward Jayson Tatum (0) in the second half during game four of the second round for the 2022 NBA playoffs at Fiserv Forum. Mandatory Credit: Michael McLoone-USA TODAY Sports

The Boston Celtics vs Milwaukee Bucks is the betting favorite for the Eastern Conference Finals
Boston was an NBA Finalist a year ago, ousting Milwaukee in Round 2
See the matchups below and our favorite pick

The NBA Championship may reside in the Bay area, but it’s hard to argue that the east will again be a beast, and probably the tougher of the two conferences this season.

In the battle to get out of the East, NBA betting oddsmakers like the Boston Celtics and Milwaukee Bucks squaring off for the right to get to the Finals. Not surprisingly, they’re two of the top five teams in the 2023 NBA Championship odds, too.

Still, with a top-heavy pack of squads that can legitimately compete for the conference’s top seed, we’ll need to explore these odds and see if there’s a value bet on the board.

Of course, there’s one unknown variable that we need to discuss — more on that below.

If there’s such a thing as patience in today’s NBA, the Boston Celtics had it, rewarded for not breaking up the Jayson Tatum and Jaylen Brown pairing with their first trip to the Finals since 2010.

While they buckled to the Warriors, the C’s went at their weaknesses hard in the offseason.

Malcolm Brogdon won’t allow the #Celtics to be unorganized and shoot themselves in the foot like we saw last season pic.twitter.com/sQwl3hxH6c

The addition of Malcolm Brogdon gives Boston a true playmaking guard, and someone who can get the offense in motion when it bogs down. If you watched the playoffs, this was a major problem throughout. Ditto secondary scoring. The Celtics’ bench was a non-factor down the stretch, making the addition of Danilo Gallinari much welcomed.

The Italian stretch-4 can get buckets in a variety of ways, and Ime Udoka can count on a veteran that can stabilize the second unit.

One of the teams they ousted en route to the Finals was the Bucks, beating Milwaukee on the road in Game 7 in Round 2.

One year ago today, the Milwaukee Bucks win their first championship in 50 years. pic.twitter.com/JrB3mPdsNV

Milwaukee didn’t do much this offseason to reload, save for a sneaky-good Joe Ingles pickup. They didn’t need to though: Giannis Antetokounmpo is currently the best player in the NBA and is a fixture in the NBA MVP odds conversation. They’re also just a year removed from winning a ‘chip.

The Bucks may have very well beaten the Celtics in Round 2 in their title defense, but Khris Middleton sprained his knee in Round 1, and didn’t play again. If he’s healthy, the NBA playoff landscape shifts, dramatically. With a good batch of role players to surround Giannis, Middleton and Jrue Holiday, Milwaukee is business.

If you’re looking to make a wager, you’ll do wise to anticipate where you think Kevin Durant will end up.

The all-world forward requested a trade from the Brooklyn Nets this offseason, but no team has stepped up to the plate with the type of mind-blowing offer expected from one of the best five players on the planet, and easily one of the best in his generation.

Should the Toronto Raptors eventually give up a package centered on reigning Rookie of the Year Scottie Barnes, they instantly shift from good to title contenders. Raptors vs Bucks at +2200 suddenly seems awfully appealing.

Should the Raps trade for KD if it means giving up Scottie Barnes? 🤔 @hallofjeff caught up with Raps fans attending #NBASummerLeague to gauge the temperature of ‘The North’. 🦖 pic.twitter.com/bK07iK0NlU

While the Miami Heat probably don’t have the pieces to swing this deal — unless they’re willing to part with Bam Adebayo — they could still finagle Jazz dynamo Donovan Mitchell from Utah. Bucks vs Heat at +1300 offers some value.

However, if those predicting the Nets don’t part with their star, Brooklyn’s front office made moves to legitimately keep them title contenders, assuming KD and Kyrie Irving are still around.

Ben Simmons should be ready for his image rehab tour, while Royce O’Neal and TJ Warren give BK that added wing depth needed to not wear down Durant. Keep an eye out for Nets vs Bucks at +1800.

Should the Celtics go all in for KD?

“Absolutely. But that’s assuming that ‘all in’ means ‘anyone is available except for Jayson Tatum.’ I’m not saying Tatum is better than KD but he’s 24. But everyone else, yes. Bye, Jaylen, Marcus & picks.” — @Chris_Broussard pic.twitter.com/Tifreu0T3q

Of course, the latest trade talks involve the Nets and Celtics. If a package built around Jaylen Brown and picks is accepted by Brooklyn, we’re kind of right where we started at the top of the odds board.

Bank on the Bucks being in the Final Four. Personally, I don’t think Durant is going anywhere, and he makes Brooklyn an instant East monster.