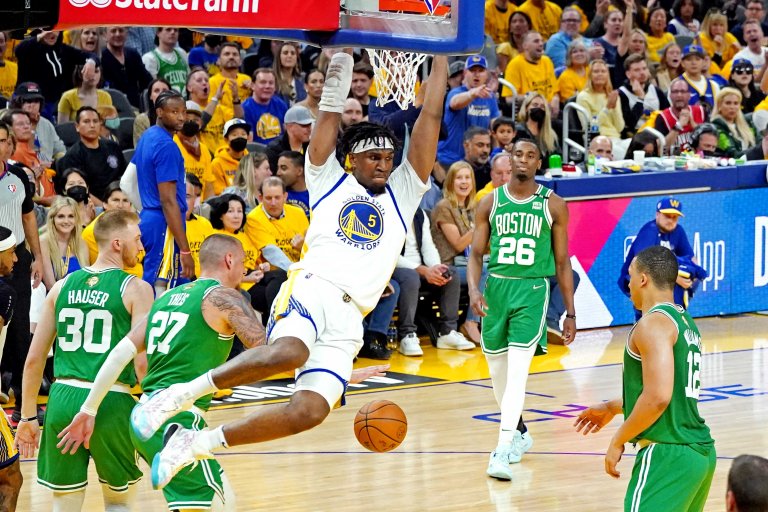 The Boston Celtics are the 3.5-point opening-line home favorites over the Golden State Warriors for Game 3 of the NBA Finals on Wednesday, June 8
This best-of-seven series is deadlocked 1-1 following Golden’s 107-88 victory in Game 2
How will the odds be moving on this game? That is all assessed in the following story

This time, when the Golden State Warriors put their foot on the gas, they didn’t give the Boston Celtics a chance to catch up. A 35-14 third-quarter edge on the scoreboard powered the Warriors to a 107-88 triumph over the Celtics in Game 2 of the NBA Finals on Sunday.

Golden State squandered a 14-point fourth-quarter lead to Boston in Game 1 of this best-of-seven set.

As this series switches to Boston, oddsmakers are expecting the Celtics to be rebounding in a big way. Boston is set as 3.5-point home favorites in the opening line for Game 3. However, the Celtics are just 20-26-1 against the spread as a home favorite this season.

Tipoff for Game 3 is set for 9:00 pm ET at TD Garden on Wednesday, June 8. ABC is carrying the broadcast. Canadians can catch the action on TSN.

Boston remains the favorite to defeat Golden State in the NBA title odds. The Warriors were the 4-point chalk for Game 2.

In Game 1, Golden State allowed Boston to go on a 48-18 second-half run and turn around what was looking to be a decisive Warriors victory. That didn’t happen in Game 2.

Leading by a scant two points at halftime, Golden State assembled a 43-14 run that left the Celtics distanced. Steph Curry led the way with 29 points.

He was one of five Golden State players who scored in double digits. Jordan Poole (17 points), Kevin Looney (12), Andrew Wiggins (11) and Klay Thompson (11) were the others.

The 40-14 third-quarter margin for Golden State marked the 92nd time in these playoffs in which one team held a double-digit margin over the other in a quarter. That’s an NBA single-season playoff record.

Boston entered Game 2 with a perfect 4-0 straight up record at Golden State’s Chase Center. Even with the loss, the Celtics remain 8-3 on the road in the playoffs. In NBA playoff history, only the 1995 Houston Rockets (nine) won more road games in one postseason.

Still, with the next three games at TD Garden, Boston need only hold home-court advantage and the NBA title will belong to the Celtics. However, that won’t be easily done. Golden State has won at least one road game in 26 consecutive NBA playoff series.

Injury Concerns for Both Teams

Golden State was playing Game 2 without veteran swingman Andre Iguodala. His chronic right knee issue swelled up again. It was the 13th time in 14 games he’s been unable to play. On a positive note, Gary Payton II returned after missing 10 games with a fractured elbow.

Gary Payton II returns from injury and checks in for his first NBA Finals game to a huge applause 👏 pic.twitter.com/X6tgPGLglm

Boston center Robert WIlliams III, himself plagued by persistent knee woes during the playoffs, left the game and didn’t return following a collision with teammate Marcus Smart. His status for Game 3 is uncertain at this time.

Look for Action on Warriors

Historically, Boston has more NBA championships. Golden State has the recency edge when it comes to winning, however and don’t think NBA bettors are going to forget that.

Warriors bounce back to get the win at home ⚡

The #NBAFinals are all tied up heading to Boston! pic.twitter.com/PiRPEFAnhK

Golden State has proven to be the better team so far in six of eight quarters. Look for there to be plenty of action on the Warriors in the lead up to Game 3. Expect this line to shorten.