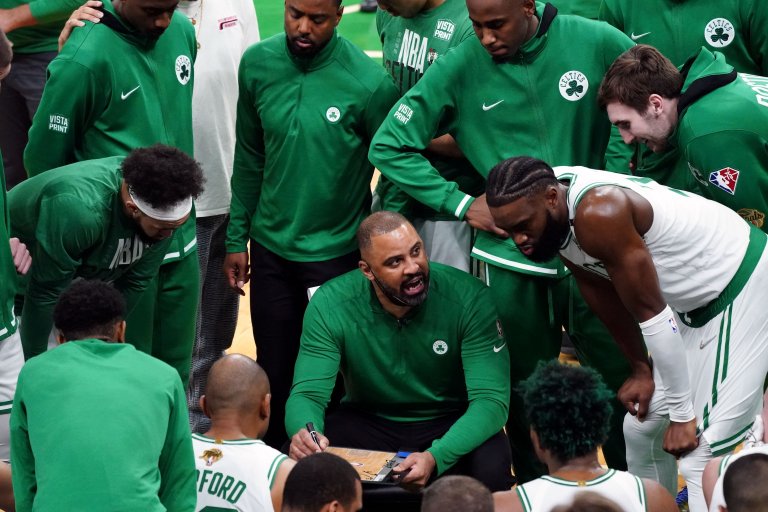 2022-23 NBA Coach of the Year odds have been released
Ime Udoka, fresh off a Finals berth in his first season with Boston, is the favorite at +750
See complete odds below, plus analysis and best bets to win the award next season

With the NBA Draft in the rearview and free agency in full swing, it’s time to continue our quest for value in the NBA Futures market. Every day it seems like more season awards categories are added for us to peruse, and our focus in this article will be the Coach of the Year odds market.

Odds as of July 8th at DraftKings Sportsbook.

Boston’s Ime Udoka opened as a strong favorite to win the award in virtually every online sportsbook that offers NBA betting. He’s fresh off a wildly successful first year with the Celtics, and while there’s plenty of reasons to back him, you shouldn’t be running to the window to bet him at his current price.

Udoka led Boston to an NBA Finals appearance last season, overcoming a pretty mediocre start. They finished 31-10 over the final 41 games of the regular season and graded out as the second-best team in Net Rating (7.4), and the number one club per Defensive Rating (106.2).

No one expects the Celtics to take a step back this season, as they currently boast the shortest price tag in the NBA Championship odds. Their young core is locked in for the next few seasons, and they just bolstered their guard depth with the addition of Malcolm Brogdon, who’s a top-four contender in the Sixth Man of the Year odds.

Udoka literally coached circles around Steve Nash in the playoffs, and held his own versus Mike Budenholzer, Erik Spoelstra and Steve Kerr, three of the most respected names in the profession.

If all that success wasn’t enough to earn him the award last season, it makes you wonder what he’ll have to do to win it next season. Unless Boston boasts the best record in the East by a convincing margin, Udoka’s body of work won’t look nearly as impressive as some of the longer shot contenders behind him who’ve completely turned their teams around.

One such coach with that potential is New Orleans’ Willie Green. The 40-year-old inherited a bad situation in the Big Easy and has helped turn the Pelicans into what looks like a potential contender for the upcoming season.

In his first full season in New Orleans, Green and the Pels overcame a 1-12 start to sneak into the playoffs and take the heavily favored Phoenix Suns to six games. They improved their scoring defense by 6 points from the previous season and added five additional wins. All without Zion Williamson, the cornerstone of the franchise.

Griff: “We’re really excited to see what the core of this group can do together.”

Willie Green says he feels like it could be “scary” for other teams when the team adds a healthy Zion to the lineup from last year.

Zion just inked a mega-extension with the club and should be a full go for next season. His presence alongside Brandon Ingram, CJ McCollum, Herbert Jones and Jonas Valanciunas gives them a formidable starting five and one that should significantly improve upon their 36 wins from a season ago.

If Green can lead them to 50-plus wins and a top-four spot in the West you have to like his chances to win Coach of the Year, especially at his +1800 price tag.

NBA Coach of the Year Odds – Don’t Sleep on McMillan

Another long shot worth paying attention to is Atlanta’s Nate McMillan. The Hawks completely overhauled their roster this offseason, bringing in another star in Dejounte Murray to complement Trae Young, while massively upgrading their defense and toughness.

Now that the dust has settled a bit I’m excited to watch Dejounte Murray in a different context where he isn’t asked to be the go-to guy.

Both him and Trae Young saw over 80 touches per game, so I’m interested in how Nate McMillan utilizes these two on the offensive end.

Atlanta was a disappointing 43-29 last season and a first-round playoff casualty. But don’t forget this team made it all the way to the Eastern Conference Finals two years ago. The upgrade on offense and commitment to improving one of the conference’s worst scoring defenses could lead to a massive increase in their win total.

If that happens, McMillan will get plenty of credit making his +2500 price tag an enticing low risk, high reward wager.