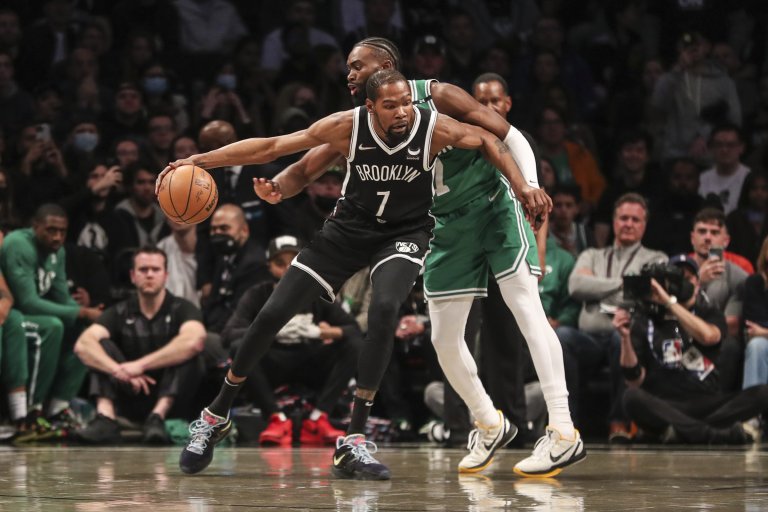 Rumors of Kevin Durant being traded to the Boston Celtics popped up Monday morning (July 25)
The Celtics championship odds improved to +450
Below, find out how the Celtics could pull off a blockbuster deal for Durant

Since the moment he made his formal trade request out of Brooklyn, Kevin Durant has been the talk of the NBA offseason. The 2x NBA champion and former NBA MVP instantly makes any team he joins a serious title contender, logic that is backed by the rapidly improving Boston Celtics championship odds.

As of Monday morning July 25, the Celtics were named as the newest team to jump into the Durant sweepstakes. Unlike some of the other NBA teams looking to acquire the lethal scorer, Boston actually has enough trade ammunition to get a deal done.

The Celtics have been viewed as the betting favorite to win the 2022-23 NBA Finals for quite some time now. They obviously reached the Finals last year and made a big splash early in the offseason by acquiring guard Malcolm Brogdon.

A minor change in the grand scheme of things. However, a change, nevertheless. Clearly, the NBA betting world thinks there’s some truth to the new Durant rumors.

The Nets and Celtics entered trade discussions for Kevin Durant, per @ShamsCharania

Every team in the NBA would like to have a player of Durant’s caliber on their roster. He’s one of the best scorers in league history and currently +850 in NBA MVP odds.

However, the issue for most teams is they simply don’t have enough in terms of young talent and/or draft capital to get the Nets to agree to a trade. The Celtics, on the other hand, don’t have such an issue.

Between Jaylen Brown, Derrick White, Marcus Smart, and future first-round picks, the Celtics front office can build an extremely attractive trade package for Durant. If the Nets are serious about moving the superstar forward this offseason, it’s hard to imagine them getting a better offer than what the Celtics can do.

At +450, the Celtics are the clear favorites to win the 2022-23 NBA Finals. However, expect this number to be extremely fluid over the next few weeks.

If the Celtics actually land Durant, their odds will shorten even more. If trade talks with Brooklyn fizzle out, the Nets could see their odds shift back to +550, where they’ve been for most of the offseason.

No matter what happens, the Celtics engaging in trade talks for Durant is certainly noteworthy. A Tatum-Durant duo might be the best scoring partnership in the NBA.