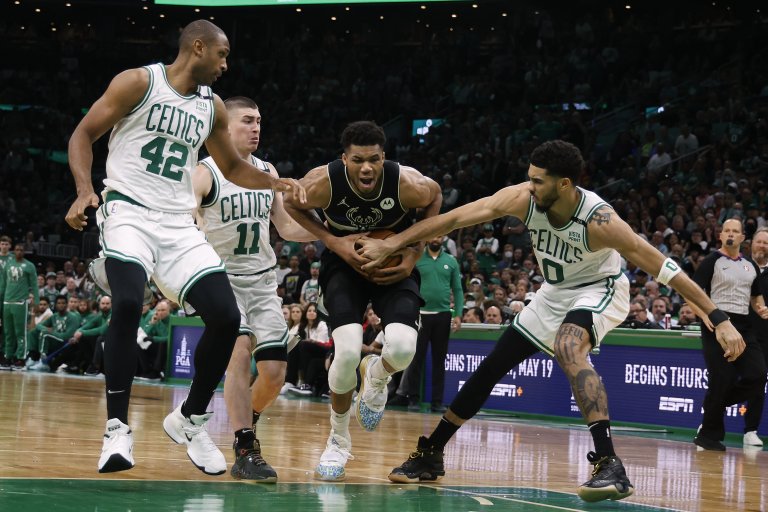 The Boston Celtics and Milwaukee Bucks lead the way in the early NBA Eastern Conference odds. Boston is priced a shade ahead of Milwaukee at +200, with the Bucks sitting at +225. Coming off a run to the Finals, the Celtics made meaningful upgrades in the offseason, trading for Malcolm Brogdon and signing Danilo Gallinari.

Milwaukee is far clear of the next group of teams, with the Miami Heat, Brooklyn Nets and Philadelphia 76ers all tied up in the latest NBA odds at +650.

Odds as of Jul 25 at BetMGM. Claim this BetMGM promo code before betting.

The Celtics just got to within two wins of a title, then added complementary rotation pieces in Brogdon and Gallinari. Milwaukee likely would have beaten the Celtics in the second round if fully healthy, and won the Finals in 2021. The Bucks have the best player in the league, and still boast an exceptional record when Giannis Antetokounmpo, Jrue Holiday and Khris Middleton are all healthy.

The Nets and Celtics entered trade discussions for Kevin Durant, per @ShamsCharania

These are the two best teams in the Eastern Conference as it stands and by a comfortable margin. Milwaukee is running it back, even adding Joe Ingles to a well-fitting cast of role players around their big three. Boston has even entered the Kevin Durant sweepstakes, which has unsurprisingly shortened their NBA Championship odds.

Both of these teams have shown they can deliver in the postseason. While they have their respective flaws, Boston and Milwaukee are both two-way forces with top-end talent and solid depth. Compared to some other East contenders, injury risk is relatively low for their stars.

1 YEAR AGO TODAY 🏆
Giannis had one of the greatest performances in NBA Finals history!

It’s pretty easy to talk yourself into betting on either of these teams at these prices. Milwaukee is probably slightly better value of the two right now, but it’s not unreasonable to have the Celtics as East favorites after adding impressive depth to their Finals team.

Dare To Believe in the Sixers

Who knows what the Nets will look like by opening night, let alone the playoffs. Miami is reliant on an aging Kyle Lowry and injuries hobbled Jimmy Butler at points in the postseason. Of course, the Sixers have a healthy dose of downside too with James Harden’s conditioning and playoff woes plus Joel Embiid’s knack for suffering injuries late in the season.

Give him his respect. #TheProcess pic.twitter.com/lUkvhQ2fDR

Philly has considerable upside next season, too. While Brooklyn and Miami have been generating headlines as the center of trade speculation, the Sixers have quietly upgraded their roster around Embiid. The Cameroonian again comes into the season among the NBA betting favorites for MVP after near misses in the last two seasons. Instead of dumping Tobias Harris’ salary as was rumored, Daryl Morey added toughness, defense and shooting in the form of De’Anthony Melton, P.J. Tucker and Danuel House.

It’s a case of needing to see it to believe it with Harden’s improved conditioning, but Harden’s decision to accept less money created much-needed flexibility for the Sixers this offseason. Even if Harden doesn’t get near to what he was in Houston, a Harden, Embiid and Tyrese Maxey core can be dangerous with the pieces they now have around them.

A lot has gone wrong for the Sixers over the last few years, and they have disappointed bettors on numerous occasions. Yet, the ceiling is clearly higher this season than it was in 2021-22. They are the best value wager of the three teams at +650.

Along with the Knicks, these other teams have expressed interest in trading for Donovan Mitchell:

It’s also worth keeping an eye on the Raptors, who are reportedly among the teams interested in Donovan Mitchell, alongside their rumored pursuit of Durant. Toronto’s odds will come tumbling from +1600 if they manage to acquire Mitchell or Durant without giving up Pascal Siakam or Scottie Barnes.