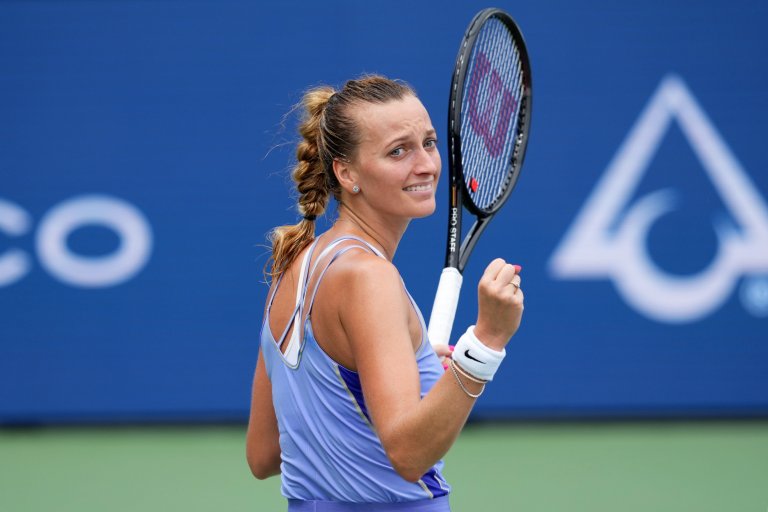 Petra Kvitova, of Czech Republic, reacts to advancing to the final after defeating Madison Keys, of the United States, during a semifinal match of the Western & Southern open tennis tournament, Saturday, Aug. 20, 2022, at the Lindner Family Tennis Center in Mason, Ohio.

At a Western & Southern Open with a stellar field, a qualifier and an unseeded player have made the final
Those two are not just random, though, Caroline Garcia is a former No. 4, Petra Kvitova a former No. 2.
The odds are close; scroll down as we break down the matchup and make a pick.

All of the favorites to win the Western & Southern Open fell away.

And the two left standing at the end are unseeded Petra Kvitova and qualifier Caroline Garcia.

Odds as of Aug. 20 at FanDuel. Use this FanDuel Sportsbook promo code to bet on the Western & Southern Open.

They are not just your random qualifier or unseeded player; the 28-year-old Garcia and 32-year-old Petra Kvitova have been top-five players.

Kvitova has been as high as No. 2. And she is a two-time Grand Slam champion.

So this week has been a renaissance for the Czech. And it’s been the continuation of a major hot streak for Garcia, a player who has all the talent in the world but whose head has too often been her Achilles’ heel.

It was a hard match to predict: between a player you might expect could falter so close to a big title in Garcia (and has played a lot of tennis out of the qualifying), and a powerful player in Sabalenka who just can’t get out of her serving slump.

In the end, it was a match interrupted twice by rain when Garcia had the momentum.

And even that didn’t stop her. She came back after the second rain delay a break up at 3-1, and she took it over the finish line as her opponent faltered.

Sabalenka had seven double faults. But mostly, Garcia did a better job converting on break points.

Kvitova was almost out of the tournament in the first round to Jil Teichmann (and it wouldn’t have been a surprise to many, as we even picked Teichmann to win it).

But she pulled through. Her toughest opposition was Ons Jabeur, whom she defeated in a roller-coaster match (6-1, 4-6, 6-0). Keys (Swiatek, Rybakina) and Ajla Tomljanovic (Badosa, Kudermetova) took care of some of the other dangerous opponents in their half. And Simona Halep withdrew after her first-round win.

Kvitova had 10 double faults, which was far too many.

But overall her serve was a key; she won nearly 82 per cent of her first-serve points.

And on second serves when she didn’t double fault, she won the point nearly 60 per cent of the time.

The biggest difference was that she was better on saving break points (6-of-8) than Keys (5-of-12).

Both players won Fed Cup matches when they were on home turf.

Beyond that, they haven’t met in more than three years. Kvitova leads 3-2 on outdoor hard courts, although Garcia won their only meeting in Cincinnati, all the way back in 2015.

For what it’s worth, Kvitova has won three of their last four meetings, although the data is old and Kvitova didn’t play Garcia during the Frenchwoman’s best year, 2018.

Garcia has faced plenty of hard-hitting this week. But she hasn’t played a lefty since July (Misaki Doi, on clay). And she  has only faced one top-flight lefty (Angelique Kerber, 2021 Dubai) in the last three years.

She might have issues making an adjustment. And if Kvitova can serve as well as she did Saturday – without all the double faults – she should take this home.