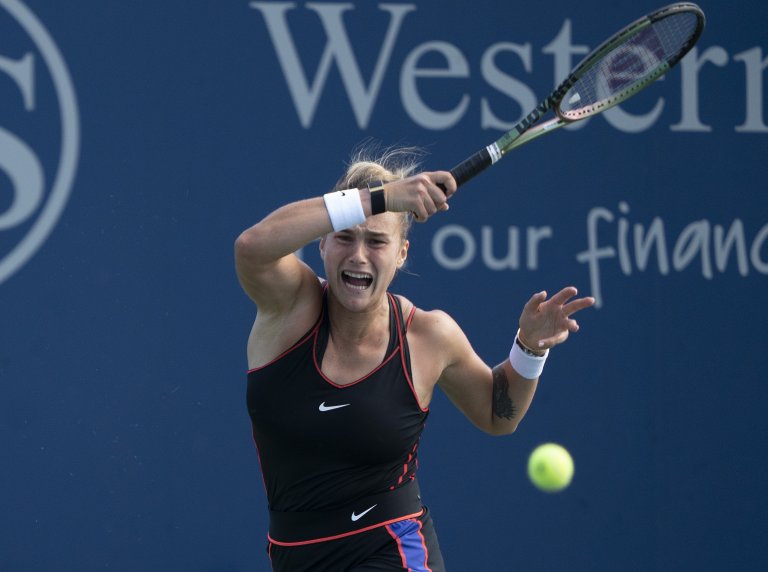 Aryna Sabalenka is the only seeded player in the Western & Southern Open’s final four
She’ll face Caroline Garcia, in her best form in years, in the second semifinal Saturday (1pm ET)
Sabalenka will be the favorite; scroll for our analysis of the matchup, and best bets

Of the four semifinalists at this year’s Western & Southern Open – three of them of the unexpected sort – the most unexpected is likely France’s Caroline Garcia.

The 28-year-old had to come through the qualifying, and is the lowest ranked of the three unseeded players.

Odds as of Aug. 19 at BetMGM. Use this BetMGM Sportsbook promo code to bet on the Western & Southern Open

Garcia is a former No. 4. And that came just four years ago. But as she pointed out after the match, when you lose a few matches, they forget about you.

And suddenly, when you win a few, you’re no longer a “loser”.

She’s always been considered one of the most complete players out there – tall, good serve, good mover, good net skills, good everything.

But it’s the biggest muscle in the human body – the brain, specifically the tennis brain – that has been her biggest impediment.

Is this a new era?

Garcia began the season 9-11 in singles. She’s 22-4 since, with two titles, and has gone from No. 75 in the rankings to earning a seed at the upcoming US Open.

Her straight-sets win over the very, very solid Jessica Pegula was a surprise, although with a first-serve percentage of points won below 50% in the first set, Pegula put herself behind the eight-ball.

Sabalenka Doing it Despite Double-Faults

As for Sabalenka, still only 24, the service woes continue even though she says she’s exploring every possible solution.

On the positive side, it’s definitely a LOT better than it was at the start of the season.

Zhang only had two double faults. But her success on second serve was at an unacceptably-low 21%.  There were 11 breaks of serve in all in this one. And if Sabalenka gets broken (or breaks herself) five times against Garcia, she will lose.

The Frenchwoman has been extremely impressive on serve this week. In qualifying she was broken only once in two three-set matches.

In the main draw, in four matches, she has been broken just three times, and saved 15-of-18 break points against her serve.

The two haven’t faced each other since 2018, when Garcia had her best year. In those matches after the US Open, she was ranked at her career high.

The Belarussian would do well to remember their match in Cincinnati, rather than the one in Zhuhai.

Except perhaps for the serving.

You get the sense that Sabalenka’s survival skills in terms of her serve are going to run out in this one.

It’s not as though she’s going to solve her serving woes overnight. And with the way Garcia has been taking care of her own, plus the confidence she’s built up during the week, she may prove to be the sturdier of the two players mentally on this big occasions.

This is not a high threshold, with these two. But it’s notable all the same, and will be the key to victory.