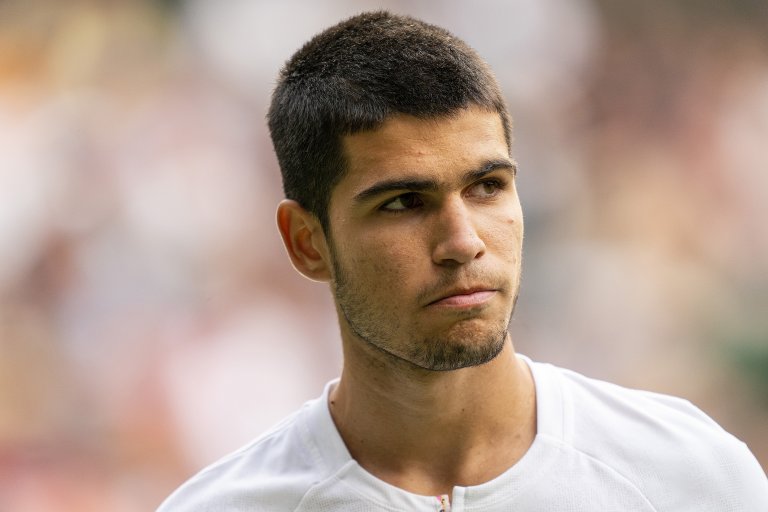 No. 1 seed Carlos Alcaraz meets unseeded Lorenzo Musetti in the Hamburg final
Pre-tournament favorite Alcaraz is a heavy favorite for the final, which goes Sunday at 9 am ET
Read on as we break down this matchup between “Next-Gen” players

At 19, Carlos Alcaraz is a year younger than his opponent in Sunday’s singles final at the Hamburg European Open.

But he has a far more impressive resumé.

Odds as of July 23 at Barstool Sportsbook

Already No. 6 in the world, the 19-year-old Alcaraz was the strong favorite to win the Hamburg Open before the tournament even began.

He has done nothing to dispel that mantle. In fact, even though this was his first tournament since Wimbledon, he worked his way into the event with a tough first round and has looked nothing but the favorite since.

Straight Sets for Alcaraz over Molcan

Alcaraz lost his opening set against an unheralded German wild card. And he squeaked through that one in a third-set tiebreak.

But since then, he has been impressive.

His semifinal win over Slovak lefty Alex Molcan took just over 90 minutes. And after a tight first set that went to a tiebreak, he rolled to a 6-1 win in the second.

Alcaraz faced just three break point on his serve,  although he was broken twice. But he created 11 opportunities on Molcan’s serve, and converted six of them.

Still, Molcan fought back numerous times when Alcaraz was a break up.

It was a clever match, full of drop shots and changes of pace – with the extra added wrinkle of Molcan’s leftiness.

For Musetti, who is in the first ATP Tour-level final of his career, the 6-3, 7-6 (3) victory over the streaking Francisco Cerundolo took nearly two hours.

And if the Argentine might have been a a little worn out, Musetti continued with a solid, consistent week of the type he hasn’t quite managed that often in his young career.

Musetti did himself no favors when he inexplicably decided to go for the underarm serve at match point, serving at 5-3 in the second set.

On match point to play the first ATP final of his career, Lorenzo Musetti attempted an underarm serve 😮

He lost the point. And in the end he had to battle back and win it in a tiebreak.

Where Alcaraz had to battle some clever play in his semifinal, this final will be far more straightforward – at least on Musetti’s side of the net.

And that is a dynamic that leans primarily in the Spaniard’s favour.

The two players are both 6-foot-1. But while Musetti moves fairly well side to side, he’s not nearly as agile – or as eager – when he has to move into the court. And Alcaraz, by far the speedier of the two, will make sure to test that as often as he can.

Alcaraz’s forehand is better than Musetti’s. His backhand is more powerful. And he serves harder.

He has the edge anyway you slice it. Which is why the odds are so heavily in his favour.

And this is Musetti’s maiden trip to an ATP final.

That is old hat to Alcaraz, who has four titles on his resumé already in the first half of the season.

All Odds for Alcaraz

Alcaraz is less of a favorite against Musetti than he was against Molcan. But it actually feels like a better matchup for him, because of all the factors elaborated upon above.

So, where is the best betting value?

If you think that Musetti can stay with Alcaraz as Molcan did – at least for awhile – the odds that there will be at least one tiebreak in the match are at +210.

A little less attractive are the odds for Alcaraz to win straight sets. But they’re better than the moneyline, which is -625; a straight-sets win stands at -186.