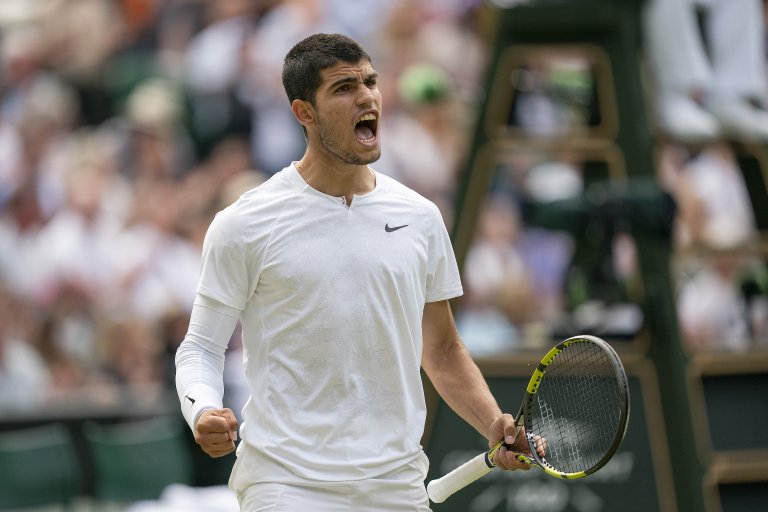 The semifinals of the Hamburg European Open will be played on Saturday, July 23rd
Carlos Alcaraz is the heavy favorite with -900 odds to win
Continue below for odds, preview, and best bet prediction

The two semifinal matches of the Hamburg European Open will be played tomorrow morning. Number one seed Alcaraz will take on Alex Molcan in the second match. The two are set to take the court at 10:50 am ET.

Odds as of July 22nd at DraftKings.

No surprise here that Alcaraz is the favorite. He is now the last remaining seeded player at the tournament.

Alcaraz Storms into the Semifinals

19-year old Alcaraz stunned Karen Khachanov in the quarterfinals earlier on Friday. The Spaniard defeated the Russian 6-0, 6-2, to remain undefeated at the 500 level this season. He’s now 13-0, all of which is on clay.

In his quarterfinal match, he defeated his opponent by firing off 21 winners to just seven unforced errors, marking one of his best matches of the year. The number one seed was able to save his only break point he faced all match, and was five of 11 on his own break chances.

Feeling GOOD! ? Semis! ? Thanks for your support! ? @hamburgopen

Alcaraz is on top of the list with 23 clay wins on tour this season, including three clay-court titles. If he’s able to reach the finals here in Hamburg, he’ll break into the Top 5 of the ATP Rankings for the first time in his career.

Molcan has had an impressive tournament over the past three matches. He went on to upset Pablo Carreno Busta in the second round, winning in three sets. This earned him his spot in the quarterfinals, where he went onto beat Borna Coric 7(9)-6(7), 2-0, when Coric retired from the match.

The 24-year old is still looking for his first ATP Tour title, and will be looking to reach his third final of the season.

Not the way anyone wants to win ?

Alex Molcan advances to his first ATP 500 semifinal after Borna Coric is forced out due to injury, 7-6 2-0 (ret).#HamburgOpen pic.twitter.com/BgJzVETdSe

The past couple of weeks have been quite defining for the Slovakian. He’s currently on track for a new career-high ranking. If he were to win the title here, it would put him in the Top 30.

This is the first time these two will go head-to-head in their careers. Their current head-to-head stands at 0-0.

With -900 odds to win the match, it’s hard to say to bet against the Spaniard. So let’s try and find a better bet.

Molcan will look to give Alcaraz trouble, but this might be a simple case of the Spaniard being able to outplay his opponent. Alcaraz is the more experienced and successful on clay, no one has really been able to beat him.

Yes, it seems like Alcaraz will be able to move on without much trouble, but the best bet is in total games.