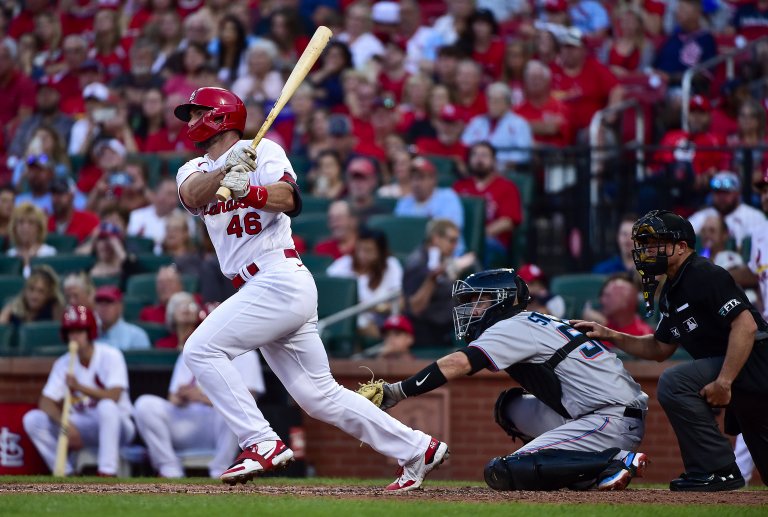 The Cardinals and Phillies will meet for the first of six meetings over the next 11 days on Friday, as they open up a three-game set in Philadelphia. St. Louis enters play with the NL’s fifth best record at 43-35 after just taking two of three from Miami.

Philadelphia on the other hand has dropped two straight as they enter play on Thursday night against Atlanta. Oddsmakers expect Philly’s recent struggles to continue, as they’re siding with the Cards as road chalk.

St. Louis opened up as a -130 moneyline favorite, in a game with a total of 9.5. First pitch is scheduled for 6:05 pm ET at Citizens Bank Park in Philadelphia, PA, with clouds and 90 degree game-time temperatures in the forecast.

The Cards, who are currently a top-12 contender in the World Series odds, will give the ball to Miles Mikolas. The 33-year-old is garnering All-Star buzz despite a 5-5 record. That’s because he’s been sensational all year, especially over his past four starts, and is on pace for his best statistical season since he went 18-4 with a 4.1 WAR in 2018.

Yet another reason why W/L record is stupid. He’s pitching like an ace though and has been one of the best pitchers in the NL this year despite the 5-5 record.

He’s allowed two runs or less in four straight starts, pitching at least 6 innings in each outing. Two of those performances lasted at least 8 innings, and he’s posted a 27-to-4 strikeout-to-walk ratio over that stretch.

The last time he faced the Phillies was back in 2019, and he was fantastic. He pitched 7 innings of scoreless ball in a 6-0 victory, yielding only three hits.

Philadelphia will turn to southpaw Bailey Falter who’s been much less impressive than his counterpart. The 25-year-old has split his time between the Phillies and Triple-A Lehigh Valley this season, making three starts with the big club.

He’s failed to make it out of the 5th inning in two of those outings, and coughed up three runs and two homers to light-hitting Washington in his last appearance.

The Cardinals lineup is anything but light-hitting. St. Louis ranks fifth in average, sixth in runs per game, and top-nine in slugging and OPS.

They’re led by Paul Goldschmidt, the heavy favorite in the NL MVP odds. The 34-year-old leads MLB in batting average, while ranking second in RBI, OPS and WAR, and fourth in slugging.

Paul Goldschmidt does not care about your NRFI ?

He almost just hit it out of the park… pic.twitter.com/D7Th6Vcebd

Tommy Edman showed off the bunnies with this catch?

However, Edman is one of the best defensive players in the league, something he showcases nearly every single night.

Philadelphia meanwhile, is starting to feel the effects of life without Bryce Harper. The 2021 NL MVP is out indefinitely after breaking his thumb on Saturday. He reportedly underwent successful surgery on Wednesday, but there’s still no timetable for his return.

Imagine being the greatest hitter in the sport and your season could potentially be over.

Harper’s Phillies were one of the top lineups in baseball prior to his injury ranking in the top-10 in most offensive categories. Entering play on Thursday however, they’d scored just four runs over the past two games, recording only 12 hits.

Life won’t get any easier on Friday for Philadelphia with how well Mikolas has been pitching. Conversely, Falter on the mound represents a pretty favorable matchup for the Cards bats to attack.

St. Louis has crushed lefties like Falter all season, posting a slugging percentage of .443 and an OPS of .781, compared to .399 and .716 numbers in those categories against righties. Six of the top-eight hitters they’ll trot out against Falter will bat from the right side, and I expect them to him hard just like the Nationals did last week.