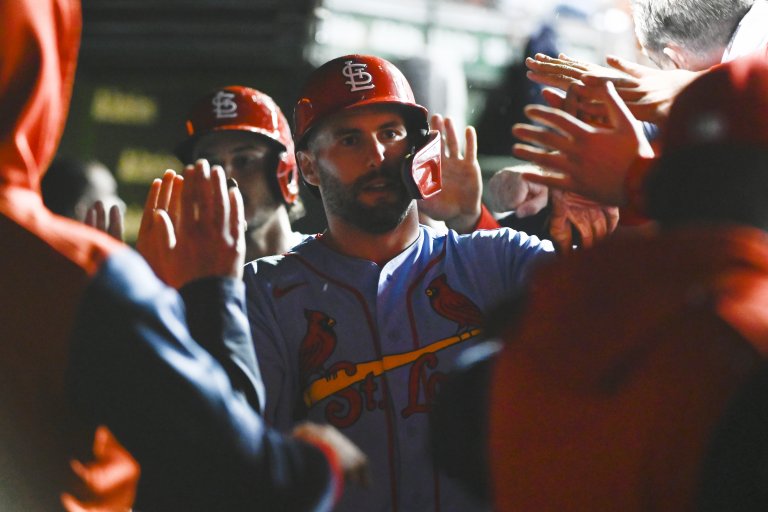 The St Louis Cardinals are -140 road favorites over the Chicago Cubs in the weekly MLB Sunday Night Baseball game on Sunday, June 5
Chicago and St Louis have split the first four games of this five-game series
All of the odds, picks, predictions and best bets are analyzed in the following story

It appears that the Chicago Cubs (23-31,11-19 home) are turning the tide on the St Louis Cardinals (31-23, 15-12 away). Chicago has won four of the last six games against St Louis. Prior to that stretch, the Cards won seven in a row over the Cubbies.

Chicago will seek to win a second straight series from the Cardinals as they play the fifth game of this weekend series in the Second City. Each team has won two games thus far in the set.

Oddsmakers, though, are going with the Redbirds. It’s St Louis that is set as the -140 favorite to take Sunday night’s rubber match. Chicago is 2-7 against the runline over the past nine games.

First pitch at Wrigley Field is set for 7:08 pm ET on Sunday, June 5. In the forecast, there’s rain, 3 mph wind and a temperature of 72 degrees.

At odds of -140, the Cardinals are offering an implied probability of victory of 58.33. A successful $10 wager on the Cardinals would be producing a return of $17.10.

In MLB betting trends, in both the moneyline and spread splits, public betting is backing the Cardinals at 52%. The public is also leaning toward the under at a rate of 52%.

As far as the NL Division odds go, the Cardinals are the +280 second betting option in the NL Central. The Cubs are the third betting choice but at a distant betting line of +6000. In the World Series odds, St Louis is 13th at odds of +3000.

Cardinals right-hander Adam Wainwright has led the NL in complete games in each of the past two seasons. He’s worked seven innings in three of his past five starts.

Wainwright was 3-1 in May with a 1.69 ERA. He has allowed a home run in three of his last four starts, though.

Cubs lefty Justin Steele got the win in a 9-0 shutout of the Milwaukee Brewers on April 9. In nine starts since he’s 0-5 with a 6.17 ERA.

In his last two starts. Steele has been roughed up for 10 earned runs over seven innings pitched. That works out to a 12.86 ERA.

Every single Justin Steele start he gets rocked the 2nd time through the order. Maybe the bullpen would make more sense??? #Cubs

St Louis slugger Paul Goldschmidt saw his hitting streak snapped at 25 games in the opener of Saturday’s doubleheader. He did get a hit in nightcap Goldschmidt is 1-for-3 (.333) with a homer and two RBI when facing Steele.

For the Cubs, Ian Happ has absolutely ripped the cover off the ball against Wainwright. He’s 8-for-20 (.400) with four homers and six RBI. That includes a pair of multi-homer games.

Cubs southpaw Justin Steele has been dreadful in his last two starts. He’s winless since April 9 and shows a double-digit ERA when facing St Louis.

On the other hand, St Louis veteran Adam Wainwright has proven to be a success story when on the hill at Wrigley.

Best to go with the proven track record in this one.