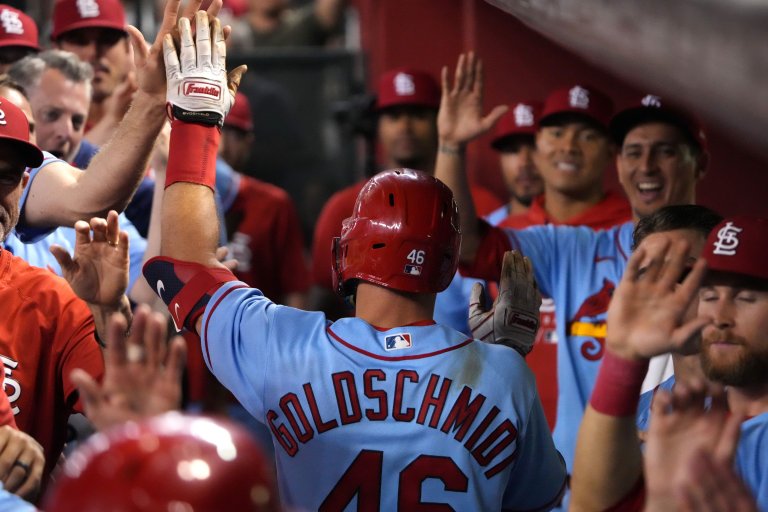 No team in baseball is hotter than the St. Louis Cardinals (69-51, 29-30 away) at the moment. The Cards began the week riding an impressive seven-game winning streak, and are 15-3 in August. The NL Central leaders will look to pad their lead atop the division on Tuesday, as they clash with the Chicago Cubs (52-68, 26-35 home) in a day/night doubleheader.

St. Louis opened up as -190 moneyline favorites in Tuesday’s first game, in a contest that features a total of 8.5. First pitch is scheduled for 2:20pm ET at Wrigley Field in Chicago, Illinois, with clear skies and 78 degree game time temperatures in the forecast.

The Cards, who entered play on Monday as a top-eight World Series odds contender, will give the ball to veteran Adam Wainwright. The 40-year-old is fresh off back-to-back stellar starts, and was flawless the last time he faced the Cubs.

Wainwright shutout Colorado over 7 innings last time out, which followed a 9-inning, three-hit performance against rival Milwaukee. He faced Chicago at home earlier this month, blanking them over 7 innings, while scattering just six hits.

Success against the Cubs is nothing new for the ageless wonder though, as he’s limited them to two runs total in 15 innings this season.

Get ready to cheer on for Javier Assad and his awesome glasses in his MLB debut with the @cubs tomorrow! Here are some of my favorite pics of him with the @IowaCubs. pic.twitter.com/8oNto6Y3DQ

He’s posted a 2.66 ERA over 21 total starts, striking out 37 batters against only seven walks in 15 outings at Triple-A Iowa. Assad features a plus fastball that can touch 96 mph, and he’ll need that pitch as well as the rest of his arsenal to be firing on all cylinders to slow down this St. Louis lineup.

That’s because the Cards’ hitters are absolutely mashing at the moment. They’re slashing .298/.378/.525 this month, and are fresh of scoring 27 times over the weekend in Arizona.

Paul Goldschmidt leads MLB in average, while ranking top-three in home runs, RBI and WAR. He’s a lofty favorite in the NL MVP odds, while teammate Nolan Arenado has the next shortest odds. The duo rank first and second in the NL in WAR, yet it’s a wiley veteran who’s been making just as big of an impact recently.

2 home runs
5 for 5 at the plate
Countless standing ovations pic.twitter.com/DqJoynSPng

That would be Albert Pujols who is now just eight home runs shy of 700. The 42-year-old is hitting .442 with seven homers and 17 RBI over the past month. Good luck shutting this unit down.

The Cubs on the other hand, are in the midst of a nice little run of their own. They’d won five of six entering play on Monday, and just took two of three from Milwaukee, St. Louis’ main competition for the division crown.

They’ve scored 29 runs over that stretch but could be minus some pop on Tuesday. Patrick Wisdom, the team leader in home runs and RBI is currently day-to-day, after injuring his finger in Saturday’s come from behind victory.

While both teams enter in good form, the Cardinals are too hot to fade at the moment. With all due respect to Assad’s minor league numbers, he hasn’t seen anything close to the pop St. Louis will throw at him.

Wainwright on the other side is as steady as they come. He’s been fantastic in his past two outings, and against Chicago this season. Expect his solid stretch to continue.

Entering play on Monday, St. Louis had taken three straight from the Cubs, and six of the past eight meetings. Five of those victories were by multiple runs, and I like them to get the jump on Chicago early.

The Cardinals average the third most runs in the first 5 innings of play, so target them in the early game on Tuesday in that market.