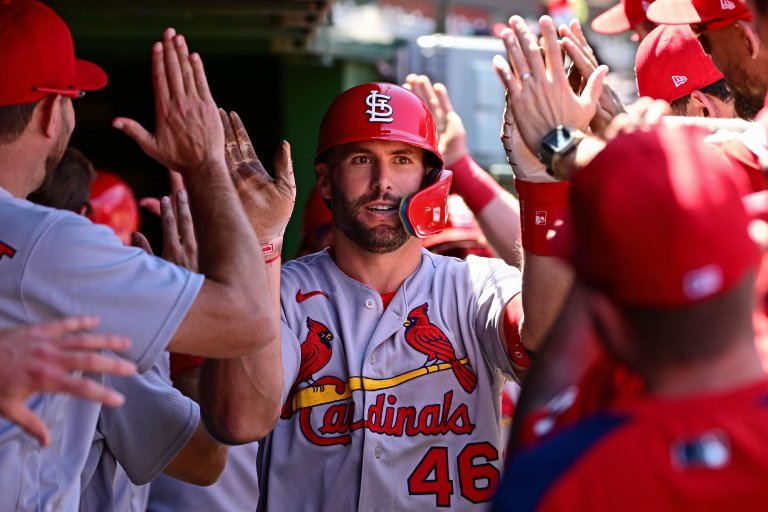 It figures to be a long day of baseball at Wrigley Field on Saturday as the Chicago Cubs host the St. Louis Cardinals in a day-night doubleheader.

Odds as of June 4th at BetMGM.

The weather forecast calls for partly sunny skies, a high of 66 degrees and wind from the northeast at 5-10 mph.

In the opener, the Cardinals will call up Johan Oviedo from Triple-A Memphis to make his Cardinals’ season debut.  He will oppose rookie Matt Swarmer (0-0, 1.50).

At Memphis, Oviedo was 4-2 with a 5.58 ERA in 10 starts. He had a no-decision his last time out against Iowa last Saturday, getting tagged for five runs and five hits in 5.1 innings with eight strikeouts and three walks.

The last time Johan Oviedo pitched against the Cubs: pic.twitter.com/pgWlR53IUc

The Cubs’ Ian Happ is 3 for 4 with a double, triple and two walks off Oviedo.

Swarmer will be making his second major league start after debuting Monday against the Milwaukee Brewers at home in the first game of a doubleheader.

Swarmer did not factor in the decision but turned in a quality start. He allowed four runs (one earned) on five hits over six innings while striking out six and walking one.

Odds as of June 4th at BetMGM.

In a game that will be televised by Fox, the Cubs are -115 favorites and have an expected win probability of 53.49%. There is a 40% chance of showers after 8 p.m. with the gametime temperature forecast for 62 degrees with the low dipping to 57 and a 5-10 mph wind from the northeast.

In the second game, rookie Andre Pallante will make his first MLB start for the Cardinals while Caleb Kilian will be called up from Iowa to make his major league debut for the Cubs.

In his most recent appearance, Pallante pitched a career-high 3.1 innings and got his first MLB win Monday against the visiting San Diego Padres. He allowed one run and five hits while striking out five and walking none.

Pallante, who will be facing the Cubs for the first time, has pitched 11 scoreless innings on the road over eight appearances this season. He has a 2.45 ERA in eight games during the day.

Kilian was 2-0 with a 2.06 ERA in nine starts at Iowa but is coming off a lackluster performance in his last outing. In a five-inning stint against Memphis that resulted in a no-decision, the 25-year-old allowed four runs and six hits and two walks with only one strikeout.

caleb kilian is being promoted to the cubs. to the federal landmark. another young arm that can make a difference going forward. thats exactly what we needed at the moment
pic.twitter.com/kRl09PSBGt

The San Francisco Giants drafted Killian in the eighth round in 2019 from Texas Tech and traded him to the Cubs last season. In 35 career minor leagues game (34 starts), Killian had a 9-4 record and 2.08 ERA.

Paul Goldschmidt hit a three-run home run to help key the Cardinals’ blowout Friday and extended his hitting streak to 25 straight games. He has also reached base in 39 games in a row.

The first baseman has 10 homers and 36 RBIs in his last 22 games and has +3000 NL MVP odds. Goldschmidt’s career-best hitting streak is 26 games.

The Cubs’ Patrick Wisdom hit a three-run homer. Rookie Christopher Morel extended his club record by reaching base for the 17th straight game to begin his career.

Cubs catcher Willson Contreras is expected to be available for the twinbill. He sat out Friday’s game after being hit on the left ankle by a pitch Thursday night.

I’m obsessed with this video of Willson Contreras reminding rookie Christopher Morel to breathe in a big at-bat.

Moments later, Morel drove in the winning run with a walk-off sac fly.pic.twitter.com/hWyehtr7QQ

The teams have split the first two games of a five-game series in their first meeting of the year. The Cardinals hold a 35-32 edge over the Cubs since the beginning of the 2018 season.

This is a hard doubleheader to handicap with such limited track records for the starting pitchers. Let’s go with the Cardinals – the better team – in Game 1 with the idea Oviedo is long overdue for a win.