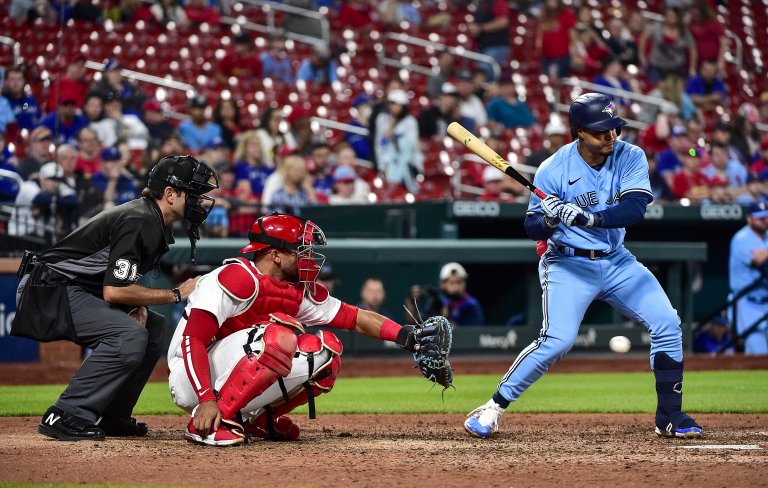 The Toronto Blue Jays are -220 home favorites over the St Louis Cardinals in an MLB inter-league game slated for Tuesday, July 26
The two teams split a pair of games earlier this season at St Louis
St Louis is 5-2 straight up in the past seven games against Toronto

They played a two-game set earlier this season at Busch Stadium and each club came away with a win. Overall, St Louis is 3-1 straight up in the past four and 5-2 SU over the last seven games against Toronto. The winning team in 11 of the past 12 Cardinals-Blue Jays meetings also covered the run line.

It’s the hometown Blue Jays who oddsmakers are setting as the -220 favorites in this game. The Cardinals are 5-4 SU all-time at Toronto.

First pitch at Rogers Centre is set for 7:07pm ET on Tuesday, July 26. Clear skies with 5 mph wind and a temperature of 80 degrees are in the weather forecast.

At odds of -220, the Blue Jays are offering an implied probability of victory of 68.75% in the MLB betting line. A successful $10 wager on Toronto would deliver a payout of $14.50.

The public is siding with the oddsmakers in the MLB betting trends. There’s 60% of moneyline and runline money backing the Blue Jays. Also, 60% of total bets favor the over. Four of the last five St Louis-Toronto games have gone over the established total for this game of 9.0 runs.

Cardinals rookie right-hander Andre Pallante is making his 27th appearance of the season but just his ninth start. He moved into the starting rotation at the beginning of June and promptly lost four of his first five decisions.

You can’t convince me that there isn’t a secret lab beneath Busch Stadium that churns out players named “Andre Pallante” who inexplicably have a low-3’s ERA despite a K/9 below 6.0.

Where do the #Cardinals keep finding these guys?

Pallante is 1-1 in his last three starts but he’s allowed 13 earned runs in 14.1 innings over that span for an ERA of 8.16. He’s surrendered six home runs in his last seven starts.

In his first full season with the Blue Jays, the won-loss record of veteran right-hander Jose Berrios is solid (7-4), even if the rest of his data is somewhat gruesome.

Corey Dickerson since coming back from the IL on July 9th

No Toronto batter has a hit off of Pallante, though both George Springer and Santiago Espinal drove in runs off of him in the one-third of an inning he’s faced Toronto.

St Louis will be playing without sluggers Paul Goldschmidt and Nolan Arenado. Neither is vaccinated for COVID-19 and thus are ineligible to enter Canada.

Between them they’ve slugged 40 homers. Goldschmidt is the +110 favorite in the NL MVP odds.